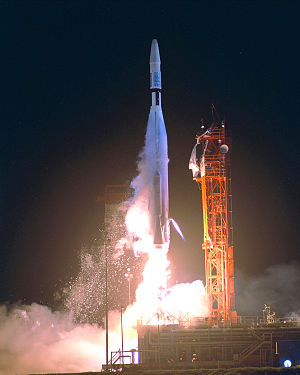 The Mariner program was a program conducted by the American space agency NASA in conjunction with Jet Propulsion Laboratory (JPL)[1] that launched a series of robotic interplanetary probes designed to investigate Mars, Venus and Mercury[2] from 1962 to 1973. The program included a number of firsts, including the first planetary flyby, the first pictures from another planet, the first planetary orbiter, and the first gravity assist maneuver.

Of the ten vehicles in the Mariner series, seven were successful. The planned Mariner Jupiter-Saturn vehicles evolved into Voyager 1 and Voyager 2 of the Voyager program,[3] while the Viking 1 and Viking 2 Mars orbiters were enlarged versions of the Mariner 9 spacecraft. Other Mariner-based spacecraft, launched since Voyager, included the Magellan probe to Venus, and the Galileo probe to Jupiter. A second-generation Mariner spacecraft, called the Mariner Mark II series, eventually evolved into the Cassini–Huygens probe, now in orbit around Saturn.

The total cost of the Mariner program was approximately $554 million.[4] 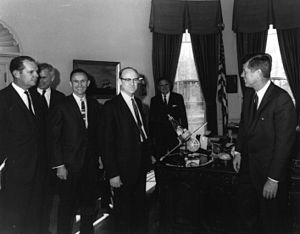 All Mariner spacecraft were based on a hexagonal or octagonal "bus", which housed all of the electronics, and to which all components were attached, such as antennae, cameras, propulsion, and power sources.[2][5] All of the Mariners launched after Mariner 2 had four solar panels for power, except for Mariner 10, which had two, and Mariner 2, which was based on the Ranger Lunar probe. Additionally, all except Mariner 1, Mariner 2 and Mariner 5 had TV cameras.

The first five Mariners were launched on Atlas-Agena rockets, while the last five used the Atlas-Centaur. All Mariner-based probes after Mariner 10 used the Titan IIIE, Titan IV unmanned rockets or the Space Shuttle with a solid-fueled Inertial Upper Stage and multiple planetary flybys.

Mariner 1 (P-37) and Mariner 2 (P-38) were two deep-space probes making up NASA's Mariner-R project. The primary goal of the project was to develop and launch two spacecraft sequentially to the near vicinity of the planet Venus, receive communications from the spacecraft and to perform radiometric temperature measurements of the planet. A secondary objective was to make interplanetary magnetic field and/or particle measurements on the way to Venus and in the vicinity of Venus.[6][7] Mariner 1 (designated Mariner R-1) was launched on July 22, 1962, but was destroyed approximately 5 minutes after liftoff by the Air Force Range Safety Officer when its malfunctioning Atlas-Agena rocket went off course. Mariner 2 (designated Mariner R-2) was launched on August 27, 1962, sending it on a 3½-month flight to Venus. The mission was a success, and Mariner 2 became the first spacecraft to have flown by another planet.

Mariner 3 was lost when the launch vehicle's nose fairing failed to jettison. Its sister ship, Mariner 4, launched on November 28, 1964, was the first successful flyby of the planet Mars and gave the first glimpse of Mars at close range.[8]

The Mariner 5 spacecraft was launched to Venus on June 14, 1967 and arrived in the vicinity of the planet in October 1967. It carried a complement of experiments to probe Venus' atmosphere with radio waves, scan its brightness in ultraviolet light, and sample the solar particles and magnetic field fluctuations above the planet.

Mariners 6 and 7 were identical teammates in a two-spacecraft mission to Mars. Mariner 6 was launched on February 24, 1969, followed by Mariner 7 on March 21, 1969. They flew over the equator and southern hemisphere of the planet Mars.[10]

Mariner 8 and Mariner 9 were identical sister craft designed to map the Martian surface simultaneously, but Mariner 8 was lost in a launch vehicle failure. Its identical sister craft, Mariner 9, was launched in May 1971 and became the first artificial satellite of Mars. It entered Martian orbit in November 1971 and began photographing the surface and analyzing the atmosphere with its infrared and ultraviolet instruments.

The Mariner 10 spacecraft launched on November 3, 1973 and was the first to use a gravity assist trajectory, accelerating as it entered the gravitational influence of Venus, then being flung by the planet's gravity onto a slightly different course to reach Mercury. It was also the first spacecraft to encounter two planets at close range, and for 33 years the only spacecraft to photograph Mercury in closeup.

Mariner Jupiter-Saturn was approved in 1972 after the cancellation of the Grand Tour program, which proposed visiting all the outer planets with multiple spacecraft. The Mariner Jupiter-Saturn program proposed two Mariner-derived probes that would perform a scaled back mission involving flybys of only the two gas giants, though designers at JPL built the craft with the intention that further encounters past Saturn would be an option. Trajectories were chosen to allow one probe to visit Jupiter and Saturn first, and perform a flyby of Saturn's moon Titan to gather information about the moon's substantial atmosphere. The other probe would arrive at Jupiter and Saturn later, and its trajectory would enable it to continue on to Uranus and Neptune assuming the first probe accomplished all its objectives, or be redirected to perform a Titan flyby if necessary. The program's name was changed to Voyager just before launch in 1977, and after Voyager 1 successfully completed its Titan encounter, Voyager 2 went on to visit the two ice giants.[3]