From Infogalactic: the planetary knowledge core
Jump to: navigation, search
For other uses, see Maroon (disambiguation). 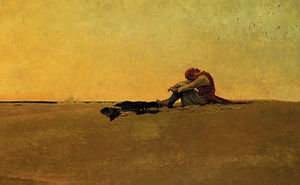 Marooning used to be the intentional leaving of someone in a remote area such as an uninhabited island. The word first appears in writing in approximately 1709,[1] and is derived from the term maroon, a word for a fugitive slave, which could be a corruption of Spanish cimarrón, meaning a household animal (or slave) who has run "wild".

In earlier centuries it was a penalty for crewmen or for captains at the hands of a crew in cases of mutiny. Then, marooning meant setting a man on a deserted island, often no more than a sand bar at low tide.[2] He would be given some food, a container of water, and a loaded pistol so he could commit suicide if he desired.[3] The outcome of marooning was usually fatal, but William Greenaway and some men loyal to him survived being marooned, as did pirate captain Edward England.

The chief practitioners of marooning were 17th and 18th century pirates, to such a degree that they were frequently referred to as "marooners." The pirate articles of captains Bartholomew Roberts and John Phillips specify marooning as a punishment for cheating one's fellow pirates or other offenses. In this context, to be marooned is euphemistically to be "made governor of an island".

During the late-18th century in the American South, "marooning" took on a humorous additional meaning describing an extended camping-out picnic over a period of several days (Oxford English Dictionary).

As a result of the Treaty of Utrecht in 1714, Sombrero island passed into the hands of the British. Captain Warwick Lake of Recruit marooned an impressed seaman, Robert Jeffrey, there on 13 December 1807. As it turned out, Jeffrey survived. A passing American vessel, the schooner Adams from Marblehead, Massachusetts, had rescued him. Still, a court-martial dismissed Lake from the Royal Navy.

The most famous literary reference to marooning probably occurs in Robert Louis Stevenson's Treasure Island in which Ben Gunn is left marooned on the island for three years.

A famous real-life marooning, only partly for punishment, was leaving the sailor Alexander Selkirk on Juan Fernández Island off the coast of Chile, in the Pacific Ocean. Selkirk, a sailor with the Dampier expedition, was worried about the unseaworthy condition of his ship, the Cinque Ports, and had argued with the captain until he left him ashore on the island where they had briefly stopped for water and food supplies. The Cinque Ports later sank with the loss of most of her crew. Selkirk was not rescued until four years later, by Woodes Rogers. Selkirk's travails provided the inspiration for Daniel Defoe's novel Robinson Crusoe. Today, one of the islands on the Chilean coast is named Alejandro Selkirk Island and another one Robinson Crusoe Island.

In 2012 Ed Stafford marooned himself on an uninhabited island off Fiji as an experiment for 60 days. He took with him no food, water, or survival equipment of any kind. What he did take were cameras to film the ordeal for Discovery Channel. Stafford completed the task and documents the psychological repercussions in his book Naked and Marooned.