From Infogalactic: the planetary knowledge core
Jump to: navigation, search
Not to be confused with Mars One or Mars I.
For other uses, see Mars 1 (disambiguation). 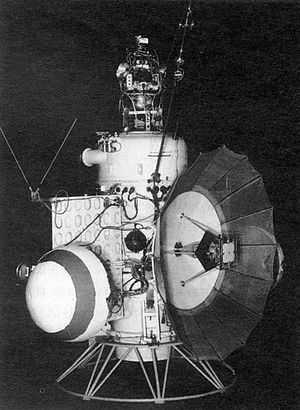 Mars 1, also known as 1962 Beta Nu 1, Mars 2MV-4 and Sputnik 23, was an automatic interplanetary station launched in the direction of Mars on November 1, 1962,[1][2] the first of the Soviet Mars probe program, with the intent of flying by the planet at a distance of about 11,000 km (6,800 mi). It was designed to image the surface and send back data on cosmic radiation, micrometeoroid impacts and Mars' magnetic field, radiation environment, atmospheric structure, and possible organic compounds.[1][2]

After leaving Earth orbit, the spacecraft and the booster fourth stage separated and the solar panels were deployed. Early telemetry indicated that there was a leak in one of the gas valves in the orientation system so the spacecraft was transferred to gyroscopic stabilization. Sixty-one radio transmissions were held, initially at two day intervals and later at five days in which a large amount of interplanetary data were collected.[1] 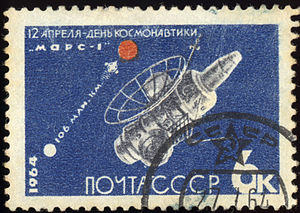 Mars 1 was a modified Venera-type spacecraft in the shape of a cylinder 3.3 m (11 ft) long and 1 m (3.3 ft) in diameter.[1][2] The spacecraft measured 4 m (13 ft) across with the solar panels and radiators deployed. The cylinder was divided into two compartments. The upper 2.7 m (8.9 ft), the orbital module, contained guidance and on-board propulsion systems. The experiment module, containing the scientific instrumentation, comprised the bottom 0.6 m (2.0 ft) of the cylinder. A 1.7 m (5.6 ft) parabolic high gain antenna was used for communication, along with an omnidirectional antenna and a semi-directional antenna. Power was supplied by two solar panel wings with a total area of 2.6 m2 (28 sq ft) affixed to opposite sides of the spacecraft. Power was stored in a 42 ampere-hour cadmium-nickel battery.[2]

Communications were via a decimeter wavelength radio transmitter mounted in the orbital module which used the high-gain antenna. This was supplemented by a metre wavelength range transmitter through the omnidirectional antenna. An 8 centimetre wavelength transmitter mounted in the experiment module was designed to transmit the TV images.[1][2] Also mounted in the experiment module was a 5-centimeter range impulse transmitter. Temperature control was achieved using a binary gas–liquid system and hemispherical radiators mounted on the ends of the solar panels. The craft carried various scientific instruments including a magnetometer probe, television photographic equipment, a spectroreflexometer, radiation sensors (gas-discharge and scintillation counters), a spectrograph to study ozone absorption bands, and a micrometeoroid instrument.[1][2]

This spacecraft is also referenced as Sputnik 23 and Mars 2MV-4. It was originally designated Sputnik 30 in the U.S. Naval Space Command Satellite Situation Summary.