Mars Colonial Transporter (MCT) is the name of the privately funded development project by U.S. company SpaceX to design and build a spaceflight system[2] of reusable rocket engines, launch vehicles and space capsules to transport humans to Mars and return to Earth.

SpaceX began development of the large Raptor rocket engine for the Mars Colonial Transporter before 2014, but the MCT will not be operational earlier than the mid-2020s.[3][4][full citation needed][5]

Since 2007, Elon Musk has stated his personal goal of eventually enabling human exploration and settlement of Mars.[6][7] He stated in a 2011 interview that he hoped to send humans to Mars' surface within 10–20 years.[7] In late 2012 Musk stated that he envisions a Mars colony of tens of thousand with the first colonists arriving no earlier than the middle of the 2020s.[8][9][10]

In October 2012, Musk stated plans to build a second reusable rocket system with capabilities substantially beyond the Falcon 9/Falcon Heavy launch vehicles on which SpaceX had by then spent several billion US dollars.[11] This new vehicle will be "an evolution of SpaceX's Falcon 9 booster ... much bigger [than Falcon 9]." But Musk indicated that SpaceX would not be speaking publicly about it until 2013.[12][8] In June 2013, Musk stated that he intends to hold off any potential IPO of SpaceX shares on the stock market until after the "Mars Colonial Transporter is flying regularly."[13][14]

In February 2014, Musk stated that Mars Colonial Transporter will be "100 times the size of an SUV", and capable of taking 100 people at a time to Mars.[15] Also, SpaceX engine development head Tom Mueller said SpaceX would use nine Raptor engines on a single rocket, similar to the use of nine Merlin engines on each Falcon 9 booster core. He said "It's going to put over 100 tons of cargo on Mars."[15] In early 2014, it appeared that the large rocket core that would be used for the booster to be used with MCT would be at least 10 meters (33 ft) in diameter, nearly three times the diameter and over seven times the cross-sectional area of the Falcon 9 booster cores.[2]

In August 2014, media sources speculated that the initial flight test of the Raptor-driven super-heavy launch vehicle could occur as early as 2020, in order to fully test the engines under orbital spaceflight conditions; however, any colonization effort would be "deep into the future".[16][17]

In January 2015, Musk said that he hoped to release details of the "completely new architecture" for the Mars transport system in late 2015 but those plans changed and, by December 2015, the plan to publicly release additional specifics had moved to 2016.[18] In January 2016, Musk indicated that he hoped to describe the architecture for the Mars missions with the next generation SpaceX rocket and spacecraft later in 2016, at the International Astronautical Congress conference,[5] which is scheduled for September 2016.[19][20]

Mars Colonial Transporter has been notionally described as a large interplanetary spacecraft capable of taking 100 people at a time to Mars,[15] although early flights are expected to carry fewer people and more equipment.[8] It may use a large water store to help shield occupants from space radiation and have a cabin oxygen content that is up to two times that which is found in Earth's atmosphere.[8]

The Mars colony envisioned by Musk would start small, with an initial group of fewer than ten people. With time, Musk sees that such an outpost could grow into something much larger and become self-sustaining, at least 1 million people. According to Musk, "even at a million people you’re assuming an incredible amount of productivity per person, because you would need to recreate the entire industrial base on Mars. You would need to mine and refine all of these different materials, in a much more difficult environment than Earth. There would be no trees growing. There would be no oxygen or nitrogen that are just there. No oil. ‘Excluding organic growth, if you could take 100 people at a time, you would need 10,000 trips to get to a million people,’ he said. ‘But you would also need a lot of cargo to support those people. In fact, your cargo to person ratio is going to be quite high. It would probably be 10 cargo trips for every human trip, so more like 100,000 trips. And we’re talking 100,000 trips of a giant spaceship.’"[21]

Musk has stated that an aspirational price goal for such a trip might be on the order of US$500,000, something that "most people in advanced countries, in their mid-forties or something like that, could put together [to make the trip]."[8]

Before any people are transported to Mars, a number of cargo missions would be undertaken first in order to transport the requisite equipment, habitats and supplies.[22] Equipment that would accompany the early groups would include "machines to produce fertilizer, methane and oxygen from Mars' atmospheric nitrogen and carbon dioxide and the planet's subsurface water ice" as well as construction materials to build transparent domes for crop growth.[8]

According to Elon Musk, the MCT would effectively become the first human habitat on Mars.[23] 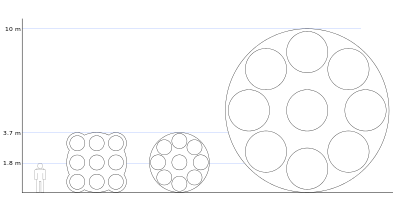 The super-heavy lift launch vehicle[24] for MCT will lift the 100 tonnes (220,000 lb)+ payload of the MCT into orbit and is intended to be fully-reusable.[17][25] The rocket has not yet been named by SpaceX.[26] The MCT launch vehicle will be powered by the Raptor bipropellant liquid rocket engine.[24] Details on the overall architecture of the launch vehicle however remain proprietary, while what little information has been made public has varied over time.

Early plans for the MCT launch vehicle, made public in April 2014, consisted of one or three cores with a 10-meter (33 ft) diameter which is comparable to the Saturn V. At the time, the rocket was slated to use nine Raptor LOX/methane engines to power each core.[15][2] The possibility of eliminating any tri-core version design, and modifying the MCT launch vehicle design to a single-core but larger-diameter vehicle—12.5 to 15 meters (41 to 49 ft) core diameter—was raised in late 2014[17] and further confirmed by Musk in early 2015.[25]

There may be more than one design in a family of SpaceX super-heavy lift launch vehicles.[17]

Competition for the American heavy-lift market

In August 2014, media sources noted that the US launch market may have two competitive launch vehicles available in the 2020s to launch payloads of 100 metric tons (220,000 lb) or more to low Earth orbit. The US government is currently developing the Space Launch System, a heavy-lift launch vehicle for lifting very large payloads of 70 to 130 tonnes (150,000 to 290,000 lb) to low Earth orbit. While SpaceX has played down the competitive aspect with SLS, if SpaceX makes progress on its super-heavy launch vehicle in "the coming years, it is almost unavoidable that America's two HLVs will attract comparisons and a healthy debate, potentially at the political level."[17][28]

As of March 2014[update], no launch site had been selected for the super-heavy lift rocket and Mars Colonial Transporter, but SpaceX did indicate that their leased facility in Florida at Launch Pad 39A would not be large enough to accommodate the vehicle, and that a new site would be built in order to launch the >10-meter diameter rocket.[26]

In September 2014, Elon Musk indicated that the first person to go to another planet could possibly launch from the SpaceX South Texas Launch Site,[29] but did not indicate what launch vehicle might be used to carry humans to orbit.