The Mars Scout Program was a NASA initiative to send a series of small, low-cost robotic missions to Mars, competitively selected from innovative proposals by the scientific community. The program had an array of missions destined to reach Mars, and study it at relatively low costs. Each Scout project was to cost less than US$485 million. The Phoenix[1] lander and MAVEN orbiter were selected and developed before the program was retired in 2010.[2] 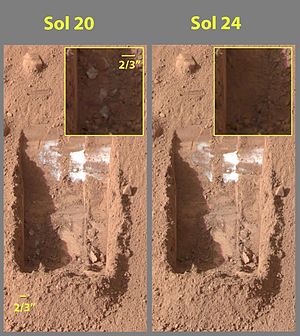 Phoenix dug these troughs on Mars, from which it is believed Ice evaporated from as shown in this comparison

The first robotic spacecraft in this program was Phoenix, a lander originally intended for the canceled Mars Surveyor mission but adapted to the new mission. Phoenix was launched on August 4, 2007, and landed on the icy northern polar region of the planet on May 25, 2008. Phoenix was designed to search for environments suitable for microbial life on Mars, and to research the history of water there. The 90 day primary mission was successful and the overall mission was concluded on November 10, 2008, after engineers were unable to contact the craft. The lander last made a brief communication with Earth on November 2, 2008.

Phoenix was one of four finalists selected out of 25 proposals.[3] The four finalists were Phoenix, MARVEL, SCIM (Sample Collection for Investigation of Mars), and ARES.[3] SCIM was a sample return mission utilizing a free-return trajectory and aerogel to capture Mars dust and return it to Earth[3] (see also: the Stardust mission). MARVEL was an orbiter that would search for volcanism as well as analyze various components of the Mars atmosphere.[3] The name is an acronym for Mars Volcanic Emission and Life Scout, and it was intended to detect gases from life if it was there.[3] ARES was an aircraft concept for Mars to study the lower atmosphere and surface.[3]

The Phoenix lander basic design was further utilized for the Discovery' program InSight for Mars.

Multiple lines of evidence suggest that Mars lost most of its atmosphere billions of years ago. The MAVEN orbiter is studying the current rate of atmospheric loss with an emphasis on the role of the solar wind, whose rapidly moving ions and magnetic field may be responsible for Mars' current condition.

Here are some previous missions that may have been considered for the Mars Scout Program:[9][10]