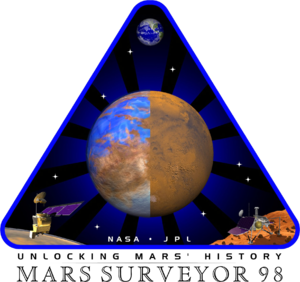 Both spacecraft were launched during the 1998 Mars orbit insertion launch window. Both were lost, including the penetrator probes.[citation needed]

Loss of the orbiter

The orbiter was lost due to a miscalculation in trajectory caused by an unintended and undetected mismatch between metric and English units of measurement.[1] The use of metric units as well as the data formats to employ were specified in a navigation software interface specification (SIS) published by JPL in 1996. Despite this, the flight operations team at Lockheed Martin provided impulse data in English units of pound-force seconds rather than newton seconds. These values were incorrect by a factor of 4.45 (1 lbf = 4.45 N). This caused erroneous course corrections that caused the orbiter to descend too low in Mars's atmosphere. The vehicle either burned up or bounced off into space.[citation needed]

Loss of the lander

Investigators concluded that the most likely cause of the lander's failure was a spurious sensor signal associated with the craft's legs falsely indicating the craft had touched down when in fact it was some 40 meters above the surface.[citation needed] When the landing legs unfolded they made a bouncing motion that accidentally set off the landing sensors, causing the descent engines to shut down prematurely and the lander to fall. Another possible reason for failure was inadequate preheating of catalysis beds for the pulsing rocket thrusters.[citation needed] Hydrazine fuel decomposes on the beds to make hot gases that are forced out of the rocket nozzles, generating thrust; in crash review tests cold catalysis beds caused misfiring and instability. 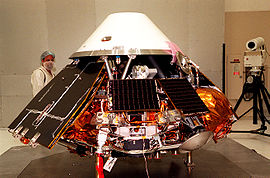 The Polar Lander under construction in the NASA lab

The Mars Surveyor 1998 program spacecraft development cost US$193.1 million. Launch costs for the Mars surveyor 98’ program was estimated at US $91.7 million and mission operations at US $42.8 million.[2] The Mars Climate Orbiter was part of NASA's 10-year Mars Surveyor Program,[citation needed] with launches every 26 months when the Earth and Mars are favorably positioned.