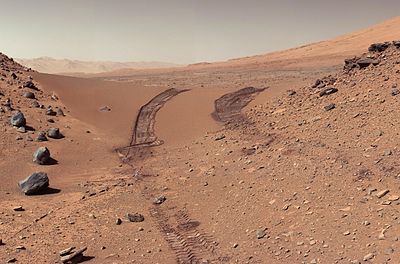 Martian soil is the fine regolith found on the surface of Mars. Its properties can differ significantly from those of terrestrial soil. The term Martian soil typically refers to the finer fraction of regolith. On Earth, the term "soil" usually includes organic content.[1] In contrast, planetary scientists adopt a functional definition of soil to distinguish it from rocks.[2] Rocks generally refer to 10 cm scale and larger materials (e.g., fragments, breccia, and exposed outcrops) with high thermal inertia, with areal fractions consistent with the Viking Infrared Thermal Mapper (IRTM) data, and immobile under current eolian conditions.[2] Consequently, rocks classify as grains exceeding the size of cobbles on the Wentworth scale.

This approach enables agreement across Martian remote sensing methods that span the electromagnetic spectrum from gamma to radio waves. ‘‘Soil’’ refers to all other, typically unconsolidated, material including those sufficiently fine-grained to be mobilized by wind.[2] Soil consequently encompasses a variety of regolith components identified at landing sites. Typical examples include: bedform armor, clasts, concretions, drift, dust, rocky fragments, and sand. The functional definition reinforces a recently proposed genetic definition of soil on terrestrial bodies (including asteroids and satellites) as an unconsolidated and chemically weathered surficial layer of fine-grained mineral or organic material exceeding centimeter scale thickness, with or without coarse elements and cemented portions.[1]

Martian dust generally connotes even finer materials than Martian soil, the fraction which is less than 30 micrometres in diameter. Disagreement over the significance of soil's definition arises due to the lack of an integrated concept of soil in the literature. The pragmatic definition "medium for plant growth" has been commonly adopted in the planetary science community but a more complex definition describes soil as "(bio)geochemically/physically altered material at the surface of a planetary body that encompasses surficial extraterrestrial telluric deposits." This definition emphasizes that soil is a body that retains information about its environmental history and that does not need the presence of life to form. 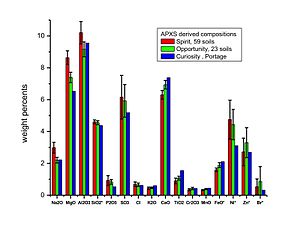 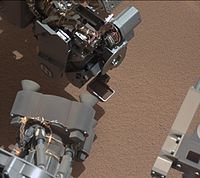 First use of the Curiosity rover scooper as it sifts a load of sand at "Rocknest" (October 7, 2012).

Mars is covered with vast expanses of sand and dust and its surface is littered with rocks and boulders. The dust is occasionally picked up in vast planet-wide dust storms. Mars dust is very fine and enough remains suspended in the atmosphere to give the sky a reddish hue. The reddish hue is due to rusting iron minerals presumably formed a few billion years ago when Mars was warm and wet, but now that Mars is cold and dry, modern rusting may be due to a superoxide that forms on minerals exposed to ultraviolet rays in sunlight.[5] The sand is believed to move only slowly in the Martian winds due to the very low density of the atmosphere in the present epoch. In the past, liquid water flowing in gullies and river vallies may have shaped the Martian regolith. Mars researchers are studying whether groundwater sapping is shaping the Martian regolith in the present epoch, and whether carbon dioxide hydrates exist on Mars and play a role. 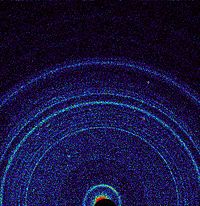 It is believed that large quantities of water and carbon dioxide[citation needed] ices remain frozen within the regolith in the equatorial parts of Mars and on its surface at higher latitudes. Water contents of Martian regolith range from <2% by weight to more than 60%.[7][8] The presence of olivine, which is an easily weatherable primary mineral, has been interpreted to mean that physical rather than chemical weathering processes currently dominate on Mars.[9] High concentrations of ice in soils are thought to be the cause of accelerated soil creep, which forms the rounded "softened terrain" characteristic of the Martian midlatitudes.

In June, 2008, the Phoenix Lander returned data showing Martian soil to be slightly alkaline and containing vital nutrients such as magnesium, sodium, potassium and chloride, all of which are necessary for living organisms to grow. Scientists compared the soil near Mars' north pole to that of backyard gardens on Earth, and concluded that it could be suitable for growth of plants.[10] However, in August, 2008, the Phoenix Lander conducted simple chemistry experiments, mixing water from Earth with Martian soil in an attempt to test its pH, and discovered traces of the salt perchlorate, while also confirming many scientists' theories that the Martian surface was considerably basic, measuring at 8.3. The presence of the perchlorate, if confirmed, would make Martian soil more exotic than previously believed.[11] Further testing is necessary to eliminate the possibility of the perchlorate readings being caused by terrestrial sources, which may have migrated from the spacecraft either into samples or the instrumentation.[12]

While our understanding of Martian soils is extremely rudimentary, their diversity may raise the question of how we might compare them with our Earth-based soils. Applying an Earth-based system is largely debatable but a simple option is to distinguish the (largely) biotic Earth from the abiotic Solar System, and include all non-Earth soils in a new World Reference Base for Soil Resources Reference Group or USDA soil taxonomy Order, which might be tentatively called Astrosols.[13]

On October 17, 2012 (Curiosity rover at "Rocknest"), the first X-ray diffraction analysis of Martian soil was performed. The results revealed the presence of several minerals, including feldspar, pyroxenes and olivine, and suggested that the Martian soil in the sample was similar to the "weathered basaltic soils" of Hawaiian volcanoes.[6] Hawaiian volcanic ash has been used as Martian regolith simulant by researchers since 1998.[14]

In December 2012, scientists working on the Mars Science Laboratory mission announced that an extensive soil analysis of Martian soil performed by the Curiosity rover showed evidence of water molecules, sulphur and chlorine, as well as hints of organic compounds.[3][4][15] However, terrestrial contamination, as the source of the organic compounds, could not be ruled out.

On September 26, 2013, NASA scientists reported the Mars Curiosity rover detected "abundant, easily accessible" water (1.5 to 3 weight percent) in soil samples at the Rocknest region of Aeolis Palus in Gale Crater.[16][17][18][19][20][21] In addition, NASA reported that the Curiosity rover found two principal soil types: a fine-grained mafic type and a locally derived, coarse-grained felsic type.[18][20][22] The mafic type, similar to other martian soils and martian dust, was associated with hydration of the amorphous phases of the soil.[22] Also, perchlorates, the presence of which may make detection of life-related organic molecules difficult, were found at the Curiosity rover landing site (and earlier at the more polar site of the Phoenix lander) suggesting a "global distribution of these salts".[21] NASA also reported that Jake M rock, a rock encountered by Curiosity on the way to Glenelg, was a mugearite and very similar to terrestrial mugearite rocks.[23]

Dust devils cause twisting dark trails on the Martian surface.

Similarly sized dust will settle from the thinner Martian atmosphere sooner than it would on Earth. For example, the dust suspended by the 2001 global dust storms on Mars only remained in the Martian atmosphere for 0.6 years, while the dust from Mt. Pinatubo took about 2 years to settle.[24] However, under current Martian conditions, the mass movements involved are generally much smaller than on Earth. Even the 2001 global dust storms on Mars moved only the equivalent of a very thin dust layer – about 3 µm thick if deposited with uniform thickness between 58° north and south of the equator.[24] Dust deposition at the two rover sites has proceeded at a rate of about the thickness of a grain every 100 sols.[25]

November 25, 2012
Locations of Opportunity and Curiosity rovers are noted (MRO).

Regolith beneath the Phoenix Mars Lander, where thrusters may have cleared away the soil to expose underlying ice.

The difference in the concentration of dust in Earth's atmosphere and that of Mars stems from a key factor. On Earth, dust that leaves atmospheric suspension usually gets aggregated into larger particles through the action of soil moisture or gets suspended in oceanic waters. It helps that most of earth's surface is covered by liquid water. Neither process occurs on Mars, leaving deposited dust available for suspension back into the Martian atmosphere.[26] In fact, the composition of Martian atmospheric dust – very similar to surface dust – as observed by the Mars Global Surveyor Thermal Emission Spectrometer, may be volumetrically dominated by composites of plagioclase feldspar and zeolite[27] which can be mechanically derived from Martian basaltic rocks without chemical alteration. Observations of the Mars Exploration Rovers’ magnetic dust traps suggest that about 45% of the elemental iron in atmospheric dust is maximally (3+) oxidized and that nearly half exists in titanomagnetite,[28] both consistent with mechanical derivation of dust with aqueous alteration limited to just thin films of water.[29] Collectively, these observations support the absence of water-driven dust aggregation processes on Mars. Furthermore, wind activity dominates the surface of Mars at present, and the abundant dune fields of Mars can easily yield particles into atmospheric suspension through effects such as larger grains disaggregating fine particles through collisions.[30]