Martinsburg is a city in and the county seat of Berkeley County, West Virginia, United States,[5] in the state's Eastern Panhandle region. Its population was 17,227 at the 2010 census making it the largest city in the Eastern Panhandle and the ninth largest municipality in the state. Martinsburg is one of the core cities in the Hagerstown-Martinsburg, MD-WV Metropolitan Statistical Area.

Martinsburg was a white settlement founded on the upper Potomac River in 1778 during the American Revolutionary War by General Adam Stephen. He named it in honor of Colonel Thomas Bryan Martin, a nephew of Thomas Fairfax, 6th Lord Fairfax of Cameron.[6]

Aspen Hall is a Georgian mansion, the oldest house in the city. Part was built in 1745 by Edward Beeson, Sr. Aspen Hall and its wealthy residents had key roles in the agricultural, religious, transportation, and political history of the region. Significant events related to the French and Indian War; the Revolution, and the Civil War took place on the property. Three original buildings are still standing, including the rare blockhouse of Mendenhall's Fort.

The first United States post office in what is now West Virginia was established at Martinsburg in 1792. At that time, Martinsburg and the larger territory were still part of Virginia.

The Baltimore and Ohio Railroad (B&O) reached Martinsburg in 1842. The B&O Roundhouse and Station Complex was first constructed in 1849.

According to William Still, "The Father of the Underground Railroad" and its historian, Robert Brown, alias Thomas Jones, escaped from slavery in Martinsburg on Christmas night, 1856. He rode a horse and had it swim across the freezing Potomac River. After riding forty miles, he walked in cold wet clothes for two days, to Harrisburg, Pennsylvania. He received assistance there from the Underground Railroad and traveled by train to Philadelphia, and the office of William Still with the Pennsylvania Anti-Slavery Society. Brown's wife and four children had been sold; he sought help to find them. He had a likeness of his wife, and locks of hair from each of them.[citation needed]

In 1854, ten-year-old Isabelle Boyd, known as "Belle" and later a noted spy for the Confederacy, moved to Martinsburg with her family; where her father Benjamin operated a general merchandise store. After the Civil War began, Benjamin joined Second Virginia Infantry, which was part of the Stonewall Brigade. His wife Mary was thus in charge of the Boyd home when Union forces under General Robert Patterson took Martinsburg. When a group of Patterson's men tried to raise a Union flag over the Boyd home, Mary refused. One of the soldiers, Frederick Martin, threatened Mary, and Belle shot him. She was acquitted.

She soon became involved in espionage, sending information to Confederate generals Thomas "Stonewall" Jackson and J.E.B. "Jeb" Stuart. Often she was helped by Eliza Corsey, a Boyd family slave whom Belle had taught to read and write. In 1863, Belle was arrested in Martinsburg by the Union Army and imprisoned. Boyd's Greek Revival home, which he had built in 1853 and sold in 1855, had numerous owners over the decades. In 1992 it was purchased by the Berkeley County Historical Society. The historical society renovated the building and now operates it as the Berkeley County Museum. It is also known as the Belle Boyd House.

Most residents of West Virginia were yeomen farmers who supported the Union and, during the American Civil War, they voted to separate from Virginia. The new state was admitted to the Union during the war. The city of Martinsburg was incorporated by an act of the new West Virginia Legislature on March 30, 1868.

Martinsburg became a center of the railroad industry and its workers. The Great Railroad Strike of 1877 began July 14, 1877 in this city and spread nationwide.

Telephone service was established in Martinsburg in 1883. In 1889, electricity began to be furnished to Martinsburg as part of a franchise granted to the United Edison Manufacturing Company of New York.

The Interwoven mills began operations in Martinsburg in 1891; it grew to be the largest manufacturer of men's hosiery in the world.

Construction of the "Apollo Civic Theatre" was completed in 1913.

Over one thousand (1,039) men from Berkeley County participated in World War I. Of these, forty-one were killed and twenty-one were wounded in battle. A monument to those who fell in battle was erected in Martinsburg in 1925.

During World War II, the Newton D. Baker Hospital in Martinsburg treated thousands of soldiers wounded in the war. In 1946 this military hospital became a part of the Veterans Administration (VA). The VA Medical Center in Martinsburg still provides care to United States veterans.

Due to restructuring beginning in the late 1940s and through the 1950s, many of the mills and factories operating in Martinsburg shut down and went out of business, dealing a major blow to the local economy. Jobs were moved to the Deep South and later offshore.

Martinsburg is located at Lua error in Module:Coordinates at line 668: callParserFunction: function "#coordinates" was not found. (39.459207, −77.967814).[7] As per MapQuest, Martinsburg is approximately 92 miles (148 km) driving distance northwest of Washington, D.C.. U.S. Route 11 runs through the center of town, and Interstate 81 passes along the northern side of the town.

There were 7,293 households of which 29.6% had children under the age of 18 living with them, 35.3% were married couples living together, 15.0% had a female householder with no husband present, 6.0% had a male householder with no wife present, and 43.7% were non-families. 35.4% of all households were made up of individuals and 12.6% had someone living alone who was 65 years of age or older. The average household size was 2.32 and the average family size was 3.00.

There were 6,684 households out of which 24.9% had children under the age of 18 living with them, 36.7% were married couples living together, 13.7% had a female householder with no husband present, and 44.8% were non-families. 37.6% of all households were made up of individuals and 15.2% had someone living alone who was 65 years of age or older. The average household size was 2.21 and the average family size was 2.92.

Major private employers in and around Martinsburg include Quad/Graphics, Ecolab, Orgill, Macy's, and FedEx. In February 2015, it was announced that Procter & Gamble plans to build a $500 million facility near the city.[12]

The area is also home to the 167th Airlift Wing of the West Virginia Air National Guard, based in Eastern WV Regional Airport.

Martinsburg had its own automobile company from 1912 to 1922, called Norwalk. The cars that were assembled there are the longest-made known cars to be built in the state of West Virginia.[13] 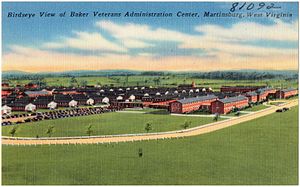 Martinsburg has one Shopping Mall

Other retail centers/areas in Martinsburg include: 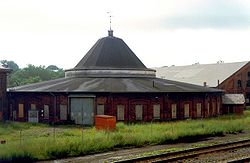