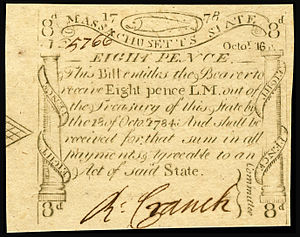 An eight pence note in Massachusetts state currency, issued in 1778. These "codfish" bills, so-called because of the cod in the border design, were engraved and printed by Paul Revere.[1]

The paper money issued in colonial Massachusetts was denominated in pounds, shillings, and pence. Initially, six shillings were equal to one Spanish dollar. After years of high inflation, in 1749 Massachusetts withdrew its paper money from circulation and returned to specie.

Massachusetts once again began issuing paper money after the American Revolutionary War began in 1775. The state currency depreciated greatly and was replaced by the U.S. dollar in 1793.

The coins nearly all bore the date "1652". This was the date of the local legislation sanctioning the production of coins. The date was maintained by the Massachusetts moneyers in order to appear to be complying with English law that reserved the right of produce coins to the crown, since, in 1652, England was a Commonwealth (King Charles I having been beheaded three years previously). The coins were struck by John Hull and Robert Sanderson, two Massachusetts settlers. The image of the pine tree on the later coins may symbolize an important export for Massachusetts - pine trees for ships' masts.[6] The mint was closed by the government in 1682.

From 1690, paper money was issued, denominated in pounds, shillings and pence. The notes were printed from engraved copper plates (probably the work of silversmith Jeremiah Dummer).[7]