Massoud Nawabi (1954–2010; Persian: مسعود نوابی-; alternative spellings: Masood Nawabi) also known as Ustad Nawabi, was an Afghan poet, writer, Director as well as a cultural personality, founder of Educational Committee for Afghan Refugees (ECAR), Afghan Cultural Center, Ghulam Habib Nawabi, Chief Administrator of the Afghan Ibn-e-Sina University and Principle of Ariana Mahajir High School. Massoud Nawabi was the Son of Ghulam Habib Nawabi, who was the last of the great Persian Poet and among the first to introduce modern Dari poetry to Afghanistan.[1]

Massoud Nawabi Born to an Intellectual and Educated family in Kabul Afghanistan. He was well known for his literary criticism and his cultural works. He had hundreds of students, many are now themselves poets and writers. He wrote many topics, contents and published magazines like Beenish (بينش), Pohyesh (پويش) and Dewah (ديوه) on literary criticism in Persian Dari. He also initiated and edited several literary journals.

Nawabi was one of the initial script writers and feature writers for some Afghan based drama serials and Afghan Films like Samarqand and Tabloye Khanavade. He left a record about thousands of articles for different magazines, newspapers, websites, Afghan films and dramas and for the Ministry of Information and Culture of Afghanistan.

Massoud Nawabi wrote more than 45 books. His most famous book called Keshtzar Zahfaran, published in 3000 copies by Al-Azhar prints and Publications in Peshawar. The book had a great market for the publication company and as of June 2010 it has been published for more than one million copies and marketed around Afghanistan, Iran and Pakistan. However late Nawabi never sold even one of his books for the Publication companies he always dedicated and gifted his books. besides he published and launched around 38 books of his father's, Ghulam Habib Nawabi.[2] 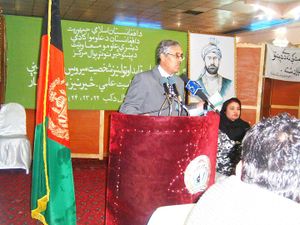 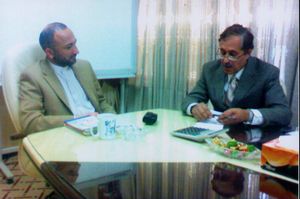 Massoud Nawabi died from a heart attack in PIMS Complex Hospital, Islamabad – Pakistan on 2 January 2010. His funeral was held on the afternoon of 3 January 2012 by many admirers, poets, writers, government officials and journalists at The 500 Family Graveyard, Kabul – Afghanistan.

Poets, writers and authors, teachers, high-ranked officials, diplomats from the Embassy of Afghanistan and students were gathered from different cities including Islamabad, Peshawar, Kabul and Herat to attend his first death anniversary. [7]