A mathematician is someone who uses an extensive knowledge of mathematics in their work, typically to solve mathematical problems. Mathematics is concerned with numbers, data, quantity, structure, space, models and change. 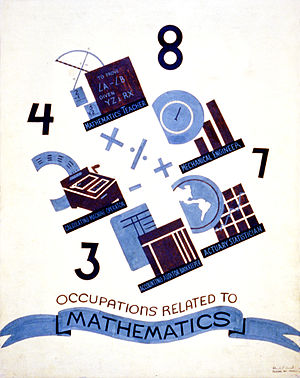 One of the earliest known mathematicians was Thales of Miletus (c. 624–c.546 BC); he has been hailed as the first true mathematician and the first known individual to whom a mathematical discovery has been attributed.[1] He is credited with the first use of deductive reasoning applied to geometry, by deriving four corollaries to Thales' Theorem.

The number of known mathematicians grew when Pythagoras of Samos (c. 582–c. 507 BC) established the Pythagorean School, whose doctrine it was that mathematics ruled the universe and whose motto was "All is number".[2] It was the Pythagoreans who coined the term "mathematics", and with whom the study of mathematics for its own sake begins.

The first woman mathematician recorded by history was Hypatia of Alexandria (AD 350 - 415). She succeeded her father as Librarian at the Great Library and wrote many works on applied mathematics. Because of a political dispute, the Christian community in Alexandria punished her, presuming she was involved, by stripping her naked and scraping off her skin with clamshells (some say roofing tiles).[3]

Science and mathematics in the Islamic world during the Middle Ages followed various models and modes of funding varied based primarily on scholars. It was extensive patronage and strong intellectual policies implemented by specific rulers that allowed scientific knowledge to develop in many areas. Funding for translation of scientific texts in other languages was ongoing throughout the reign of certain caliphs,[4] and it turned out that certain scholars became experts in the works they translated and in turn received further support for continuing to develop certain sciences. As these sciences received wider attention from the elite, more scholars were invited and funded to study particular sciences. An example of a translator and mathematician who benefited from this type of support was al-Khawarizmi. A notable feature of many scholars working under Muslim rule in medieval times is that they were often polymaths. Examples include the work on optics, maths and astronomy of Ibn al-Haytham.

The Renaissance brought an increased emphasis on mathematics and science to Europe. During this period of transition from a mainly feudal and ecclesiastical culture to a predominantly secular one, many notable mathematicians had other occupations: Luca Pacioli (founder of accounting); Niccolò Fontana Tartaglia (notable engineer and bookkeeper); Gerolamo Cardano (earliest founder of probability and binomial expansion); Robert Recorde (physician) and François Viète (lawyer).

As time passed, many mathematicians gravitated towards universities. An emphasis on free thinking and experimentation had begun in Britain's oldest universities beginning in the seventeenth century at Oxford with the scientists Robert Hooke and Robert Boyle, and at Cambridge where Isaac Newton was Lucasian Professor of Mathematics & Physics. Moving into the 19th century, the objective of universities all across Europe evolved from teaching the “regurgitation of knowledge” to “encourag[ing] productive thinking.”[5] In 1810, Humboldt convinced the King of Prussia to build a university in Berlin based on Friedrich Schleiermacher’s liberal ideas; the goal was to demonstrate the process of the discovery of knowledge and to teach students to “take account of fundamental laws of science in all their thinking.” Thus, seminars and laboratories started to evolve. [6]

British universities of this period adopted some approaches familiar to the Italian and German universities, but as they already enjoyed substantial freedoms and autonomy the changes there had begun with the Age of Enlightenment, the same influences that inspired Humboldt. The Universities of Oxford and Cambridge emphasized the importance of research, arguably more authentically implementing Humboldt’s idea of a university than even German universities, which were subject to state authority.[7] Overall, science (including mathematics) became the focus of universities in the 19th and 20th centuries. Students could conduct research in seminars or laboratories and began to produce doctoral theses with more scientific content.[8] According to Humboldt, the mission of the University of Berlin was to pursue scientific knowledge.[9] The German university system fostered professional, bureaucratically regulated scientific research performed in well-equipped laboratories, instead of the kind of research done by private and individual scholars in Great Britain and France.[10] In fact, Rüegg asserts that the German system is responsible for the development of the modern research university because it focused on the idea of “freedom of scientific research, teaching and study.”[11]

Mathematicians usually cover a breadth of topics within mathematics in their undergraduate education, and then proceed to specialize in topics of their own choice at the graduate-level. In some universities, a qualifying exam serves to test both the breadth and depth of a student's understanding of mathematics; the students, who pass, are permitted to work on a doctoral dissertation.

Pure mathematics is mathematics that studies entirely abstract concepts. From the eighteenth century onwards, this was a recognized category of mathematical activity, sometimes characterized as speculative mathematics,[12] and at variance with the trend towards meeting the needs of navigation, astronomy, physics, economics, engineering, and other applications.

Another insightful view put forth is that pure mathematics is not necessarily applied mathematics: it is possible to study abstract entities with respect to their intrinsic nature, and not be concerned with how they manifest in the real world.[13] Even though the pure and applied viewpoints are distinct philosophical positions, in practice there is much overlap in the activity of pure and applied mathematicians.

Many professional mathematicians also engage in the teaching of mathematics. Duties may include:

Many careers in mathematics outside of universities involve consulting. For instance, actuaries assemble and analyze data to estimate the probability and likely cost of the occurrence of an event such as death, sickness, injury, disability, or loss of property. Actuaries also address financial questions, including those involving the level of pension contributions required to produce a certain retirement income and the way in which a company should invest resources to maximize its return on investments in light of potential risk. Using their broad knowledge, actuaries help design and price insurance policies, pension plans, and other financial strategies in a manner which will help ensure that the plans are maintained on a sound financial basis.

As another example, mathematical finance will derive and extend the mathematical or numerical models without necessarily establishing a link to financial theory, taking observed market prices as input. Mathematical consistency is required, not compatibility with economic theory. Thus, for example, while a financial economist might study the structural reasons why a company may have a certain share price, a financial mathematician may take the share price as a given, and attempt to use stochastic calculus to obtain the corresponding value of derivatives of the stock (see: Valuation of options; Financial modeling).

According to the Dictionary of Occupational Titles occupations in mathematics include the following.[14]

A mathematician is a device for turning coffee into theorems.

—Attributed to both Alfréd Rényi[15] and Paul Erdős

Die Mathematiker sind eine Art Franzosen; redet man mit ihnen, so übersetzen sie es in ihre Sprache, und dann ist es alsobald ganz etwas anderes. (Mathematicians are [like] a sort of Frenchmen; if you talk to them, they translate it into their own language, and then it is immediately something quite different.)

Each generation has its few great mathematicians...and [the others'] research harms no one.

In short, I never yet encountered the mere mathematician who could be trusted out of equal roots, or one who did not clandestinely hold it as a point of his faith that x squared + px was absolutely and unconditionally equal to q. Say to one of these gentlemen, by way of experiment, if you please, that you believe occasions may occur where x squared + px is not altogether equal to q, and, having made him understand what you mean, get out of his reach as speedily as convenient, for, beyond doubt, he will endeavor to knock you down.

A mathematician, like a painter or poet, is a maker of patterns. If his patterns are more permanent than theirs, it is because they are made with ideas.

Some of you may have met mathematicians and wondered how they got that way.

It is impossible to be a mathematician without being a poet in soul.