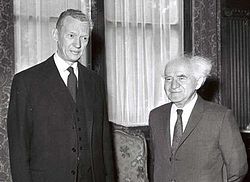 He was born Maurice Couve (his father acquired the name de Murville in 1925[3]) in Reims and died in Paris at the age of 92 from natural causes.

Couve de Murville joined the corps of finance inspectors in 1930, and in 1940 became Director of External Finances of the Vichy régime, in which capacity he sat at the armistice council of Wiesbaden. In March 1943, after the American landing in North Africa, he was one of the few senior officials of Vichy to join the Free French. He left for Algiers, via Spain, where he joined General Henri Giraud. On 7 June 1943, he was named commissioner of finance of the French Committee of National Liberation (CFLN). A few months later, he joined General Charles de Gaulle. In February 1945, he became a member of the Provisional Government of the French Republic (GPRF) with the rank of ambassador attached to the Italian government.

After the war, he occupied several posts as French Ambassador, in Cairo (1950 to 1954), at NATO (1954), in Washington (1955 to 1956) and in Bonn (1956 to 1958). When General de Gaulle returned to power in 1958, he became Foreign Minister, a post he retained for ten years until the reshuffle that followed the events of May 1968 where he replaced Finance minister Michel Debré, keeping this post only a short time: very soon after the elections, he became a transitional Prime Minister, replacing Georges Pompidou. The following year he was succeeded by Jacques Chaban-Delmas.

Couve de Murville continued his political career first as a UDR deputy, then RPR deputy for Paris until 1986, then as a senator until 1995.

Minister of Economy and Finance : May–July 1968