From Infogalactic: the planetary knowledge core
Jump to: navigation, search
Not to be confused with his uncle, Max Delbrück (1850-1919), an agricultural chemist.

Max Ludwig Henning Delbrück, ForMemRS[3] (September 4, 1906 – March 9, 1981), a German–American biophysicist, helped launch the molecular biology research program in the late 1930s. He stimulated physical scientists' interest into biology, especially as to basic research to physically explain genes, mysterious at the time. Formed in 1945 and led by Delbrück along with Salvador Luria and Alfred Hershey, the Phage Group made substantial headway unraveling important aspects of cell physiology. The three shared the 1969 Nobel Prize in Physiology or Medicine "for their discoveries concerning the replication mechanism and the genetic structure of viruses".[4]

He was the first physicist to predict what is now called Delbrück scattering.

Delbrück was born in Berlin, German Empire. His mother was granddaughter of Justus von Liebig, eminent chemist, while his father Hans Delbrück was a history professor at the University of Berlin. In 1937, Max left Nazi Germany for America—first California, then Tennessee—becoming a US citizen in 1945.[1] In 1941, he married Mary Bruce. They had four children.

Delbrück's brother Justus, a lawyer, as well as his sister Emmi Bonhoeffer were active along with his brothers-in-law Klaus Bonhoeffer and Dietrich Bonhoeffer in resistance to Nazism. Found guilty by the People's Court for roles in the July 20, 1944 plot to assassinate Hitler, the three men were executed in 1945 by the RSHA.

Delbrück studied astrophysics, shifting towards theoretical physics, at the University of Göttingen. Having earned a Ph.D. in 1930, he traveled through England, Denmark, and Switzerland. He met Wolfgang Pauli and Niels Bohr, who interested him in biology.

Delbrück returned to Berlin in 1932 as an assistant to Lise Meitner, who was collaborating with Otto Hahn on irradiation of uranium with neutrons. Delbrück wrote a few papers, including one in 1933 on gamma rays' scattering by a Coulomb field's polarization of a vacuum. Though theoretically tenable, his conclusion was misplaced, whereas Hans Bethe some 20 years later confirmed the phenomenon and named it "Delbrück scattering".[5]

In 1937, he attained a fellowship from Rockefeller Foundation—which was launching the molecular biology research program—to research genetics of the fruit fly, Drosophila melanogaster, in California Institute of Technology's biology department,[6] where Delbrück could blend interests in biochemistry and genetics.[7] While at Caltech, Delbrück researched bacteria and their viruses (bacteriophages or phages). In 1939, with E.L. Ellis, he coauthored "The growth of bacteriophage", a paper reporting that the viruses reproduce in one step, not exponentially as do cellular organisms. 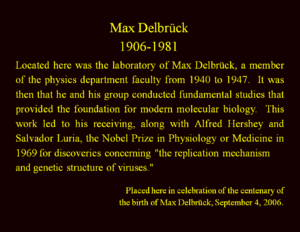 Drawing of a plaque in Buttrick Hall, Vanderbilt University commemorating the work of Max Delbrück.[8]

Although Delbrück's Rockefeller Foundation fellowship expired in 1939, the Foundation matched him up with Vanderbilt University in Nashville, Tennessee, where from 1940 to 1947 he taught physics, yet had his laboratory in the biology department.[9] In 1941, Delbrück met Salvador Luria of Indiana University who began visiting Vanderbilt.[9] In 1942, Delbrück and Luria published on bacterial resistance to virus infection mediated by random mutation.[9] Alfred Hershey of Washington University began visiting in 1943.[9]

In 1945, Delbrück, Luria, and Hershey set up a course in bacteriophage genetics at Cold Spring Harbor Laboratory in Long Island, New York.[9] This Phage Group spurred molecular biology's early development.[10] Delbrück received the 1969 Nobel Prize in Physiology or Medicine, shared with Luria and Hershey.[4][9][11] Also that year, Delbrück and Luria were awarded by Columbia University the Louisa Gross Horwitz Prize. In late 1947, as Vanderbilt lacked the resources to keep him, Delbrück had returned to Caltech as a professor of biology, and remained there for the rest of his career.[9] Meanwhile, he set up University of Cologne's institute for molecular genetics.

In addition to the Nobel Prize, Delbrück was elected a Foreign Member of the Royal Society (ForMemRS) in 1967.[3] The Max Delbruck Prize, formerly known as the biological physics prize, awarded by the American Physical Society is named in his honour

Delbrück helped spur physical scientists' interest in biology. His inferences on genes' susceptibility to mutation was relied on by physicist Erwin Schrödinger in his 1944 book What Is Life?,[12] which conjectured genes were an "aperiodic crystal" storing codescript and influenced Francis Crick and James D. Watson in their 1953 identification of cellular DNA's molecular structure as a double helix.[13][14] Delbrück invented the game hinkle-finney-duster.[11][15][16] In 1977, he retired from Caltech, remaining a Professor of Biology emeritus.

Max Delbrück died, at age 74, on the evening of Monday, March 9, 1981, at Huntington Memorial Hospital in Pasadena, California. On August 26 to 27, 2006—the year Delbrück would have turned 100—family and friends gathered at Cold Spring Harbor Laboratory to reminisce on his life and work.[17] Although Delbrück supported research reductionism, he conjectured that ultimately a paradox—akin perhaps to the waveparticle duality of physics—would be revealed about life.[18]