Medgar Wiley Evers (July 2, 1925 – June 12, 1963) was an American civil rights activist from Mississippi who worked to overturn segregation at the University of Mississippi and gain social justice and voting rights. A World War II veteran and college graduate, he became active in the Civil Rights Movement in the 1950s. He became a field secretary for the NAACP. Following the 1954 ruling of the United States Supreme Court in Brown v. Board of Education that segregated public schools were unconstitutional, Evers worked to gain admission for African Americans to the state-supported public University of Mississippi. He also worked on voting rights and registration, economic opportunity, access to public facilities, and other changes in the segregated society.

Evers was assassinated by Byron De La Beckwith, a member of the White Citizens' Council, a group formed in 1954 to resist integration of schools and civil rights activity. As a veteran, Evers was buried with full military honors at Arlington National Cemetery.[2][3] His murder and the resulting trials inspired civil rights protests, as well as numerous works of art, music, and film. All-white juries failed to reach verdicts in the first two trials of Beckwith. He was convicted in a new state trial in 1994, based on new evidence.

Myrlie Evers, widow of the activist, became a noted activist in her own right, serving as national chair of the NAACP. His brother Charles Evers was the first African-American mayor elected in Mississippi in the post-Reconstruction era when he won in 1969 in Fayette.

Evers was born July 2, 1925, in Decatur, Mississippi, the third of the five children (including older brother Charlie Evers) of Jesse (Wright) and James Evers. The family included Jesse's two children from a previous marriage.[4][5] The Evers family owned a small farm, and James also worked at a sawmill.[6] Evers walked twelve miles to attend segregated schools, and earned his high school diploma.[7]

He served in the U.S. Army during World War II from 1943 to 1945. He was sent to the European Theater and he fought in the Battle of Normandy in June 1944. After the end of the war, Evers was honorably discharged as a sergeant.[8]

In 1948 Evers enrolled at Alcorn College (a historically black college, now Alcorn State University) majoring in business administration.[9] He also competed on the debate, football, and track teams, sang in the choir, and was junior class president.[10] He earned his Bachelor of Arts in 1952.[9]

The couple moved to Mound Bayou, Mississippi, a town developed by African Americans, where Evers became a salesman for T. R. M. Howard's Magnolia Mutual Life Insurance Company.[13] Howard was also president of the Regional Council of Negro Leadership (RCNL);[14] Evers helped organize the RCNL's boycott of gasoline stations that denied blacks the use of the stations' restrooms.[15] Evers and his brother Charles also attended the RCNL's annual conferences in Mound Bayou between 1952 and 1954, which drew crowds of ten thousand or more.[16]

In 1954 Evers applied to the segregated University of Mississippi Law School, but his application was rejected because of his race.[17] He submitted his application in concert with the NAACP as a test case.[18] That year the US Supreme Court had ruled that segregation of public schools (which included state universities) was unconstitutional.

In late 1954 Evers was named the NAACP's first field secretary for Mississippi.[6] In this position, he helped organize boycotts and set up new local chapters of the NAACP. He was involved with James Meredith's efforts to enroll in the University of Mississippi in the early 1960s.[18] Evers also helped Dr. Gilbert Mason, Sr., organize the Biloxi Wade-Ins, protests against segregation of public beaches on the Mississippi Gulf Coast.[19]

Evers’ civil rights leadership and investigative work made him a target of white supremacists. The White Citizens Council was founded in Mississippi, with numerous local chapters, to resist integration of schools and civil rights goals. In the weeks before Evers' death, the leader encountered new levels of hostility. His public investigations into the 1955 lynching of teenaged Emmett Till and his vocal support of Clyde Kennard had made him a prominent black leader. On May 28, 1963, a Molotov cocktail was thrown into the carport of his home.[20] On June 7, 1963, Evers was nearly run down by a car after he emerged from the NAACP office in Jackson.[13] 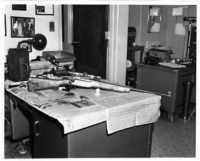 In the early morning of June 12, 1963, just hours after President John F. Kennedy's nationally televised Civil Rights Address, Evers pulled into his driveway after returning from a meeting with NAACP lawyers. Emerging from his car and carrying NAACP T-shirts that read "Jim Crow Must Go", Evers was struck in the back with a bullet fired from an Enfield 1917 rifle; the bullet ripped through his heart. He staggered 30 feet (9.1 meters) before collapsing. He was taken to the local hospital in Jackson, where he was initially refused entry because of his race. His family explained who he was and he was admitted; he died in the hospital 50 minutes later.[21][full citation needed]

After Evers was assassinated, an estimated 5,000 people marched from the Masonic Temple on Lynch Street to the Collins Funeral Home on North Farish Street in Jackson. Allen Johnson, Rev. Martin Luther King and other civil rights leaders led the procession.[22] 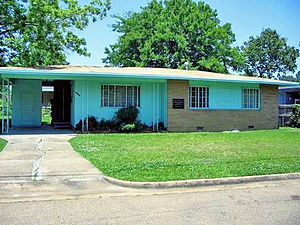 Medgar Evers's house at 2332 Margaret Walker Alexander Drive, where the activist was fatally shot after getting out of his car.[23]

Mourned nationally, Evers was buried on June 19 in Arlington National Cemetery, where he received full military honors before a crowd of more than 3,000.[14]

On June 21, 1963, Byron De La Beckwith, a fertilizer salesman and member of the White Citizens' Council (and later of the Ku Klux Klan), was arrested for Evers' murder.[24] District Attorney and future governor Bill Waller prosecuted De La Beckwith.[25] All-white juries twice that year deadlocked on De La Beckwith's guilt and failed to reach a verdict. At the time, most blacks were disenfranchised by Mississippi's constitution and voter registration practices; this meant they were also excluded from juries, which were based on registered voters.

In 1994, De La Beckwith was prosecuted by the state based on new evidence. Bobby DeLaughter was the prosecutor. During the trial, the body of Evers was exhumed from his grave for an autopsy.[3] De La Beckwith was convicted of murder on February 5, 1994, after having lived as a free man for much of the three decades following the killing. (He had been imprisoned from 1977 to 1980 on separate charges: conspiring to murder A. I. Botnick.) De La Beckwith appealed his conviction in the Evers' case, but died at age 80 in prison in January 2001. 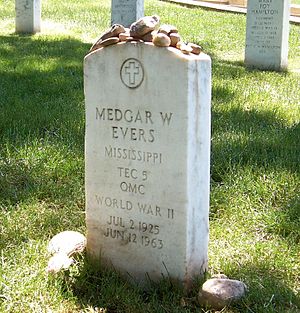 Evers was memorialized by leading Mississippi and national authors, both black and white: Eudora Welty, James Baldwin, Margaret Walker and Anne Moody.[26] In 1963, he was awarded the Spingarn Medal from the NAACP.[27] In 1969, Medgar Evers College was established in Brooklyn, New York, as part of the City University of New York.

Evers's widow, Myrlie Evers co-wrote the book For Us, the Living with William Peters in 1967. In 1983, a movie was made based on the book. Celebrating Evers's life and career, it starred Howard Rollins, Jr. and Irene Cara as Medgar and Myrlie Evers, airing on PBS. The film won the Writers Guild of America award for Best Adapted Drama.[28]

Statue of Evers at the Medgar Evers Boulevard Library in Jackson, Mississippi.

His widow Myrlie Evers became a noted activist in her own right, eventually serving as chair of the NAACP.[30] Medgar's brother Charles Evers returned to Jackson in July 1963 and served briefly with the NAACP in his slain brother's place. He remained involved in Mississippi civil rights activities for many years, was the first African-American mayor elected in the state in 1969, and resides in Jackson.[31]

On the 40-year anniversary of Evers' assassination, hundreds of civil rights veterans, government officials, and students from across the country gathered around his grave site at Arlington National Cemetery to celebrate his life and legacy. Barry Bradford and three students—Sharmistha Dev, Jajah Wu and Debra Siegel, formerly of Adlai E. Stevenson High School in Lincolnshire, Illinois—planned and hosted the commemoration in his honor.[32] Evers was the subject of the students' research project.[33]

In October 2009, Navy Secretary Ray Mabus, a former Mississippi governor, announced that USNS Medgar Evers (T-AKE-13), a Lewis and Clark-class dry cargo ship, would be named in the activist's honor.[34] The ship was christened by Myrlie Evers-Williams on November 12, 2011.[35]

In June 2013, a statue of Evers was erected at his alma mater, Alcorn State University, to commemorate the 50th anniversary of his death.[36] Alumni and guests from around the world gathered to recognize his contributions to American society.

Musician Bob Dylan wrote his 1963 song "Only a Pawn in Their Game" about the assassination.[41] Nina Simone wrote and sang "Mississippi Goddam" about the Evers case, and Phil Ochs wrote the songs "Another Country" and "Too Many Martyrs" (also titled "The Ballad Of Medgar Evers") in response to the killing. Matthew Jones and the Student Nonviolent Coordinating Committee Freedom Singers recorded the latter song.[41] Eudora Welty's short story "Where Is the Voice Coming From", in which the speaker is the imagined assassin of Medgar Evers, was published in The New Yorker in July 1963.[42]

Evers' story inspired a 1991 episode of the NBC TV series In the Heat of the Night, entitled "Sweet, Sweet Blues", written by author William James Royce. It recounts a murder of a young black man, and features an elderly white man, played by actor James Best, who appears to have gotten away with the 40-year-old murder. (The TV episode preceded by several years the state trial in which Beckwith was convicted.) In the Heat of the Night won its first NAACP Image Award for Best Dramatic Series that season.[43]

The 1996 film Ghosts of Mississippi, directed by Rob Reiner, tells the story of the 1994 trial of Beckwith, in which prosecutor DeLaughter of the Hinds County District Attorney's office secured a conviction in state court. Beckwith and DeLaughter were played by James Woods and Alec Baldwin, respectively; Whoopi Goldberg played Myrlie Evers. Evers was portrayed by James Pickens, Jr. The film was based on a book of the same name.[44][45]

The third season of the TV Series 'Mad Men', episode 5 'The Fog' featured a news story about Medgar Evers' funeral playing in the background while Don Draper awaits the birth of his child. It also shows an actor portraying a wounded Evers during a dream sequence. http://www.imdb.com/title/tt1484417/

Robert DeLaughter wrote a first-person narrative article entitled "Mississippi Justice" published in Reader's Digest, and a book, Never Too Late: A Prosecutor's Story of Justice in the Medgar Evers Case (2001), based on his experiences.[46]