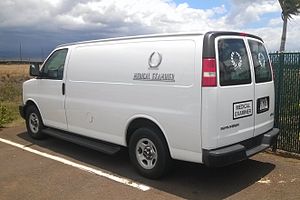 A medical examiner is a medically qualified officer whose duty is to investigate deaths and injuries that occur under unusual or suspicious circumstances, to perform post-mortem examinations, and in some jurisdictions to initiate inquests.[1]

In some jurisdictions, a coroner performs these and other duties. Within the United States, there is a mixture of coroner and medical examiner systems, and in some states, dual systems. The requirements to hold office vary widely between jurisdictions.

Pilot studies in Sheffield and 7 other areas, which involved medical examiners looking at more than 27,000 deaths since 2008, found 25% of hospital death certificates were inaccurate and 20% of causes of death were wrong. Suzy Lishman, president of the Royal College of Pathologists, said it was crucial there was "independent scrutiny of causes of death".[2]

Qualifications for medical examiners in the US vary from jurisdiction to jurisdiction. In Wisconsin, for example, some counties do not require individuals to have any special educational or medical training to hold this office.[3] In most jurisdictions, a medical examiner is required to have a medical degree, although in many this need not be in pathology. Other jurisdictions have stricter requirements, including additional education in pathology, law, and forensic pathology. Medical examiners are typically appointed officers.[4] They are typically medical officers that perform autopsy procedures on the human body.