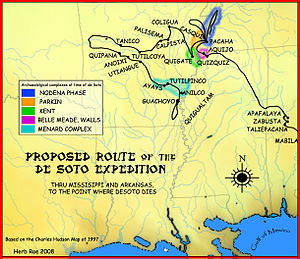 The site was excavated by James A. Ford in 1958. The excavations included burials, with graves in extended, flexed, and secondary interments scattered throughout the site and oriented in many different directions.[6] The site has yielded evidence of occupation as early as the Baytown Period (300-700 CE), all the way to the European contact period in the 16th century. The most unusual formation at the site is Mound A, which is conical in shape, and was built in two stages. Ceramics found at the site are consistent with native occupation at the time Henri de Tonti established the first French outpost nearby in 1686.[7]

The site was listed on the National Register of Historic Places in 1985, and declared a National Historic Landmark in 1989.[2][1] In 1997 the National Park Service acquired a tract of 360 acres (150 ha) which encompasses the site of the mound complex and the site believed to be that of Tonti's 1686 outpost. It is now administered as part of the Arkansas Post National Memorial, whose main site is 5 miles (8.0 km) (but 25 miles (40 km) by road) from the mound site.[8]