The MTP program was established to ensure the operational continuity between the end of the successful Meteosat Operational Programme in 1995 and Meteosat Second Generation (MSG), which came into operation at the start of 2004 using improved satellites. The MTP provides an overlap with MSG by continuing the current Meteosat system until at least the end of the year 2005. The MSG program will provide service until the MTG (Meteosat Third Generation) program takes over.

A photograph of a Meteosat First Generation satellite prior to launch

The first generation of Meteosat satellites, Meteosat-1 to Meteosat-7, provide continuous and reliable meteorological observations from space to a large user community. In addition to the provision of images of the Earth and its atmosphere every half-hour in three spectral channels (Visible, Infrared) and Water Vapour, via the Meteosat Visible and Infrared Imager (MVIRI) instrument, a range of processed meteorological products is produced. Meteosat also supports the retransmission of data from data collection platforms in remote locations, at sea and on board aircraft, as well as the dissemination of meteorological information in graphical and text formats.

The satellites were manufactured by a consortium COSMOS, with Aérospatiale in its Cannes Mandelieu Space Centre, as Prime, and included Matra, MBB, Selenia Spazio, Marconi Company. 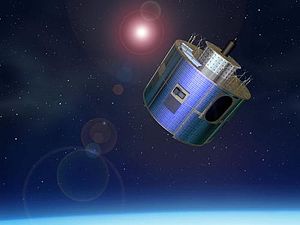 The contract for the second generation was awarded to Aérospatiale in its Cannes Mandelieu Space Centre (now Thales Alenia Space), with main subcontractors as Matra, Messerschmitt, Alenia.

Meteosat Second Generation was designed in response to user requirements to serve the needs of Nowcasting applications and numerical weather prediction. In addition the GERB instrument provides important data for climate monitoring and research.

The new satellites are spin-stabilised like the previous generation, but with many design improvements. The more frequent and comprehensive data collected by MSG also aids the weather forecaster in the swift recognition and prediction of dangerous weather phenomena such as thunderstorms, fog and explosive development of small but intense depressions which can lead to devastating wind storms. 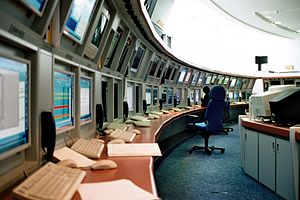 The MSG control centre in Darmstadt

MSG-4 was successfully launched into space on July 15, 2015 at 6:42 p.m. local time on top a Ariane V Rocket from the Guiana Space Centre in Kourou, French Guiana. Like MSG-1, MSG-2 and MSG-3, MSG-4 was launched by Arianespace. After MSG-4 commissioning the spacecraft is planned to be placed into in-orbit storage.

Each of MSG-1, MSG-2, and MSG-3 carries a DCP service and a Search and Rescue signal Processor (SARP) that is capable of detecting 406 MHz distress signals from distress radiobeacons.[4] See more under Cospas-Sarsat.

Considering the long development cycle for a new observational space system, EUMETSAT has been working on the definition and the planning for a Meteosat Third Generation (MTG) system since the year 2000. MTG components providing continuity of MSG services need to be available around 2015, before the end of the nominal lifetime of MSG. MTG preparatory activities started end of 2000 in cooperation with the European Space Agency (ESA), following the decision of the EUMETSAT Council to proceed with a Post-MSG User Consultation Process. The process is aimed at capturing the foreseeable needs of users of EUMETSAT's satellite data in the 2015-2025 timeframe.[5]

On March 19, 2010, ESA choose Thales Alenia Space for a final negotiation leading to a contract to be signed during June.[6]