From Infogalactic: the planetary knowledge core
Jump to: navigation, search
For the main settlement, see Stockport.

The Metropolitan Borough of Stockport is a metropolitan borough of Greater Manchester in North West England. As well as the town of Stockport, it includes the outyling areas of Cheadle, Cheadle Hulme, Marple, Bredbury, Reddish, Woodley and Romiley. In 2001, it had a population of 284,500.[1]

The borough was created in 1974, under the Local Government Act 1972 from the former area of the County Borough of Stockport and from the administrative county of Cheshire the urban districts of Bredbury and Romiley, Cheadle and Gatley, Hazel Grove and Bramhall and Marple.

Stockport became a county borough in 1889 and was enlarged by gaining territory from Lancashire, including in 1906 Reddish and in 1913, the Four Heatons.[2] The Marple Urban District of Cheshire, formed in 1894, gained parts of Derbyshire in 1936 including Mellor and Ludworth from Chapel en le Frith Rural District.[3]

Prior to its creation, it was suggested that the metropolitan borough be named "Norchester", but this was rejected as "a concocted name", being beaten by "Stockport" by a vote of 16 to 5.[4]

There are four parliamentary constituencies in the Stockport Metropolitan Borough: Stockport, Cheadle, Hazel Grove, and Denton and Reddish. Stockport has been represented by Ann Coffey (Labour) since 1992. Mary Robinson (Conservative) has been MP for Cheadle since 2015. William Wragg (Conservative) has been MP for Hazel Grove since 2015. The constituency of Denton and Reddish bridges Stockport and Tameside; the current member is Andrew Gwynne (Labour).

Stockport is part of the North West England constituency in the European Parliament. North West England elects nine MEPs, as at 2008 made up of four Conservatives, three from the Labour Party, one Liberal Democrat, and one member of the United Kingdom Independence Party.[5]

Showing former status (prior to 1974)

There are 21 electoral wards in Stockport, each with 3 councillors, giving a total of 63 councillors.

As of March 2008, the Liberal Democrats had a controlling majority on the council, having been the ruling party since 2002.[6]

Following the 2014 Local Elections no party has overall control. The Liberal Democrats remained the largest party despite losing a seat, but decided not to form a minority administration and strongly refused any possibility of a coalition with the Conservatives.[7]

The table below details the population change since 1801, including the percentage change since the last available census data. Although the Metropolitan Borough of Stockport has only existed 1974, figures have been generated by combining data from the towns, villages, and civil parishes that would later be constituent parts of the borough. 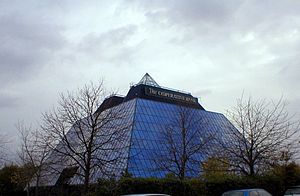 The Stockport pyramid, a call centre for The Co-operative Bank

At the 2001 UK census, Stockport had 204,812 residents aged 16 to 74. 2.4% of these people were students with jobs, 3.3% students without jobs, 5.4% looking after home or family, 5.0% permanently sick or disabled and 2.4% economically inactive for other reasons. These figures were generally inline with the national averages, although the proportion of people looking after home and family and students without jobs was significantly lower than the national average.[20]

In 2001, of 136,059 residents of Stockport in employment, the industry of employment was 17.3% retail and wholesale, 14.7% manufacturing, 13.8% property and business services, 11.7% health and social work, 8.9% education, 7.7% transport and communications, 6.1% construction, 5.3% finance, 4.6% public administration and defence, 4.1% hotels and restaurants, 0.7% energy and water supply, 0.6% agriculture, and 4.3% other. This was roughly in line with national figures, except for the proportion of jobs in agriculture which is less than half the national average, reflecting the city's suburban nature and its proximity to the centre of Manchester.[21] 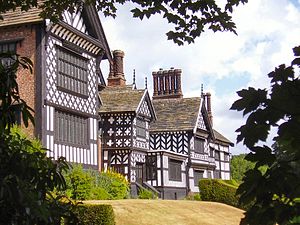 The east side of Bramall Hall, a Grade I listed building and Tudor mansion.

There are six Scheduled Ancient Monuments in the borough. Two date to the Bronze Age, a cairn in Ludworth and the Brown Low bowl barrow.[23][24] Two related to medieval halls, Peel Hall in Heaton Moor and Torkington Moat.[25][26] The final two were both built at the start of the 19th century, Oldknows Limekilns and the Marple Aqueduct.[27][28]

Overall, Stockport was ranked 21st out of the all the Local Education Authoritys in SATs performance – and 2nd in Greater Manchester – in 2006.[30] Authorised absences from and unauthorised absences from Stockport secondary schools in 2006-07 were 6.7% and 1.3% respectively, almost the same as the national average (6.8% and 1.3%).[31] In 2007, the Stockport LEA was ranked 30th out of 148 in the country – and 2nd in Greater Manchester – based on the percentage of pupils attaining at least 5 A*-C grades at GCSE including maths and English (50.0% compared with the national average of 45.8%).[32]