From Infogalactic: the planetary knowledge core
Jump to: navigation, search
Not to be confused with Mifflin, Juniata County, Pennsylvania.

Major employers in Mifflin County include: 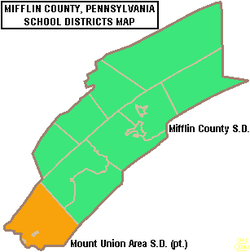 Most of the county is served by the Mifflin County School District, with the exception of Wayne Township and the boroughs of Newton-Hamilton and Kistler, which are part of the Mount Union Area School District.

Head Start is a federally and state funded preschool program for low income children. The program serves 3- and 4-year-olds. In order to participate the family income must be below federal poverty guidelines.

The Lewistown branch of the South Hills School of Business and Technology offers associate degrees and other certifications in various areas of business, technology, and some health care.

The Penn State Learning Center in Lewistown offers both two-year and four-year degrees. Recently, the Learning Center opened a state-of-the-art science lab to be used by students attending the Lewistown Hospital School of Nursing.

Mifflin County does not have a local television station but it is provided with local coverage from the following stations outside of the county, with a mixture of stations from the Harrisburg market and the Altoona-Johnstown-State College market:

Due to close proximity to the borough of State College, the most popular college sports team in Mifflin County is the Penn State football team. In professional football, loyalties divide between the Pittsburgh Steelers and the Philadelphia Eagles. Almost all Steelers and Eagles games are available live on network television, as Mifflin County receives stations from both the Steelers and Eagles broadcasting territories, though Baltimore Ravens games are also available through Harrisburg-based stations. The most popular baseball teams are the Pittsburgh Pirates and Philadelphia Phillies.

The girls field hockey team is one of the most successful high school teams.[citation needed]. As the schools combined, the competition grew harder as they faced the mid Penn conference[citation needed]. 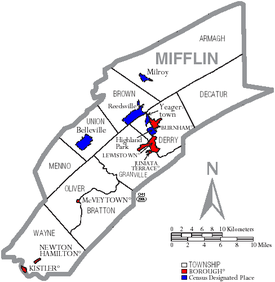 Under Pennsylvania law, there are four types of incorporated municipalities: cities, boroughs, townships, and, in at most two cases, towns. The following cities, boroughs and townships are located in Mifflin County: