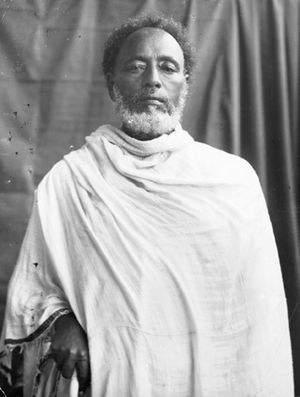 Negus Mikael of Zion, Governor of Wollo, circa 1915

Mikael of Wollo (1850 – 8 September 1918), born Imam Mohammed Ali,[1] was an army commander and a member of the nobility of the Ethiopian Empire. He was the father of the "uncrowned" Emperor Iyasu V. He changed his name to Mikael upon converting to Christianity.

Mohammed Ali was born in Wollo. His father was Oromo-Somali Imam Ali Abba Bula and his mother was Woizero Getie (from Warrahimano).

Mohammed Ali was a relative of Queen Worqitu of Wollo.[2] Queen Worqitu befriended the young Shewan Prince named Menelik when he escaped from Emperor Tewodros II. In the mid-1850s, Tewodros imprisoned the young man in his stronghold at Magdala. The imprisonment was not harsh and, while imprisoned, Menelik had married one of Tewodros's daughters.

Mohammed Ali became a close friend of Menelik who was six years older than he wasVT and was shortly to be proclaimed King of Shewa. In time, Menelik was proclaimed Emperor Menelik II and Mohammed Ali became one of his loyal supporters. As a result, by 1874 Menelik appointed Mohammed Ali as governor of Wollo.[2] However, when Mohammed returned to Wollo from a campaign with Menelik in Gojjam, he found his position threatened by an anti-Shewan revolt. He decided to forsake his friend to maintain his power base and sided with Yohannes IV, who was about to march on Shewa and likely to defeat Menelik. "Although this political manoeuvre succeeded over the longer run," Harold Marcus observes, "Mahammad Ali immediately suffered a crushing defeat at the hands of the Shewan army."[3]

Despite Menelik's victory over the Wollo, Emperor Yohannes induced him to submit 20 March 1878, which included transferring Mohammed Ali's allegiance from Menelik to Yohannes. Later that year, the Council of Boru Meda, held under the Emperor's direction, directed all Moslems holding office in Ethiopia convert to Christianity within three months or renounce their positions. "Having concluded that Wollo was worth a mass," Marcus writes, "Mohammad Ali led his people to Christianity." While he was baptized with the name "Mikael" and became a Ras (equivalent to "Duke"), many of his fellow Wollo Oromo refused to forsake their faith and left for sanctuary in Metemma, Jimma, and Harar.[4] Emperor Yohannes IV stood as his godfather at his baptism. Mikael of Wollo, as he was now known, eventually would marry Shoaregga Menelik,[nb 1] Menelik's natural daughter, becoming the third of his four wives. Mikael founded Dessie, the first town in Wollo and its new capital. Ras Mikael would become a deeply devout Orthodox Christian, and a dedicated builder of churches.

In 1896, during the First Italo-Ethiopian War, Mikael fought for Menelik and led the feared Oromo cavalry against the invading Italians at the Battle of Adowa. An Italian brigade began a fighting retreat towards the main Italian positions. However, the brigade inadvertently marched into a narrow valley where Mikael's cavalry slaughtered them while shouting "Reap! Reap!" (Ebalgume! Ebalgume!). The remains of the brigade's commander were never found.[5]

Following Menelik's death in 1913, Mikael's son, Lij Iyasu, ascended as Iyasu V. Per Menelik's wishes, Ras Tessema Nadew became the Regent for Menelik's 18-year-old grandson. However, that same year, Tessema Nadew died. While Iyasu was now on his own, he was never fully accepted. More importantly, he was never formally crowned Emperor. However, on the instructions of Iyasu, his father Mikael was anointed Negus.[nb 2] Mikael then became the power behind the throne.[6]

During World War I, concerns arose over Iyasu's ties to the Central Powers, over his possible support for Mohammed Abdullah Hassan, and over his potential conversion to Islam. In response to these concerns, on 27 September 1916, Iyasu was deposed by a council of nobles and high clergy, and Mikael's sister-in-law, Woizero Zewditu, was pronounced Negiste Negest ("Queen of Kings") Zewditu I. Zewditu was another of Menelik's daughters, and at the same time that she was made Empress, the council also proclaimed as Regent and Heir to the Throne, young Ras Tafari Makonnen, the future Emperor Haile Selassie I. The new Regent and Heir Ras Tafari was married to Woizero (later Empress) Menen Asfaw, a granddaughter of Negus Mikael by his daughter Woizero Sehin Mikael.

Negus Mikael's response to Iyasu being deposed was swift. On 7 October, Mikael set out from Wollo at the head of an army of 80,000 men to invade Shewa and to reinstate his son; Iyasu would join him there with an army of his own. On 27 October, Negus Mikael confronted the main body of the forces supporting Zewditu in the Battle of Segale. Mikael attacked first, but ammunition for his machine guns ran out early and his artillery was silenced quickly. His infantry and cavalry assaults ran directly into the murderous fire of an enemy ready for his attacks.[7] Iyasu was detoured on his way to the battlefield and arrived too late to help. He was only able to see that his father was defeated, and fled the battlefield and went into hiding.[8] Mikael was captured and put under the supervision of Fitawrari ("Commander of the Vanguard") Habte Giyorgis, who confined on an island in Lake Chabo in Gurageland. After two and a half years, Mikael successfully petitioned to Empress Zewditu to be moved from the island, and he was put under house arrest at Holeta Genet at a former country home of the late Emperor Menelik II, where he died six months later.[9] As the grandfather of the wife of the Crown Prince, the court went into full mourning for Negus Mikael.