The town is part of the historic Moravia region, located directly on the border with Lower Austria. In the south, a road border crossing leads to the neighbouring Austrian municipality of Drasenhofen. The highway is part of the European route E461 and is to be extended as the R52 expressway.

Mikulov is situated between the Pavlovské vrchy hilly area and the edge of the Mikulov Highlands, stretching up to the Thaya river and the three Nové Mlýny reservoirs. The Pálava Protected Landscape Area begins in Mikulov, and so does the Moravian Karst.

After the Margraviate of Moravia was established, the settlement of Nikulsburch was first mentioned in a 1249 deed, issued by the Přemyslid margrave Ottokar II who granted the land of Mikulov, including a castle, and the surrounding area to the Austrian noble Henry I of Liechtenstein. In 1262 the possession was confirmed by Ottokar, Bohemian king since 1253. After King Rudolf I of Germany had defeated Ottokar at the 1278 Battle on the Marchfeld, he vested Henry II of Liechtenstein with market rights in villa Nicolspurch. German citizens were called in and lived there until their expulsion in 1945 according to the Beneš decrees. 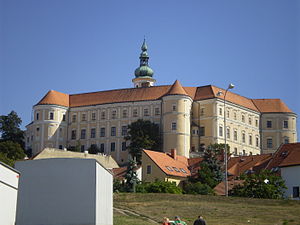 In 1526, the Anabaptist leader Balthasar Hubmaier came from Switzerland to Nikolsburg, where he was captured and arrested by the forces of the Habsburg king Ferdinand I in the following year. The town remained in the Liechtenstein family until 1560, and in 1572 Emperor Maximilian II granted the fief to his ambassador to the Spanish court Adam von Dietrichstein. From 1575 until the 20th century, Mikulov remained the proprietary possession of the Dietrichstein noble family and its Mensdorff-Pouilly successors.

In 1621, during the Thirty Years' War, Cardinal Franz von Dietrichstein signed the Treaty of Nikolsburg with the Transylvanian prince Gabriel Bethlen at Mikulov Castle. Four years later, Emperor Ferdinand II and his aulic council met at the castle, where General Albrecht von Wallenstein received his commission and was elevated to a Duke of Friedland. Franz von Dietrichstein also established the first Piarist college north of the Alps in Nikolsburg.

After a fire damaged the original Mikulov Castle in 1719, the Dietrichstein family reconstructed the chateau to its present appearance. After the Austro-Prussian War, Count Alajos Károlyi began work on a peace treaty in Mikulov that led to the Treaty of Prague in 1866. 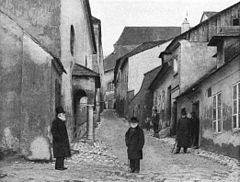 The beginning of the Jewish settlement in Mikulov dates as far as 1421, when Jews were expelled from Vienna and the neighboring province of Lower Austria by the duke of Austria, Albert II of Germany. The refugees settled in the town situated close to the Austrian border, some 85 kilometres (53 miles) from the Austrian capital, under the protection of the princes of Liechtenstein, and additional settlers were brought after the expulsions of the Jews from the Moravian royal boroughs by the king Ladislaus the Posthumous after 1454.[1]

The settlement grew in importance and in the first half of the 16th century when Mikulov became the seat of the regional rabbi of Moravia, thus becoming a cultural centre of Moravian Jewry. The famous rabbi Judah Loew ben Bezalel (1525 – 1609), who is said to have created the golem of Prague, officiated here for twenty years as the second regional rabbi between 1553 and 1573.[2] Cardinal Franz von Dietrichstein, son of Adam von Dietrichstein, was a special protector of the Jews, whose taxes were necessary to finance the Thirty Years' War.[3]

In the first half of the 18th century the congregation in Mikulov totalled over 600 families, being the largest Jewish settlement in Moravia. The census of 1754 decreed by Empress Maria Theresa of Austria ascertained that there were some 620 families established in Mikulov, i.e. the Jewish population of about 3,000 comprised half of the town‘s inhabitants.[1] It is obvious that only a small number of the Mikulov Jews could make their living in the town as artisans; the rest had to become merchants. The congregation suffered severely during the Silesian wars (1740–1742, 1744–1745 and 1756–1763), when they had to furnish the monarchy with their share in the supertaxes exacted by the government of Maria Theresa from the Jews of Moravia.[3]

Quite a number of Mikulov Jews continued to earn their livelihood in Vienna, where they were permitted to stay for some time on special passports. The freedom of residence, which was conceded to the Jews in Austria in 1848, reduced the number of resident Jews in Mikulov to less than one-third of the population which it contained at the time of its highest development. In 1904, there were 749 Jewish residents in the city, out of a total population of 8,192.[3] In 1938, prior to the German occupation of Czechoslovakia, the city population totaled about 8,000 mostly German-speaking inhabitants. Out of these, 472 were Jewish at this time.[1] The Jewish settlement in Mikulov ceased to exist during World War II, as only 110 managed to emigrate in time, and 327 of Mikulov's Jews did not survive the Holocaust.[1]

After Germany was defeated in World War II, the town's German population was expelled between 1945-46. In 1948, Mikulov's population was around 5,200. 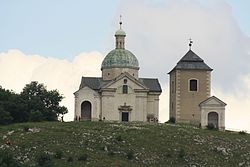 Mikulov is a centre of Czech wine-making due to its favorable geographic location and climate, as well as its unique history. Mikulov is not only the centre, but the namesake of, the Moravian wine sub-region vinarská podoblast Mikulovská.[5] Twelve registered cadastral vineyard tracts (Czech: trat) are situated within the Mikulov wine village as defined under the Czech Viticulture Act.[6] Other significant economic activities in Mikulov are the machine-making and clay industries, as well as oil found at the edge of the Viennese Basin.

Mikulov's historic buildings, such as Mikulov Castle, and the surrounding wine country draw tourists from the Czech Republic and neighboring countries. Beginning in Mikulov, the 65 kilometer long Mikulov Wine Trail winds throughout the Mikulov wine region and is a part of wine tourism in the area. Other noteworthy historic sights are the Dietrichstein sepulchre, the old Jewish Quarter, and the Piarist College. Several historic churches and a synagogue, built in various architectural styles, are located in Mikulov, including the Romanesque Church of St. Václav and charnel house, the Baroque Church of St. John the Baptist, St. Sebastian Chapel on the Holy Hill (Svatý Kopeček), the neo-Gothic Eastern Christian Church of St. Nicolas, and the Altschul Synagogue.

Mikulov is twinned with: