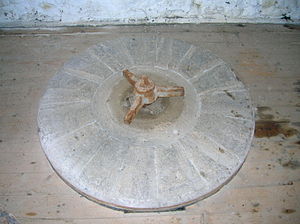 A bedstone and the rind 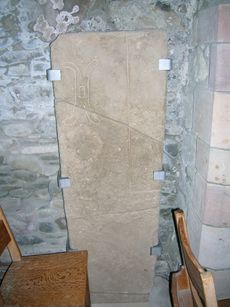 A rind on an early tombstone in Stobo Kirk

A millrind or simply rind is an iron support, usually four-armed or cross-shaped, for the turning ("runner") stone in a pair of millstones.

The rind is affixed to the top of the main shaft or spindle and supports the entire weight of the runner stone[citation needed], which can be as much as several tons. The rind is necessary because the grain is fed through the runner stone's central hole, so the spindle cannot be inserted through it like a cartwheel on an axle.

The face of a runner stone usually has a carved depression, called the "Spanish cross", to accommodate the millrind.

File:Millrynde.jpg
The arms of Sir William Saunsum: Or, a fer de moline sable (a gold shield with a millrind in black) 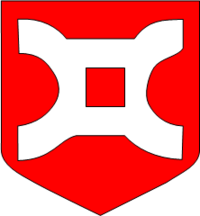 The fer-de-moline as depicted in French heraldry[1] 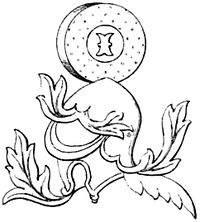 Crest of Baron Lisle (d.1355), KG, drawn from his Garter stall plate in St George's Chapel, Windsor: a mill-stone argent pecked sable the inner circle and the rim of the second the fer-de-moline or.

Armorials of Sir Guy Ferre (d.1323), A fer de moline over all a bendlet, in flushwork above the pedestrian entrance of Butley Priory, Suffolk 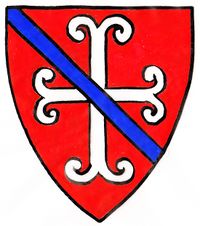 A millrind or fer de moline (French, literally "iron of a mill") is a rare heraldic charge, which takes its name from its form based on the physical object. An example is found in the arms of Sir William Saunsum,[2] blazoned in a roll of arms temp. Edward II. The exact form differs in variety from that illustrated in the Saunsum arms to a form almost identical to the "cross recercelée", appearing as an exaggerated form of the "cross moline", as borne by Ferre.[3] The evidence for the cross recercelée variety being correctly seen as a fer de moline, confirmed by Boutell,[4] is that the arms of Ferre were certainly designed to be canting arms, and that the arms sculpted at Butley Priory are indeed those of Guy Ferre (d.1323), who acquired the advowson of that place shortly before the gatehouse on which they appear was built.[5] Planché states "the modes of representing the cross moline, or millrind, are endless".[6]

The De Molines family of Sefton, England, whose surname eventually evolved into Molyneux, bore the cross moline on their coat of arms since early medieval times.