Millville is a city in Cumberland County, New Jersey, United States. As of the 2010 United States Census, the city's population was 28,400,[7][8][9] reflecting an increase of 1,553 (+5.8%) from the 26,847 counted in the 2000 Census, which had in turn increased by 855 (+3.3%) from the 25,992 counted in the 1990 Census.[17] Millville, Bridgeton and Vineland are the three principal New Jersey cities of the Vineland-Millville-Bridgeton Primary Metropolitan Statistical Area which encompasses those cities and all of Cumberland County for statistical purposes.[18]

Millville was originally incorporated as a township by an act of the New Jersey Legislature on February 24, 1801, from portions of Fairfield Township. Portions of the township were taken to form Landis Township on March 7, 1864. Millville was reincorporated as a city on March 1, 1866, based on the results of a referendum passed that same day.[19] The city derives its name from a proposal to create a mill town in the area.[20][21]

Known as "Shingle Landing" in its earliest days, a sawmill was believed to have existed at Leaming's Mill at around 1720.[22] The area also had a public road, a boat landing, and a bridge-like structure.

In 1790, Joseph Smith and Henry Drinker purchased 24,000 acres (97 km2) of land known as the Union Mills Tract. They formed the Union Estates Company, built lumber mills along the Maurice River and established a dam to power these new mills. Joseph Buck, an American Revolutionary War veteran who served under General George Washington, was part of a group that purchased the land in the area in 1795 and laid out the plans for what would become Millville.[23]

In 1806, an Irish immigrant, James Lee, opened the area's first glass factory, making use of the large amounts of silica sand and the ample wood that could be used to operate the plant.[24]

In the early 1850s, the Smith and Wood Iron Foundry and New Jersey Mills were constructed. In 1860, a bleachery and dye house were added to New Jersey Mills, which then became Millville Manufacturing. David Wood then constructed a dam, forming the largest man-made lake in the state, which powered the entire manufacturing organization. By 1870, the mill had 600 employees, and in 40 years this number doubled.

In 1862, Charles K. Landis laid out the city of Vineland about two and a half miles east of the Maurice River. In 1864, Vineland was separated from Millville Township and joined the new Landis Township.[19]

In 1936, the town was the site of Roosevelt Park, a project proposed by Effie Maud Aldrich Morrison as the country's first housing development for the elderly. The retirement colony was built on land which had been repossessed by the town of Millville for back taxes, and became known as the "Roosevelt Colony". It was later renamed to the "Roosevelt Park" old age colony, and was sometimes referred to as the Colony for the Aged at Roosevelt Park and Roosevelt Park Colony for Aged. When it opened on October 23, 1936, it became the first senior citizens retirement colony in the United States.[25]

The Millville Airport was dedicated "America's First Defense Airport" on August 2, 1941, by local, state, and federal officials.[26] In less than a year, construction of military base facilities began, and in January 1943, the Millville Army Air Field opened as a gunnery school for fighter pilots. Gunnery training began with Curtiss P-40 Warhawk aircraft, but after a few weeks was changed over to the Republic P-47 Thunderbolt. During its three-year existence, thousands of soldiers and civilians served here, with about 1,500 pilots receiving advanced fighter training in the Thunderbolt.[27] 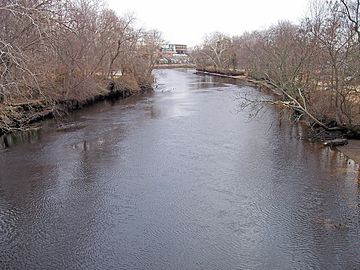 The Maurice River in Millville in 2006 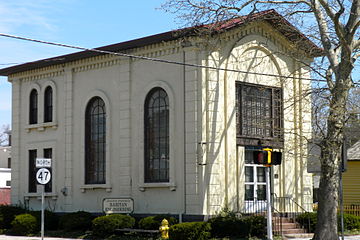 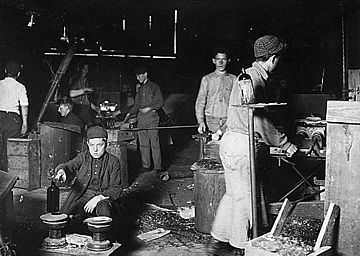 Following World War II, the airfield was declared excess to the governments needs, and returned to the City of Millville. Most of the airport buildings were converted to apartments for the many veterans returning from the war. The last of the apartments vanished in the early 1970s, and the airport soon became a hub of industry and aviation for Southern New Jersey.[28]

Up to the late 1990s the Millville downtown area was depressed and somewhat isolated, examples including the abandoned Levoy Theatre and Wheaton Glass Factory, with investors reluctant to venture in its development. Major redevelopment has occurred in the past several years; establishing the scenic Riverfront and Downtown areas into an artists' haven including many studios, shops and restaurants. Older abandoned buildings have been restored with continued major development is planned.

Millville has an arts district named the Glasstown Arts District. A public art center with galleries and studios is the hub of activity, and is open six days a week. The district includes seven full-time galleries, along with ten part-time galleries and studios, which are open mostly on weekends and on the third Friday of each month. Wheaton Arts and the Creative Glass Center of America includes a major collection of early American glass with contemporary glass from CGCA Fellows and working glass artists in a restored 19th century glass factory. The Levoy Theatre successfully re-opened on September 9, 2012.

Millville lies between the southern termini of the New Jersey Turnpike, the Garden State Parkway, Route 55 (which runs through the northeastern portion of the city) and the Atlantic City Expressway.

Millville has a Ukrainian community and is home to Sts. Peter and Paul Ukrainian Orthodox Church[46] and St Nicholas Ukrainian Catholic Church[47]

Portions of Millville are part of an Urban Enterprise Zone. In addition to other benefits to encourage employment within the Zone, shoppers can take advantage of a reduced 3½% sales tax rate (versus the 7% rate charged statewide) at eligible merchants.[48]

Millville is located in the 2nd Congressional District[62] and is part of New Jersey's 1st state legislative district.[8][63][64]

Millville Public Schools serves students in pre-Kindergarten through twelfth grade. The district is one of 31 former Abbott districts statewide,[87] which are now referred to as "SDA Districts" based on the requirement for the state to cover all costs for school building and renovation projects in these districts under the supervision of the New Jersey Schools Development Authority.[88][89]

The district has high school sending/receiving relationships with Commercial Township, Lawrence Township and Maurice River Township.[104][105] Students from Woodbine had attended the district's high school programs until a July 2013 ruling by the New Jersey Department of Transportation under which Woodbine students would start attending Middle Township High School as of September 2014, while Woodbine students who had already started attendance in Millville would be allowed to graduate.[106]

St. Mary Magdalen School is a Catholic school serving children in grades K-8 operating under the auspices of the Roman Catholic Diocese of Camden.[107] The school opened in 1882 with an enrollment of 45 students.[108] Former Camden Bishop Joseph Galante announced in January 2012 that the school would close in June due to poor finances resulting from a declining student body.[109]

New Jersey Transit has several bus routes that service the Millville region. Service includes the 313 route from Cape May to Philadelphia, the 408 route between Milville and Philadelphia and the 553 route from Upper Deerfield Township to Atlantic City.[112]

People who were born in, residents of, or otherwise closely associated with Millville include: