The Ministry of Home Security was a British government department established in 1939 to direct national civil defence (primarily air-raid defences) during the Second World War. 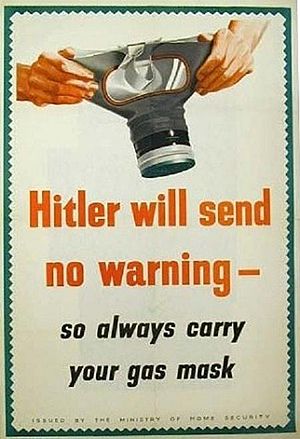 Ministry of Home Security poster used during the 'Phoney War'

Surprisingly, little had been done to defend against attacks on the civilian population during the First World War, and a need for such measures was seen in the years before 1939, so that plans for the new Ministry were in place when war broke out.

Twelve commissioners, acting for the government, were appointed to manage twelve regions of the UK. Their responsibilities included providing air raid shelters and air-raid wardens, gas officers, ambulances, and rescue operations. Millions of gas masks were distributed, and almost five million people were enrolled as fire-watchers and fire-fighters. The Ministry also had the task of making preparations for the possibility of an invasion, including plans for the British national communications infrastructure being destroyed by enemy action.

From 1939, there were twelve regional War Rooms and a national War Room. From 1941, the Ministry's central war room was in the North Rotunda, Great Peter Street, London.

Despite all defences, in the course of the War British civilians met heavy casualties, but organized civil defence undoubtedly saved thousands of lives.