The Miocene /ˈmaɪoʊsiːn/ (symbol MI[1]) is the first geological epoch of the Neogene Period and extends from about 23.03 to 5.332 million years ago (Ma). The Miocene was named by Sir Charles Lyell. Its name comes from the Greek words μείων (meiōn, “less”) and καινός (kainos, “new”)[2] and means "less recent" because it has 18% fewer modern sea invertebrates than the Pliocene. The Miocene follows the Oligocene Epoch and is followed by the Pliocene Epoch.

The earth went from the Oligocene through the Miocene and into the Pliocene as it cooled into a series of ice ages. The Miocene boundaries are not marked by a single distinct global event but consist rather of regional boundaries between the warmer Oligocene and the cooler Pliocene.

The apes arose and diversified during the Miocene, becoming widespread in the Old World. By the end of this epoch, the ancestors of humans had split away from the ancestors of the chimpanzees to follow their own evolutionary path. As in the Oligocene before it, grasslands continued to expand and forests to dwindle in extent. In the Miocene seas, kelp forests made their first appearance and soon became one of Earth's most productive ecosystems. [3] The plants and animals of the Miocene were fairly modern. Mammals and birds were well-established. Whales, seals, and kelp spread. The Miocene is of particular interest to geologists and palaeoclimatologists as major phases of the Himalayan orogeny had occurred during the Miocene affecting monsoonal patterns in Asia, which were interlinked with glaciations in the northern hemisphere.[4]

The Miocene faunal stages from youngest to oldest are typically named according to the International Commission on Stratigraphy:[5]

Two subdivisions each form the lower, middle and late Miocene. Regionally, other systems are used.

Continents continued to drift toward their present positions. Of the modern geologic features, only the land bridge between South America and North America was absent, although South America was approaching the western subduction zone in the Pacific Ocean, causing both the rise of the Andes and a southward extension of the Meso-American peninsula.

India continued to collide with Asia, creating dramatic new mountain ranges. The Tethys Seaway continued to shrink and then disappeared as Africa collided with Eurasia in the Turkish–Arabian region between 19 and 12 Ma. The subsequent uplift of mountains in the western Mediterranean region and a global fall in sea levels combined to cause a temporary drying up of the Mediterranean Sea (known as the Messinian salinity crisis) near the end of the Miocene.

The global trend was towards increasing aridity caused primarily by global cooling reducing the ability of the atmosphere to absorb moisture. Uplift of East Africa in the late Miocene was partly responsible for the shrinking of tropical rain forests in that region, and Australia got drier as it entered a zone of low rainfall in the Late Miocene.

Although a long-term cooling trend was well underway, there is evidence of a warm period during the Miocene when the global climate rivalled that of the Oligocene. The Miocene warming began 21 million years ago and continued until 14 million years ago, when global temperatures took a sharp drop—the Middle Miocene Climate Transition (MMCT). By 8 million years ago, temperatures dropped sharply once again, and the Antarctic ice sheet was already approaching its present-day size and thickness. Greenland may have begun to have large glaciers as early as 7 to 8 million years ago,[citation needed] although the climate for the most part remained warm enough to support forests there well into the Pliocene.

Life during the Miocene Epoch was mostly supported by the two newly formed biomes, kelp forests and grasslands. This allows for more grazers, such as horses, rhinoceroses,and hippos. Ninety five percent of modern plants existed by the end of this epoch. 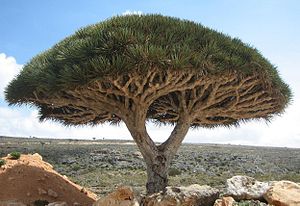 The dragon blood tree is considered a remnant of the Mio-Pliocene Laurasian subtropical forests that are now almost extinct in North Africa.[6]

The coevolution of gritty, fibrous, fire-tolerant grasses and long-legged gregarious ungulates with high-crowned teeth, led to a major expansion of grass-grazer ecosystems, with roaming herds of large, swift grazers pursued by predators across broad sweeps of open grasslands, displacing desert, woodland, and browsers. The higher organic content and water retention of the deeper and richer grassland soils, with long term burial of carbon in sediments, produced a carbon and water vapor sink. This, combined with higher surface albedo and lower evapotranspiration of grassland, contributed to a cooler, drier climate.[7] C4 grasses, which are able to assimilate carbon dioxide and water more efficiently than C3 grasses, expanded to become ecologically significant near the end of the Miocene between 6 and 7 million years ago.[8] The expansion of grasslands and radiations among terrestrial herbivores correlates to fluctuations in CO2.[9]

Cycads between 11.5 and 5 m.y.a. began to rediversify after previous declines in variety due to climatic changes, and thus modern cycads are not a good model for a "living fossil".[10] 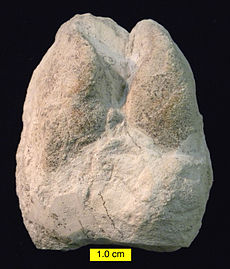 Both marine and continental fauna were fairly modern, although marine mammals were less numerous. Only in isolated South America and Australia did widely divergent fauna exist.

In the Early Miocene, several Oligocene groups were still diverse, including nimravids, entelodonts, and three-toed equids. Like in the previous Oligocene epoch, oreodonts were still diverse, only to disappear in the earliest Pliocene. During the later Miocene mammals were more modern, with easily recognizable canids, bears, procyonids, equids, beavers, deer, camelids, and whales, along with now extinct groups like borophagine canids, certain gomphotheres, three-toed horses, and semiaquatic and hornless rhinos like Teleoceras and Aphelops. Islands began to form between South and North America in the Late Miocene, allowing ground sloths like Thinobadistes to island-hop to North America. The expansion of silica-rich C4 grasses led to worldwide extinctions of herbivorous species without high-crowned teeth.[11] 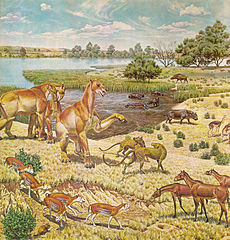 Unequivocally recognizable dabbling ducks, plovers, typical owls, cockatoos and crows appear during the Miocene. By the epoch's end, all or almost all modern bird groups are believed to have been present; the few post-Miocene bird fossils which cannot be placed in the evolutionary tree with full confidence are simply too badly preserved, rather than too equivocal in character. Marine birds reached their highest diversity ever in the course of this epoch.

Approximately 100 species of apes lived during this time, ranging throughout Africa, Asia and Europe and varying widely in size, diet, and anatomy. Due to scanty fossil evidence it is unclear which ape or apes contributed to the modern hominid clade, but molecular evidence indicates this ape lived between 7 and 8 million years ago.[12] The first hominins (bipedal apes of the human lineage) appeared in Africa at the very end of the Miocene, including Sahelanthropus, Orrorin, and an early form of Ardipithecus (A. kadabba).[13]

Cetaceans attained their greatest diversity during the Miocene,[14] with over 20 recognized genera in comparison to only six living genera.[15] This diversification correlates with emergence of gigantic macro-predators such as megatoothed sharks and raptorial sperm whales.[16] Prominent examples are C. megalodon and L. melvillei.[16] Other notable large sharks were C. chubutensis, Isurus hastalis, and Hemipristis serra.

Crocodilians also showed signs of diversification during Miocene. The largest form among them was a gigantic caiman Purussaurus which inhabited South America.[17] Another gigantic form was a false gharial Rhamphosuchus, which inhabited modern age India. A strange form Mourasuchus also thrived alongside Purussaurus. This species developed a specialized filter-feeding mechanism, and it likely preyed upon small fauna despite its gigantic size.

The pinnipeds, which appeared near the end of the Oligocene, became more aquatic. Prominent genus was Allodesmus.[18] A ferocious walrus, Pelagiarctos may have preyed upon other species of pinnipeds including Allodesmus. 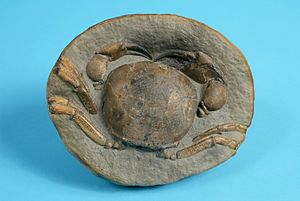 There is evidence from oxygen isotopes at Deep Sea Drilling Program sites that ice began to build up in Antarctica about 36 Ma during the Eocene. Further marked decreases in temperature during the Middle Miocene at 15 Ma probably reflect increased ice growth in Antarctica. It can therefore be assumed that East Antarctica had some glaciers during the early to mid Miocene (23–15 Ma). Oceans cooled partly due to the formation of the Antarctic Circumpolar Current, and about 15 million years ago the ice cap in the southern hemisphere started to grow to its present form. The Greenland ice cap developed later, in the Middle Pliocene time, about 3 million years ago.

The "Middle Miocene disruption" refers to a wave of extinctions of terrestrial and aquatic life forms that occurred following the Miocene Climatic Optimum (18 to 16 Ma), around 14.8 to 14.5 million years ago, during the Langhian stage of the mid-Miocene. A major and permanent cooling step occurred between 14.8 and 14.1 Ma, associated with increased production of cold Antarctic deep waters and a major growth of the East Antarctic ice sheet. A Middle Miocene δ18O increase, that is, a relative increase in the heavier isotope of oxygen, has been noted in the Pacific, the Southern Ocean and the South Atlantic.[19]