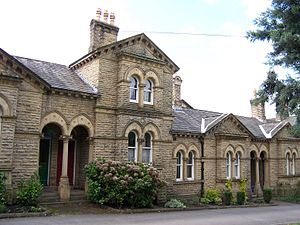 Almshouses in Saltaire, Yorkshire, typical of the architecture of the whole village

A model village is a type of mostly self-contained community, built from the late 18th century onwards by landowners and industrialists to house their workers. Although the villages are located close to the workplace, they are generally physically separated from them and often consist of relatively high quality housing, with integrated community amenities and attractive physical environments. "Model" is used in the sense of an ideal to which other developments could aspire. 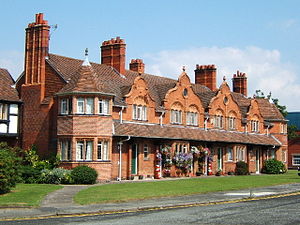 An example of houses at Port Sunlight. 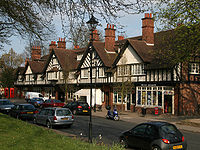 The term model village was first used by the Victorians to describe the new settlements created on the rural estates of the landed gentry in the 18th century. As landowners sought to improve their estates for aesthetic reasons, new landscapes were created and the cottages of the poor were demolished and rebuilt out of sight of their country house vistas.[1] New villages were created at Nuneham Courtenay when the village was rebuilt as plain brick dwellings either side of the main road, at Milton Abbas the village was moved and rebuilt in a rustic style and Blaise Hamlet near Bath had individually designed buildings, some with thatched roofs. [2]

The Swing Riots of 1830 highlighted poor housing in the countryside, ill health and immorality and landowners had a responsibility to provide cottages with basic sanitation. The best landlords provided accommodation but many adopted a paternalistic attitude when they built model dwellings and imposed their own standards on the tenants charging low rents but paying low wages.[3]

As the Industrial Revolution took hold, industrialists who built factories in rural locations provided housing for workers clustered around the workplace. An early example of an industrial model village was New Lanark built by Robert Owen.[4] Philanthropic coal owners provided decent accommodation for miners from the early 19th century. Earl Fitzwilliam, a paternalistic colliery owner provided houses near his coal pits in Elsecar near Barnsley that were "...of a class superior in size and arrangement, and in conveniences attached, to those of working classes."[5] They had four rooms and a pantry, and outside a small garden and pig sty.[6]

Others were established by Edward Akroyd at Copley between 1849 and 1853 and Ackroyden 1861-63. Akroyd employed Giles Gilbert Scott. Titus Salt built a model village at Saltaire.[7] Henry Ripley, owner of Bowling Dyeworks, began construction of Ripley Ville in Bradford in 1866.[8] Industrial communities were established at Prices Village[9] by Prices Patent Candle Company and at Aintree by Hartley's who made jam in 1888. William Lever's Port Sunlight had a village green and its houses espoused an idealised rural vernacular style.[7] Quaker industrialists, George Cadbury and Rowntrees built model villages by their factories. Cadbury built Bournville between 1898 and 1905 and a second phase from 1914 and New Earswick was built in 1902 for Rowntrees.[10]

In the 1920s Silver End model village in Essex was built for Francis Henry Crittall. Its houses were designed in an art deco-style with flat roofs and Crittall windows.[11] The more recent development of Poundbury, a model village in rural Dorset has been supported by the Prince of Wales.

File:Ripley Ville alms houses.jpg
Almshouses at Ripley Ville, Yorkshire. Built 1881 and now the only remaining example of the architecture of the village

In Germany, Stadt des KdF-Wagens was built for the Volkswagen factory.

In Italy's Lombardy region, Crespi d’Adda is a particularly well-preserved model workers' village, and has been a World Heritage Site since 1995. It was built from scratch, starting in 1878, to provide housing and social services for the workers in a cotton textile factory erected on the banks of the river Adda. 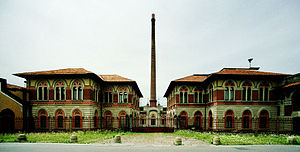 The town of Nuevo Baztán outside of Madrid dates from the mercantilist and entrepreneurial ambitions of an industrialist from the early 18th century.

The term model villages refers to the forcible resettlement programme for civil war refugees in Guatemala developed by the national government to isolate civilians from guerrillas by confining them to closed garrison towns. The system was based on the Strategic Hamlet Program in Vietnam instituted by the US military and the Diem regime during the earlier parts of the Vietnam War,[19] and has parallels with the village guard system enforced by the Turkish government during the Turkish-Kurdish conflict.[20]

The first model villages appeared during the Porfirio Diaz regime, the most notable being Metepec and Tlacotalpan. 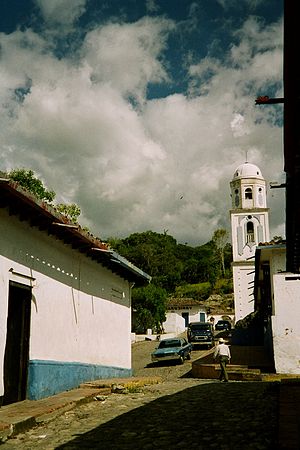 Model villages were also built in the United States along the same lines as planned industrial communities, for example at Gwinn, Michigan and Pullman, Illinois. There were also such agricultural communities as the 18th century Davis Bend, Mississippi. Boulder City, Nevada was originally built in 1931 for housing for workers who were building Hoover Dam.

India has its equivalent as model town. The first was Model Town, Bathinda put up with exclusive purpose of housing the employees of Guru Nanak Thermal Plant. Similar model towns are attached with many Indian cities.