Mogollon culture /mʌɡᵻˈjoʊn, moʊ-/[1] is an archaeological culture of indigenous peoples from Southern New Mexico and Arizona, Northern Sonora and Chihuahua, and Western Texas, a region known as Oasisamerica.[2][3][4]

The Mogollon culture is one of the four major prehistoric Southwestern cultural divisions of the Southwestern United States and Northern Mexico.[5] The culture flourished from the archaic period, ca. 200 CE, to either 1450[6] or 1540 CE, when the Spanish arrived.[5] 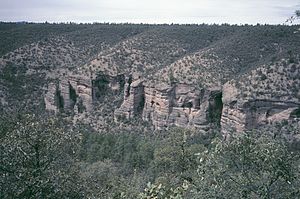 The rock wall of the canyon, the Cueva de las Ventanas cliff-dwelling is located left of center above a debris-covered cone.

The name Mogollon comes from the Mogollon Mountains,[6] which were named after Don Juan Ignacio Flores Mogollón, Spanish Governor of New Spain (including what is now New Mexico) from 1712 to 1715. The name was chosen and defined in 1936 by archaeologist Emil W. Haury.[5]

The distinct facets of Mogollon culture were recorded by Emil Haury, based on his excavations in 1931, 1933, and 1934 at the Harris Village in Mimbres, New Mexico, and the Mogollon Village on the upper San Francisco River in New Mexico[7] Haury recognized differences between architecture and artifacts from these sites as compared with sites in the Hohokam archaeological culture area and the Ancestral Pueblo archaeological culture area. Key differences included brown-paste, coil-and-scrape pottery, deeply excavated semi-subterranean pithouses and different ceremonial architecture. Eight decades of subsequent research have confirmed Haury's initial findings.[8] Today, the distinctiveness of the Mogollon pottery manufacture, architectural construction, ground-stone tool design, habits and customs of residence location, and mortuary treatment is generally recognized.[9][10]

The earliest Mogollon pithouses were deep and either circular or oval-shaped. Over time, Mogollon people built rectangular houses with rounded corners and not as deep. Their villages also had kivas, or round, semi-subterranean ceremonial structures.[11] 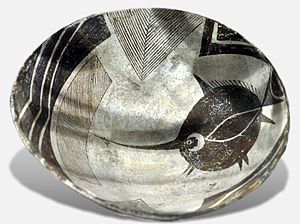 Mogollon origins remain a matter of speculation. One model holds that the Mogollon emerged from a preceding Desert Archaic tradition that links Mogollon ancestry with the first (late Pleistocene) prehistoric human occupations of area (around 9000 BCE). In this model, cultural distinctions emerged in the larger region when populations grew great enough to establish villages and even larger communities. An alternative possibility holds that the Mogollon were descendants of early farmers who migrated from farming regions in central Mexico around 3500 BCE, and who displaced descendants of the antecedent Desert Archaic peoples. A third view is that at the time of the shift from hunting and gathering to agriculture the Cochise culture[11] (the early pithouse, late Desert Archaic, antecedents of the Mogollon) had been immigrants into the area about 5000 BCE, and were not linked to the earlier inhabitants, but were receptive to cultural dissemination from the farmers of Central Mexico.[citation needed]

The Mogollon were, initially, foragers who augmented their subsistence efforts by farming. Through the first millennium CE, however, dependence on farming probably increased. Water control features are common among Mimbres branch sites from the 10th through 12th centuries CE.

The nature and density of Mogollon residential villages changed through time. The earliest Mogollon villages are small hamlets composed of several pithouses (houses excavated into the ground surface, with stick and thatch roofs supported by a network of posts and beams, and faced on the exterior with earth). Village sizes increased over time and by the 11th century surface pueblos (ground level dwellings made with rock and earth walls, and with roofs supported by post and beam networks) became common. Cliff-dwellings became common during the 13th and 14th centuries.

Research on Mogollon culture has led to the recognition of regional variants, of which the most widely recognized in popular media is the Mimbres culture (Mimbres Mogollon branch). Others include the Jornada, Forestdale, Reserve, Point of Pines (or "Black River"), San Simon, and Upper Gila branches. Although the Mimbres culture is the most well-known subset of the Mogollon archaeological culture-area, the entire Mogollon occupation spans a greater interval of time (roughly one millennium) and a vastly larger area than is encompassed by the Mimbres culture. 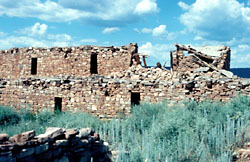 An alternate way of viewing Mogollon culture is through three periods of housing types:

Archaeological sites attributed to the Mogollon culture are found in the Gila Wilderness, Mimbres River Valley, along the Upper Gila river, Paquime and Hueco Tanks, an area of low mountains between the Franklin Mountains to the west and the Hueco Mountains to the east. Gila Cliff Dwellings National Monument in southwestern New Mexico was established as a National Monument on 16 November 1907. It contains several archaeological sites attributed to the Mimbres branch. At the headwaters of the Gila, Mimbres populations adjoined another more northern branch of the Mogollon culture. The TJ Ruin, for example, is a Classic Mimbres phase pueblo, however the cliff dwellings are Tularosa phase. The Hueco Tanks State Historic Site is approximately 32 mi (51 km) northeast of El Paso, Texas.[14] 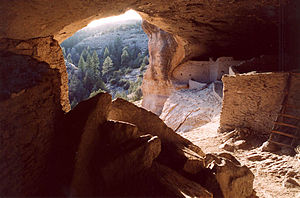 Looking out from one of the Gila Cliff cave dwellings

Mimbres may, depending on its context, refer to a tradition within a subregion of the Mogollon culture area (the Mimbres branch or the Mimbres Mogollon) or to an interval of time, the "Classic Mimbres phase" (also known as the "Mimbres culture"; 1000–1130 CE, roughly) within the Mimbres branch.

The Mimbres branch is a subset of the larger Mogollon culture area, centered in the Mimbres Valley and encompassing the upper Gila River and parts of the upper San Francisco River in southwestern New Mexico and southeastern Arizona as well as the Rio Grande Valley and it western tributaries in southwest New Mexico. Differentiation between the Mimbres branch and other areas of the Mogollon culture area is most apparent during the Three Circle (825–1000 CE roughly) and Classic Mimbres (1000–1150) phases, when architectural construction and black and white painted pottery assume locally distinctive forms and styles.[15] Classic Mimbres phase pottery is particularly famous pottery, and Classic Mimbres pottery designs (mainly drawn from the Swarts Ruin excavations of 1924–1927) were imitated on Santa Fe Railroad "Mimbreños" china dinnerware from 1936 to 1970. 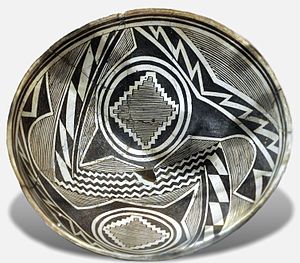 Classic Mimbres phase (AD 1000–1130) pueblos can be quite large, with some composed of clusters of communities, each containing up to 150 rooms and all grouped around an open plaza. Ceremonial structures were different from the previous pithouse periods. Most common were ceremonial rooms within roomblocks. Smaller square or rectangular semi-subterranean kivas with roof openings are also found. (It should be noted that the word "kiva", a Hopi term with specific meaning, has generally been applied to Northern Pueblo populations. It may be a poor term in discussing the Mogollon in their broadest contexts.[16]) The largest Classic Mimbres sites are located near wide areas of well-watered floodplain suitable for maize agriculture, although smaller villages exist in upland areas. 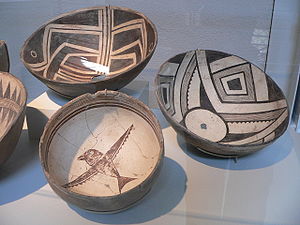 Ceramics, especially bowls, produced in the Mimbres region is distinct in style and painted with geometric designs and representational images of animals, people, and cultural icons in black paint on a white background. Some of these images suggest familiarity and relationships with cultures in northern and central Mexico. The elaborate decoration suggest the Mimbres Mogollons enjoyed a rich ceremonial life. Early Mimbres black-on-white pottery, called Mimbres Style I (formerly "Boldface Black-on-White"), is primarily characterized by bold geometric designs, although some early examples feature of human and animal figures. 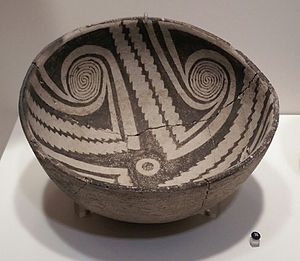 Both geometric and figurative designs grew increasingly sophisticated and diverse over time. Classic Mimbres Black-on-White pottery (Style III) is characterized by elaborate geometric designs, refined brushwork, including very fine linework, and may include figures of one or more animals, humans, or other images bounded either by simple rim bands or by geometric decoration. Birds figure prominently on Mimbres pots, including images such as turkeys feeding on insects and a man trapping birds in a garden. Fish are also common.

Mimbres bowls are often found associated with burials, typically with a hole punched out of the center, known as kill holes. Most commonly Mimbres bowls have been found covering the face of the interred person. Wear marks on the insides of bowls show they were actually used, not just produced as burial items.

Mimbres pottery is so distinctive that until fairly recently, the end of its production around 1130 to 1150 was equated with the "disappearance" of the people who made it. More recent research indicates that substantial depopulation did occur in the Mimbres Valley, but some remnant populations persisted there.[17] Both there and in surrounding areas, people changed their pottery styles to more closely resemble those of neighboring culture areas, and dispersed into other residential sites with different types of architecture.

The area originally settled by the Mogollon culture was eventually filled by the unrelated Apache people, who moved in from the north. However, contemporary Pueblo people in the southwest claim descent from the Mogollon and other related cultures.[18][19] Archaeologists believe that the Western Pueblo villages of the Hopi and Zuni people are potentially related to the Mogollon [20] Ceramics traditions and oral history link the Acoma, Hopi, and Zuni, to the Mogollon.[21]