Mongol invasions and conquests progressed throughout the 13th century, resulting in the vast Mongol Empire, which, by 1300, covered much of Asia and Eastern Europe. Historians regard the Mongol raids and invasions as some of the deadliest conflicts in human history. In addition, they brought the bubonic plague along with them, spreading it across much of Asia and Europe and helping cause the massive loss of life in the Black Death.[1][2][3][4]

The Mongol Empire emerged in the course of the 13th century by a series of conquests and invasions throughout Central and Western Asia, reaching Eastern Europe by the 1240s. 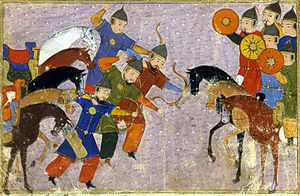 Battle of Vâliyân against the Khwarazmian dynasty.

Genghis Khan forged the initial Mongol Empire in Central Asia, starting with the unification of the Mongol and Turkic confederations such as Merkits, Tartars, and Mongols. The Uighur Buddhist Qocho Kingdom surrendered and joined the empire. He then continued expansion of the empire via conquest of the Qara Khitai[5] and the Khwarazmian dynasty.

Large areas of Islamic Central Asia and northeastern Iran were seriously depopulated,[6] as every city or town that resisted the Mongols was subject to destruction. Each soldier was required to execute a certain number of persons, with the number varying according to circumstances. For example, after the conquest of Urgench, each Mongol warrior – in an army group that might have consisted of two tumens (units of 10,000) – was required to execute 24 people.[7][better source needed]

Against the Alans and the Cumans (Kipchaks), the Mongols used divide and conquer tactics by first telling the Cumans to stop allying with the Alans and after the Cumans followed their suggestion the Mongols then attacked the Cumans[8] after defeating the Alans.[9] Alans were recruited into the Mongol forces with one unit called "Right Alan Guard" which was combined with "recently surrendered" soldiers, Mongols, and Chinese soldiers stationed in the area of the former Kingdom of Qocho and in Besh Balikh the Mongols established a Chinese military colony led by Chinese general Qi Kongzhi (Ch'i Kung-chih).[10]

Hungary became a refuge after the Mongol invasions for fleeing Cumans.[12]

The de-centralized stateless Kipchaks only converted to Islam after the Mongol conquest unlike the centralized Karakhanid entity made out of the Yaghma, Qarluqs, and the Oghuz who converted to world religions.[13]

The Mongol conquest of the Kipchaks led to a merged society with the Mongol ruling class over a Kipchak speaking population which came to be known as Tatar and which eventually absorbed other ethnicities on the Crimean peninsula like Armenians, Italians, Greeks, and Goths to form the modern day Crimean Tatar people.[14] 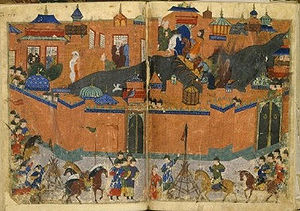 The Mongols conquered, either by force or voluntary submission, the areas today known as Iran, Iraq, Syria, Caucasus and parts of Turkey, with further Mongol raids reaching southwards as far as Gaza into the Palestine region in 1260 and 1300. The major battles were the Siege of Baghdad (1258), when the Mongols sacked the city which for 500 years had been the center of Islamic power; and the Battle of Ain Jalut in 1260, when the Muslim Egyptian Mamluks were for the first time able to stop the Mongol advance at Ain Jalut in the southern part of the Galilee. One thousand northern Chinese engineer squads accompanied the Mongol Khan Hulagu during his conquest of the Middle East.[15][16] 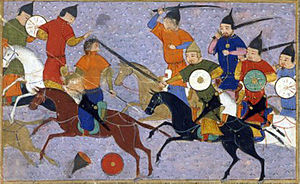 Battle of Yehuling against the Jin dynasty.

Genghis Khan and his descendants launched numerous invasions of China, subjugating the Western Xia in 1209 before destroying them in 1227, defeating the Jin dynasty in 1234 and defeating the Song dynasty in 1279. They made the Kingdom of Dali into a vassal state in 1253 after the Dali King Duan Xingzhi defected to the Mongols and helped them conquer the rest of Yunnan, forced Korea to capitulate through invasions, but failed in their attempts to invade Japan. 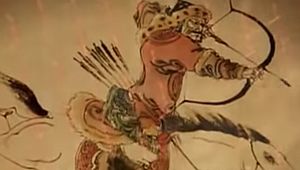 The Mongol force which invaded southern China was far greater than the force they sent to invade the Middle East in 1256.[18]

The Mongols' greatest triumph was when Kublai Khan established the Yuan dynasty in China in 1271. The top-level government agency Bureau of Buddhist and Tibetan Affairs was established to govern Tibet, which was conquered by the Mongols and put under Yuan rule. The Mongols also invaded Sakhalin between 1264 and 1308. Likewise, Korea (Goryeo) became a semi-autonomous vassal state and compulsory ally of the Yuan dynasty for about 80 years. The Yuan dynasty was eventually overthrown during the Red Turban Rebellion in 1368 by the Han Chinese who gained independence and established the Ming dynasty. 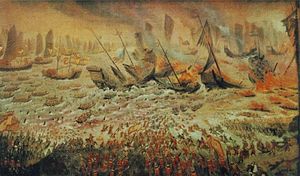 The Battle of Bạch Đằng against Vietnam.

Kublai Khan's Yuan dynasty invaded Burma between 1277 and 1287, resulting in the capitulation and disintegration of the Pagan Kingdom. However, the invasion in 1301 was repulsed by the Burmese Myinsaing Kingdom. The Mongol invasions of Vietnam (then known as Đại Việt) and Java resulted in defeat for the Mongols, although much of South Asia agreed to pay tribute in order to avoid further bloodshed.[19][20][21][22][23][24][25] 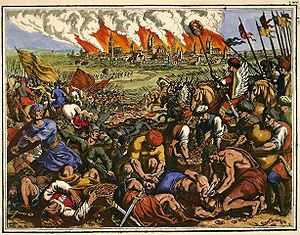 The Battle of Legnica took place during the first Mongol invasion of Poland. 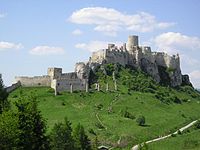 The Mongol invasion in the 13th century led to construction of mighty stone castles, such as Spiš Castle in Slovakia.

The Mongols invaded and destroyed Volga Bulgaria and Kievan Rus', before invading Poland, Hungary and Bulgaria, and others. Over the course of three years (1237–1240), the Mongols destroyed and annihilated all of the major cities of Russia with the exceptions of Novgorod and Pskov.[26]

Giovanni da Pian del Carpine, the Pope's envoy to the Mongol Great Khan, traveled through Kiev in February 1246 and wrote:

They [the Mongols] attacked Rus, where they made great havoc, destroying cities and fortresses and slaughtering men; and they laid siege to Kiev, the capital of Rus; after they had besieged the city for a long time, they took it and put the inhabitants to death. When we were journeying through that land we came across countless skulls and bones of dead men lying about on the ground. Kiev had been a very large and thickly populated town, but now it has been reduced almost to nothing, for there are at the present time scarce two hundred houses there and the inhabitants are kept in complete slavery.[27]

The Mongol invasions induced population displacement on a scale never seen before in central Asia as well as eastern Europe. Word that the Mongol hordes were coming would spread spread terror and panic.[28]