Montreux Convention Regarding the Regime of the Straits

The Montreux Convention Regarding the Regime of the Straits is a 1936 agreement that gives Turkey control over the Bosporus Straits and the Dardanelles and regulates the transit of naval warships. The Convention gives Turkey full control over the Straits and guarantees the free passage of civilian vessels in peacetime. It restricts the passage of naval ships not belonging to Black Sea states. The terms of the convention have been the source of controversy over the years, most notably concerning the Soviet Union's military access to the Mediterranean Sea.

Signed on 20 July 1936 at the Montreux Palace [1] in Switzerland, it permitted Turkey to remilitarise the Straits. It went into effect on 9 November 1936 and was registered in League of Nations Treaty Series on 11 December 1936.[2] It is still in force today, with some amendments.

The proposed 21st century Kanal Istanbul project may constitute a possible by-pass to the Montreux Convention and force greater Turkish autonomy with respect to the passage of military ships from the Black Sea to the Sea of Marmara.[3][4] 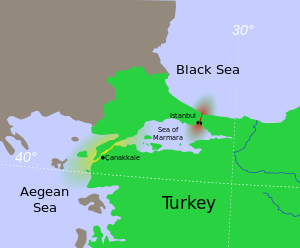 The convention was one of a series of agreements in the 19th and 20th centuries that sought to address the long-running "Straits Question" of who should control the strategically vital link between the Black Sea and Mediterranean Sea. In 1923 the Treaty of Lausanne had demilitarised the Dardanelles and opened the Straits to unrestricted civilian and military traffic, under the supervision of the International Straits Commission of the League of Nations.

By the late 1930s, the strategic situation in the Mediterranean had altered with the rise of Fascist Italy, which controlled the Greek-inhabited Dodecanese islands off the west coast of Turkey and had constructed fortifications on Rhodes, Leros and Kos. The Turks feared that Italy would seek to exploit access to the Straits to expand its power into Anatolia and the Black Sea region. There were also fears of Bulgarian rearmament.[5] Although Turkey was not permitted to refortify the Straits, it nonetheless did so secretly.[6]

In April 1935, the Turkish government dispatched a lengthy diplomatic note to the signatories of the Treaty of Lausanne proposing a conference on the agreement of a new regime for the Straits and requested that the League of Nations authorise the reconstruction of the Dardanelles forts. In the note, Turkish foreign minister Tevfik Rüştü Aras explained that the international situation had changed greatly since 1923. At that time, Europe had been moving towards disarmament and an international guarantee to defend the Straits. The Abyssinia Crisis of 1934–35, the denunciation by Germany of the Treaty of Versailles and international moves towards rearmament meant that "the only guarantee intended to guard against the total insecurity of the Straits has just disappeared in its turn." Indeed, Aras said, "the Powers most closely concerned are proclaiming the existence of a threat of general conflagration." The key weaknesses of the present regime were that the machinery for collective guarantees were too slow and ineffective, there was no contingency for a general threat of war and no provision for Turkey to defend itself. Turkey was therefore prepared

to enter into negotiations with a view to arriving in the near future at the conclusion of agreements for regulations of the regime of the Straits under the conditions of security which are indispensable for the inviolability of Turkey's territory, in most liberal spirit, for the constant development of commercial navigation between the Mediterranean and the Black Sea.

The response to the note was generally favourable, and Australia, Bulgaria, France, Germany, Greece, Japan, Romania, the Soviet Union, Turkey, the United Kingdom and Yugoslavia agreed to attend negotiations at Montreux in Switzerland, which began on 22 June 1936. Two major powers were not represented: Italy, whose aggressively expansionist policies had prompted the conference in the first place, refused to attend and the United States declined even to send an observer.[7]

Turkey, the UK and the Soviet Union each put forward their own set of proposals, aimed chiefly at protecting their own interests. The British favoured the continuation of a relatively restrictive approach, while the Turks sought a more liberal regime that reasserted their own control over the Straits and the Soviets proposed a regime that would guarantee absolute freedom of passage. The British, supported by France, sought to exclude the Soviet fleet from the Mediterranean Sea, where it might have threatened the vital shipping lanes to India, Egypt and the Far East.[8] In the end, the British conceded some of their requests while the Soviets succeeded in ensuring that the Black Sea countries – including the USSR – were given some exemptions from the military restrictions imposed on non-Black Sea nations. The agreement was ratified by all of the conference attendees with the exception of Germany, which had not been a signatory to the Treaty of Lausanne, and with reservations by Japan,[9] and came into force on 9 November 1936.[7]

Britain's willingness to make concessions has been attributed to a desire to avoid Turkey being driven to ally itself with, or fall under the influence of Adolf Hitler or Benito Mussolini.[10][11] It was thus the first in a series of steps by Britain and France to ensure that Turkey would either remain neutral or tilt towards the Western Allies in the event of any future conflict with the Axis.[7]

The International Straits Commission was abolished, authorising the full resumption of Turkish military control over the Straits and the refortification of the Dardanelles. Turkey was authorised to close the Straits to all foreign warships in wartime or when it was threatened by aggression; additionally, it was authorised to refuse transit from merchant ships belonging to countries at war with Turkey. A number of highly specific restrictions were imposed on what type of warships are allowed passage. Non-Black Sea state warships in the Straits must be under 15,000 tons. No more than nine non-Black Sea state warships, with a total aggregate tonnage of no more than 30,000 tons, may pass at any one time, and they are permitted to stay in the Black Sea for no longer than twenty-one days.

Although the treaty is often cited as prohibiting aircraft carriers in the straits,[12] there is no explicit prohibition on aircraft carriers in the treaty. However, the tonnage limits in Article 14, which apply to all non-Black Sea powers, would preclude the transit of modern aircraft carrying ships. In the case of non-Black Sea powers, these terms make it impossible for transit any modern ships carrying aircraft through the straits without violating the terms of the convention.

Under Article 12, Black Sea states are also allowed to send submarines through the Straits, with prior notice, as long as the vessels have been constructed, purchased or sent for repair outside the Black Sea. The less restrictive rules applicable to Black Sea states were agreed as, effectively, a concession to the Soviet Union, the only Black Sea state other than Turkey with any significant number of capital ships or submarines.[11][17] The passage of civil aircraft between the Mediterranean and Black Seas is permitted, but only along routes authorised by the Turkish government.[18]

The terms of the Convention were largely a reflection of the international situation in the mid-1930s. They largely served Turkish and Soviet interests, enabling Turkey to regain military control of the Straits and assuring Soviet dominance of the Black Sea.[18] Although the Convention restricted the Soviets' ability to send naval forces into the Mediterranean sea – thereby satisfying British concerns about Soviet intrusion into what was considered a British sphere of influence – it also ensured that outside powers could not exploit the Straits to threaten the Soviet Union. This was to have significant repercussions during World War II when the Montreux regime prevented the Axis powers from sending naval forces through the Straits to attack the Soviet Union[citation needed]. The Axis powers were thus severely limited in naval capability in their Black Sea campaigns, relying principally on small vessels that had been transported overland by rail and canal networks. Auxiliary vessels and armed merchant ships occupied a grey area, however, and the transit of such vessels through the straits led to friction between the Allies and Turkey. Repeated protests from Moscow and London led to the Turkish government banning the movements of "suspicious" Axis ships with effect from June 1944 after a number of German auxiliary ships were permitted to transit the Straits.[19][20]

Development of the Convention since 1936

The Convention remains in force today, with amendments, though not without dispute. It was repeatedly challenged by the Soviet Union during World War II and the Cold War. As early as 1939, Joseph Stalin sought to reopen the Straits Question and proposed joint Turkish and Soviet control of the Straits, complaining that "a small state [i.e. Turkey] supported by Great Britain held a great state by the throat and gave it no outlet."[21] After the Molotov–Ribbentrop Pact was signed by the Soviet Union and Nazi Germany, the Soviet Foreign Minister Vyacheslav Molotov informed his German counterparts that the USSR wished to take military control of the Straits and establish its own military base there.[22] The Soviets returned to the issue in 1945 and 1946, demanding a revision of the Montreux Convention at a conference excluding most of the Montreux signatories, a permanent Soviet military presence and joint control of the Straits. This was firmly rejected by Turkey, despite an ongoing Soviet "strategy of tension". For several years after World War II, the Soviets exploited the restriction on the number of foreign warships by ensuring that one of theirs was always in the Straits, thus effectively blocking any nation other than Turkey from sending warships through the Straits.[23] Soviet pressure expanded into full on demands to revise the Montreux Convention, which led to the Turkish Straits crisis of 1946, which led to Turkey abandoning its policy of neutrality. In 1947 it became the recipient of US military and economic assistance under the Truman Doctrine of "containment" and joined NATO, along with Greece, in 1952.[24]

The passage of US warships through the Straits also raised controversy, as the convention forbids the transit of non-Black Sea nations' warships with guns of a calibre larger than eight inches (203 mm). In the 1960s, the US sent warships carrying 305 mm calibre ASROC missiles through the Straits, prompting Soviet protests. The Turkish government rejected the Soviet complaints, pointing out that guided missiles were not guns and that such weapons had not even existed at the time of the Convention's agreement so were not restricted.[25]

The United Nations Convention on the Law of the Sea (UNCLOS), which entered into force in November 1994, has prompted calls for the Montreux Convention to be revised and adapted to make it compatible with UNCLOS's regime governing straits used for international navigation. However, Turkey's long-standing refusal to sign UNCLOS has meant that Montreux remains in force without further amendments.[26]

The safety of vessels passing through the Bosporus has become a major concern in recent years as the volume of traffic has increased greatly since the Convention was signed – from 4,500 in 1934 to 49,304 by 1998. As well as obvious environmental concerns, the Straits bisect the city of Istanbul with over 14 million people living on its shores; maritime incidents in the Straits therefore pose a considerable risk to public safety. The Convention does not, however, make any provision for the regulation of shipping for the purposes of safety and environmental protection. In January 1994 the Turkish government adopted new "Maritime Traffic Regulations for the Turkish Straits and the Marmara Region". This introduced a new regulatory regime "in order to ensure the safety of navigation, life and property and to protect the environment in the region" but without violating the Montreux principle of free passage. The new regulations provoked some controversy when Russia, Greece, Cyprus, Romania, Ukraine and Bulgaria raised objections. However, they were approved by the International Maritime Organisation on the grounds that they were not intended to prejudice "the rights of any ship using the Straits under international law". The regulations were revised in November 1998 to address Russian concerns.[27]