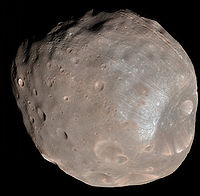 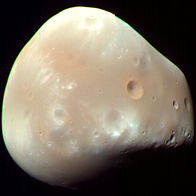 The moons of Mars are Phobos and Deimos.[1] Both moons were discovered in 1877 by Asaph Hall[2] and are named after the characters Phobos (panic/fear) and Deimos (terror/dread) who, in Greek mythology, accompanied their father Ares, god of war, into battle. Ares was known as Mars to the Romans. It is possible that Mars may have moons smaller than 50–100 meters and a dust ring between Phobos and Deimos, but none have been discovered.[3]

Curiosity's view of the Martian moons: Phobos passing in front of Deimos – in real-time (video-gif, 1 August 2013)

Perhaps inspired by Johannes Kepler (and quoting Kepler's third law of planetary motion), Jonathan Swift's satire Gulliver's Travels (1726) refers to two moons in Part 3, Chapter 3 (the "Voyage to Laputa"), in which Laputa's astronomers are described as having discovered two satellites of Mars orbiting at distances of 3 and 5 Martian diameters with periods of 10 and 21.5 hours. The actual orbital distances of Phobos and Deimos are 1.4 and 3.5 Martian diameters, and their respective orbital periods are 7.6 and 30.3 hours.[4][5] In the 20th century, V. G. Perminov, a spacecraft designer of early Soviet Mars and Venus spacecraft, speculated Swift found and deciphered records that Martians left on Earth.[6] However, the view of most astronomers is that Swift was simply employing a common argument of the time, that as the inner planets Venus and Mercury had no satellites, Earth had one and Jupiter had four (known at the time), that Mars by analogy must have two. Furthermore, as they had not yet been discovered, it was reasoned that they must be small and close to Mars. This would lead Swift to making a roughly accurate estimate of their orbital distances and revolution periods. In addition Swift could have been helped in his calculations by his friend, the mathematician John Arbuthnot [7]

Voltaire's 1750 short story "Micromégas", about an alien visitor to Earth, also refers to two moons of Mars. Voltaire was presumably influenced by Swift.[8][9] In recognition of these 'predictions', two craters on Deimos are named Swift and Voltaire.[citation needed]

Asaph Hall discovered Deimos on 12 August 1877 at about 07:48 UTC and Phobos on 18 August 1877, at the US Naval Observatory in Washington, D.C., at about 09:14 GMT (contemporary sources, using the pre-1925 astronomical convention that began the day at noon, give the time of discovery as 11 August 14:40 and 17 August 16:06 Washington mean time respectively).[10][11][12] At the time, he was deliberately searching for Martian moons. Hall had previously seen what appeared to be a Martian moon on 10 August, but due to bad weather, he could not definitively identify them until later.

Hall recorded his discovery of Phobos in his notebook as follows:[13] 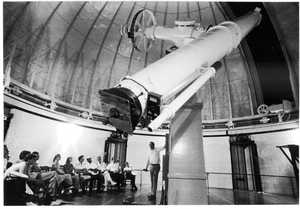 The telescope used to discover the Martian moons

"I repeated the examination in the early part of the night of 11th [August 1877], and again found nothing, but trying again some hours later I found a faint object on the following side and a little north of the planet. I had barely time to secure an observation of its position when fog from the River stopped the work. This was at half past two o'clock on the night of the 11th. Cloudy weather intervened for several days.
"On 15 August the weather looking more promising, I slept at the Observatory. The sky cleared off with a thunderstorm at 11 o'clock and the search was resumed. The atmosphere however was in a very bad condition and Mars was so blazing and unsteady that nothing could be seen of the object, which we now know was at that time so near the planet as to be invisible.
"On 16 August the object was found again on the following side of the planet, and the observations of that night showed that it was moving with the planet, and if a satellite, was near one of its elongations. Until this time I had said nothing to anyone at the Observatory of my search for a satellite of Mars, but on leaving the observatory after these observations of the 16th, at about three o'clock in the morning, I told my assistant, George Anderson, to whom I had shown the object, that I thought I had discovered a satellite of Mars. I told him also to keep quiet as I did not wish anything said until the matter was beyond doubt. He said nothing, but the thing was too good to keep and I let it out myself. On 17 August between one and two o'clock, while I was reducing my observations, Professor Newcomb came into my room to eat his lunch and I showed him my measures of the faint object near Mars which proved that it was moving with the planet.
"On 17 August while waiting and watching for the outer moon, the inner one was discovered. The observations of the 17th and 18th put beyond doubt the character of these objects and the discovery was publicly announced by Admiral Rodgers."

The telescope used for the discovery was the 26-inch (66 cm) refractor (telescope with a lens) then located at Foggy Bottom.[14] In 1893 the lens was remounted and put in a new dome, where it remains into 21st century.[15]

The names, originally spelled Phobus and Deimus, respectively, were suggested by Henry Madan (1838–1901), Science Master of Eton, from Book XV of the Iliad, where Ares summons Fear and Fright.[16]

In 1959, Walter Scott Houston perpetrated a celebrated April Fool's hoax in the April edition of the Great Plains Observer, claiming that "Dr. Arthur Hayall of the University of the Sierras reports that the moons of Mars are actually artificial satellites". Both Dr. Hayall and the University of the Sierras were fictitious. The hoax gained worldwide attention when Houston's claim was repeated, apparently in earnest, by a Soviet scientist, Iosif Shklovsky.[17]

Searches have been conducted for additional satellites. Most recently, Scott S. Sheppard and David C. Jewitt surveyed the Hill sphere of Mars for irregular satellites. The search covered nearly the entire Hill sphere, but scattered light from Mars excluded the inner few arcminutes where the satellites Phobos and Deimos reside. No new satellites were found to an apparent limiting red magnitude of 23.5, which corresponds to radii of about 0.09 km using an albedo of 0.07.[18] 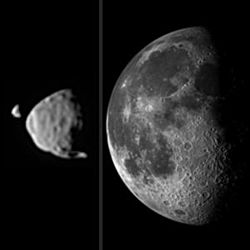 Apparent sizes of the moons of Mars, Deimos and Phobos, and the Moon as viewed from the surface of their respective planets (Curiosity rover, 1 August 2013)

If viewed from Mars's surface near its equator, full Phobos looks about one third as big as a full moon on Earth. It has an angular diameter of between 8' (rising) and 12' (overhead). It would look smaller when the observer is further away from the Martian equator, and is completely invisible (always beyond the horizon) from Mars's polar ice caps. Deimos looks more like a bright star or planet for an observer on Mars, only slightly bigger than Venus looks from Earth; it has an angular diameter of about 2'. The Sun's angular diameter as seen from Mars, by contrast, is about 21'. Thus there are no total solar eclipses on Mars, as the moons are far too small to completely cover the Sun. On the other hand, total lunar eclipses of Phobos are very common, happening almost every night.[19]

The motions of Phobos and Deimos would appear very different from that of our own Moon. Speedy Phobos rises in the west, sets in the east, and rises again in just eleven hours, while Deimos, being only just outside synchronous orbit, rises as expected in the east but very slowly. Despite its 30 hour orbit, it takes 2.7 days to set in the west as it slowly falls behind the rotation of Mars.

Both moons are tidally locked, always presenting the same face towards Mars. Since Phobos orbits Mars faster than the planet itself rotates, tidal forces are slowly but steadily decreasing its orbital radius. At some point in the future, when it approaches Mars closely enough (see Roche limit), Phobos will be broken up by these tidal forces.[20] Several strings of craters on the Martian surface, inclined further from the equator the older they are, suggest that there may have been other small moons that suffered the fate expected of Phobos, and that the Martian crust as a whole shifted between these events.[21] Deimos, on the other hand, is far enough away that its orbit is being slowly boosted instead,[22] as in the case of our own Moon.

Animation illustrating the asteroid-belt origin for the moons

The origin of the Martian moons is still controversial.[23] Phobos and Deimos both have much in common with carbonaceous C-type asteroids, with spectra, albedo, and density very similar to those of C- or D-type asteroids.[24] Based on their similarity, one hypothesis is that both moons may be captured main-belt asteroids.[5][25] Both moons have very circular orbits which lie almost exactly in Mars's equatorial plane, and hence a capture origin requires a mechanism for circularizing the initially highly eccentric orbit, and adjusting its inclination into the equatorial plane, most probably by a combination of atmospheric drag and tidal forces,[26] although it is not clear that sufficient time is available for this to occur for Deimos.[23] Capture also requires dissipation of energy. The current atmosphere of Mars is too thin to capture a Phobos-sized object by atmospheric braking.[23] Geoffrey Landis has pointed out that the capture could have occurred if the original body was a binary asteroid that separated under tidal forces.[25]

Phobos could be a second-generation Solar System object that coalesced in orbit after Mars formed, rather than forming concurrently out of the same birth cloud as Mars.[27]

Another hypothesis is that Mars was once surrounded by many Phobos- and Deimos-sized bodies, perhaps ejected into orbit around it by a collision with a large planetesimal.[28] The high porosity of the interior of Phobos (based on the density of 1.88 g/cm3, voids are estimated to comprise 25 to 35 percent of Phobos' volume) is inconsistent with an asteroidal origin.[29] Observations of Phobos in the thermal infrared suggest a composition containing mainly phyllosilicates, which are well known from the surface of Mars. The spectra are distinct from those of all classes of chondrite meteorites, again pointing away from an asteroidal origin.[30] Both sets of findings support an origin of Phobos from material ejected by an impact on Mars that reaccreted in Martian orbit,[31] similar to the prevailing theory for the origin of Earth's moon.

While many Martian probes provided images and other data about Phobos and Deimos, only few were dedicated to these satellites and intended to perform a flyby or landing on the surface.

Two probes under the Soviet Phobos program were successfully launched in 1988, but neither conducted the intended jumping landings on Phobos and Deimos due to failures (although Phobos 2 successfully photographed Phobos). The post-Soviet Russian Fobos-Grunt probe was intended to be the first sample return mission from Phobos, but a rocket failure left it stranded in Earth orbit in 2011.

In 1997 and 1998, the Aladdin mission was selected as a finalist in the NASA Discovery Program. The plan was to visit both Phobos and Deimos, and launch projectiles at the satellites. The probe would collect the ejecta as it performed a slow flyby. These samples would be returned to Earth for study three years later. Ultimately, NASA rejected this proposal in favor of MESSENGER, a probe to Mercury.

In 2007, the European Space Agency and EADS Astrium proposed and developed a mission to Phobos in 2016 with a lander and sample return, but this mission was never flown. Since 2007 the Canadian Space Agency has been considering the PRIME mission to Phobos with orbiter and lander. Since 2008 NASA Glenn Research Center began studying a Phobos and Deimos sample return mission. Since 2013 NASA developed Phobos Surveyor mission with orbiter and small rover that is planned to launch after 2023. Proposed NASA's PADME mission plans to launch in 2020 and reach Mars orbit in 2021 to conduct multiple flybys of the Martian moons. Also NASA plans OSIRIS-REx 2 mission for sample return from Moons of Mars. Another sample return mission from Deimos called Gulliver has been conceptualized. Russia plans to repeat Fobos-Grunt mission near 2024. 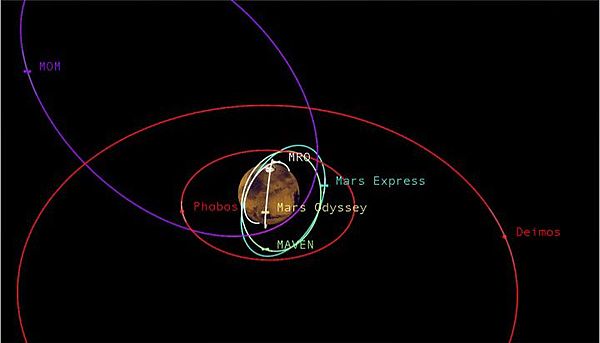