Moshe Safdie, CC, FAIA (born July 14, 1938) is an Israeli/Canadian/American architect, urban designer, educator, theorist, and author. He is most identified with Habitat 67, which paved the way for his international career.[1]

Moshe Safdie was born in Haifa, Israel to a Syrian Jewish family. His family moved to Montreal, Canada, in 1953. In 1959, Safdie married Nina Nusynowicz. The couple had two children, a daughter and a son. His son Oren Safdie is a playwright who has written several plays about architecture including Private Jokes, Public Places.[2] His daughter Taal is an architect in San Diego, a partner of the firm Safdie Rabines Architects.[3] In 1961, Safdie graduated from McGill University with a degree in architecture. In 1981, Safdie married Michal Ronnen, a photographer, with whom he has two daughters, Carmelle and Yasmin. Carmelle Safdie is an artist, and Yasmin Safdie is a social worker. Safdie is the uncle of Dov Charney, founder and former CEO of American Apparel.

After apprenticing with Louis Kahn in Philadelphia, Safdie returned to Montreal to oversee the master plan for Expo 67. In 1964, he established his own firm to undertake Habitat 67, an adaptation of his McGill thesis. Habitat 67, which pioneered the design and implementation of three-dimensional, prefabricated units for living, was a central feature of Expo 67 and an important development in architectural history. He was awarded the 1967 Construction Man of the Year Award from the Engineering News Record and the Massey Medal for Architecture in Canada for Habitat 67.[4]

In 1970, Safdie opened a branch office in Jerusalem. Among the projects he has designed in Jerusalem are Yad Vashem and the Alrov Mamilla Quarter, which includes the Mamilla Mall, David's Village luxury condominiums, and the 5-star Mamilla Hotel. In 1978, after teaching at McGill, Ben Gurion, and Yale universities, Safdie moved his main office to Boston and became director of the Urban Design Program at Harvard University's Graduate School of Design, until 1984. From 1984 to 1989, he was the Ian Woodner Professor of Architecture and Urban Design at Harvard. Since the early 1990s, Safdie, a citizen of Canada, Israel, and the United States, has focused on his architectural practice, Safdie Architects, which is based in Somerville, MA, and has branches in Toronto, Jerusalem, and Singapore. Safdie has designed six of Canada's principal public institutions--including the National Gallery of Canada in Ottawa, and Vancouver Library Square--as well as many other notable projects around the world, including the Salt Lake City Main Public Library; the Khalsa Heritage Centre in Punjab, India; the Marina Bay Sands integrated resort in Singapore; the United States Institute of Peace Headquarters in Washington, DC; the Kauffman Center for the Performing Arts in Kansas City, Missouri; and the Crystal Bridges Museum of American Art in Bentonville, Arkansas.

Moshe Safdie's works are known for their dramatic curves, arrays of geometric patterns, use of windows, and key placement of open and green spaces. His writings and designs stress the need to create meaningful, vital, and inclusive spaces that enhance community, with special attention to the essence of a particular locale, geography, and culture.

He is a self-described modernist.

In November 2011, Punjab Chief Minister honoured Safdie at the inauguration ceremony of the Khalsa Heritage Museum. He said Safdie had studied Sikh religion for two years before designing the heritage museum. Safdie said he wanted the museum to look 300 years old and he thought he had succeeded in this objective. 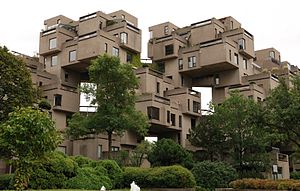 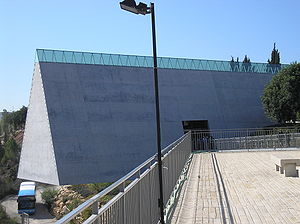 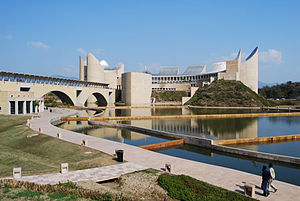