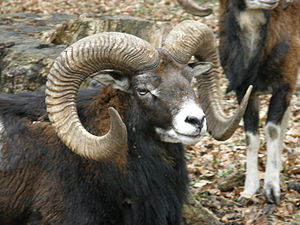 A European mouflon male in the German forest

Mouflon have red-brown, short-haired coats with dark back-stripes and light-colored saddle patches. The males are horned; some females are horned, while others are polled. The horns of mature rams are curved in almost one full revolution (up to 85 cm). Mouflon have shoulder heights of about 0.9 m and body weights of 50 kg (males) and 35 kg (females).[4] 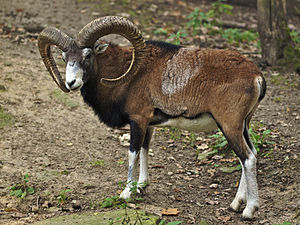 Today, mouflon inhabit the Caucasus, Anatolia, northern and eastern Iraq, and northwestern Iran and Armenia. The range originally stretched further to the Crimean peninsula and the Balkans, where they had already disappeared 3,000 years ago and came back to Bulgaria. Mouflon were introduced to the islands of Corsica, Sardinia, Rhodes, and Cyprus during the neolithic period, perhaps as feral domesticated animals, where they have naturalized in the mountainous interiors of these islands over the past few thousand years, giving rise to the subspecies known as European mouflon (O. aries musimon).

On the island of Cyprus, the mouflon or agrino became a different and endemic subspecies only found there, the Cyprus mouflon (O. o. ophion). The Cyprus mouflon population contains only about 3,000 animals. They are now rare on the islands, but are classified as feral animals by the IUCN.[5] They were later successfully introduced into continental Europe, including Portugal, Spain, France, Germany, central Italy, Switzerland, Austria, the Netherlands, Belgium, the Czech Republic, Poland, Slovakia, Slovenia, Hungary, Bulgaria, Romania, the Canary Islands, and even some northern European countries such as Denmark, Sweden and Finland.

A small colony exists in the remote Kerguelen Islands in the southern Indian Ocean, and on the Veliki Brijun Island in the Brijuni Archipelago of the Istrian Peninsula in Croatia. In South America, mouflon have been introduced into central Chile and Argentina.[6] Since the 1980s, they have also been successfully introduced to game ranches in North America for the purpose of hunting; however, on game ranches, purebreds are rare, as mouflon interbreed with domestic sheep and bighorn sheep.[citation needed] Mouflon have been introduced as game animals into Spieden Island in Washington state, and into the Hawaiian islands of Lanai and Hawaii where they have become a problematic invasive species. A small population escaped from an animal enclosure owned by Thomas Watson, Jr. on the island of North Haven, Maine in the 1990s and still survives there.

Their normal habitats are steep mountainous woods near tree lines. In winter, they migrate to lower altitudes.[4] 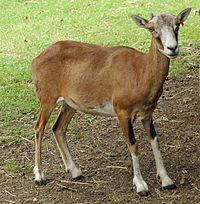 The scientific classification of the mouflon is disputed.[7] Five subspecies of mouflon are distinguished by MSW3:[1]

A mouflon was cloned successfully in early 2001 and lived at least seven months, making it the first clone of an endangered mammal to survive beyond infancy.[8][9][10] This demonstrated a common species (in this case, a domestic sheep) can successfully become a surrogate for the birth of an exotic animal such as the mouflon. If cloning of the mouflon can proceed successfully, it has the potential to reduce strain on the number of living specimens.

Mouflon rams have a strict dominance hierarchy. Before mating season or "rut", which is from late autumn to early winter, rams try to create a dominance hierarchy to determine access to ewes (female mouflon) for mating. Mouflon rams fight one another to obtain dominance and win an opportunity to mate with females. Mouflons reach sexual maturity at the age of 2 to 4 years. Young rams need to obtain dominance before they get a chance to mate, which takes another 3 years for them to start mating. Mouflon ewes also go through a similar hierarchy process in terms of social status in the first 2 years, but can breed even at low status. Pregnancy in females lasts 5 months, in which they produce 1 to 2 offspring.