Moundville Archaeological Site, also known as the Moundville Archaeological Park, is a Mississippian culture site on the Black Warrior River in Hale County, near the city of Tuscaloosa, Alabama.[3] Extensive archaeological investigation has shown that the site was the political and ceremonial center of a regionally organized Mississippian culture chiefdom polity between the 11th and 16th centuries. The archaeological park portion of the site is administered by the University of Alabama Museums and encompasses 185 acres (75 ha), consisting of 29 platform mounds around a rectangular plaza.[3] The site was declared a National Historic Landmark in 1964 and was added to the National Register of Historic Places in 1966.[2]

Bottle Creek Indian Mounds, located on an island north of Mobile, is another major Mississippian site in Alabama on the Gulf Coast. It has also been designated as an NHL. 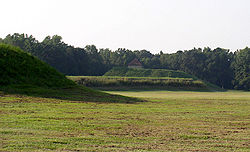 A view across the plaza from mound J to mound B, with mound A in the center.

The site was occupied by Native Americans of the Mississippian culture from around 1000 AD to 1450 AD.[3] Around 1150 AD it began its rise from a local to a regional center. At its height, the community took the form of a roughly 300-acre (121 ha) residential and political area protected on three sides by a bastioned wooden palisade wall, with the remaining side protected by the river bluff.[3]

The largest platform mounds are located on the northern edge of the plaza and become increasingly smaller going either clockwise or counter clockwise around the plaza to the south. Scholars theorize that the highest-ranking clans occupied the large northern mounds, with the smaller mounds' supporting buildings used for residences, mortuary, and other purposes. A total of 29 remain on the site.[3] Of the two largest mounds in the group, Mound A occupies a central position in the great plaza, and Mound B lies just to the north, a steep, 58 feet (18 m) tall pyramidal mound with two access ramps.[3] Along with both mounds, archaeologists have also found evidence of borrow pits, other public buildings, and a dozen small houses constructed of pole and thatch.

Archaeologists have interpreted this community plan as a sociogram, an architectural depiction of a social order based on ranked clans. According to this model, the Moundville community was segmented into a variety of different clan precincts, the ranked position of which was represented in the size and arrangement of paired earthen mounds around the central plaza. By 1300, the site was being used more as a religious and political center than as a residential town.[3] This signaled the beginning of a decline, and by 1500 most of the area was abandoned.[3] 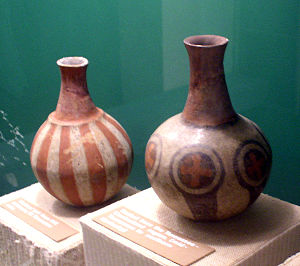 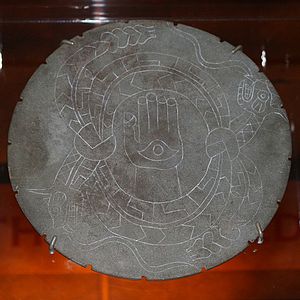 The surrounding area appears to have been heavily populated, but the people built relatively few mounds before 1200 AD, after which the public architecture of the plaza and mounds was constructed.[3] At its height, the population is estimated to have been around 1000 people within the walls, with 10,000 additional people in the surrounding countryside.[3] Based on findings during excavations, the residents of the site were skilled in agriculture, especially the cultivation of maize. Production of maize surpluses gave the people produce to trade for other goods, supported population density, and allowed the specialization of artisans.[3] Extensive amounts of imported luxury goods, such as copper, mica, galena, and marine shell, have been excavated from the site.[3] The site is renowned by scholars for the artistic excellence of the artifacts of pottery, stonework, and embossed copper left by the former residents.[3]

The first major excavations were done in 1905-06 by Clarence Bloomfield Moore, an independent archeologist, before archaeology had become a professional field of scholarship. His work first brought the site national attention and contributed to archaeologists developing the concept of the Southeastern Ceremonial Complex.[5] One of his many discoveries was a finely carved diorite bowl depicting a crested wood duck, which he later donated to the Smithsonian Institution, together with more than 500 other pieces.[5]

Although the state had shown little interest in the site, after Moore removed this and many other of the site's finest artifacts, the Alabama Legislature prohibited people from taking any other artifacts from the state. Archaeological techniques in general were relatively crude when compared to modern standards, but some professionals even during his time criticized Moore for his excavation techniques.[5]

The first large-scale scientific excavations of the site began in 1929 by Walter B. Jones, director of the Alabama Museum of Natural History, and the archaeologist David L. DeJarnette.[6] During the 1930s, he used some workers from the Civilian Conservation Corps, a program of the President Franklin D. Roosevelt administration during the Great Depression.

In the early 21st century, work is led by Dr. Jim Knight, Curator of Southeastern Archaeology at the University of Alabama. He is conducting field research at Moundville with an emphasis on ethnohistorical reconstruction. A ceremonial "earth lodge." was discovered in 2007, and about 15 percent of the site has been excavated.[7] The Jones Archaeological Museum was constructed on the park property, and opened in 2010 for display of artifacts collected at the site and interpretation of the ancient people and culture. The University of Alabama maintains an archaeological lab at the park as well.

Two major varieties of pottery are associated with the Moundville Site. The Hemphill style pottery is a locally produced ware with a distinctive engraving tradition. The other variety consists of painted vessels, many of which were not produced locally. Unlike the engraved pottery, the negative-painted pottery seems to have been used only by the elites at the Moundville site; it has not been found outside the site.[8]

The Moundville Archaeological Site is located on a bluff overlooking the Black Warrior River. The site and other affiliated settlements are located within a portion of the Black Warrior River Valley starting below the fall line, just south of Tuscaloosa, Alabama, and extending 25 miles (40 km) downriver. Below the fall line, the valley widens and the uplands consist of rolling hills dissected by intermittent streams. This region corresponds with the transition between the Piedmont and Coastal Plain and encompasses considerable physiographic and ecological diversity. Environmentally this portion of the Black Warrior Valley was an ecotone that had floral and faunal characteristics from temperate oak-hickory, maritime magnolia, and pine forests.

The American independent film, A Genesis Found (2009), was largely shot and set at the Moundville Archaeological Site. The plot concerns a search for a supposed anomalous skeleton linked to the site's founding. It features a dramatized dig from a University of Alabama Field School. The film also features dramatizations of Civilian Conservation Corps digs in the 1930s, as well as details about some of the site's more popular motifs and imagery.[citation needed] 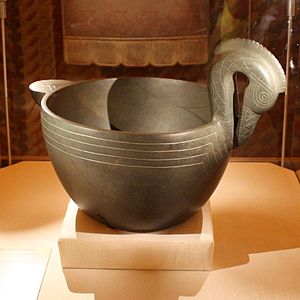 The carved diorite bowl from the site depicts a crested wood duck. It is now displayed at the Jones Archaeological Museum on-site, on loan from the Smithsonian Institution's National Museum of the American Indian since May 2010.