Mt. Lebanon is a home rule municipality, formerly a township, in Allegheny County, Pennsylvania, United States. The population was 33,137 at the 2010 census.

An affluent suburb of nearby Pittsburgh, Mt. Lebanon is well known locally and nationally for its school district.

Established in 1912 as "Mount Lebanon," the community's official name was changed to "Mt. Lebanon" when its home rule charter took effect in 1975.

The first settlers arrived in 1773-1774, having purchased the land from the descendants of William Penn; other pioneers soon bought land from the state government.

In 1912, Mount Lebanon Township was incorporated as a "First Class Township" under Pennsylvania state law. It had formerly been a part of Scott Township, which in turn traces its origins to the long-defunct St. Clair Township. Mount Lebanon was not named for two Cedar of Lebanon trees that were planted in 1850 on Washington Road near the top of Bower Hill Road, but was named after the area from which they came, Mount Lebanon, due to the similarities between the two landscapes.[2] Prior to the incorporation of the township, the "Mount Lebanon" name was used for the area of Upper St. Clair Township near the cedar trees. In the 1880s, a post office located near the transplanted cedar trees was named "Mount Lebanon". Incorporators of neighboring Dormont Borough initially tried to use the "Mount Lebanon" name in 1909, but were opposed by residents of the future Mount Lebanon Township.

In 1928, Mount Lebanon became the first First Class township in Pennsylvania to adopt the council-manager form of government and has had an appointed manager serving as the chief administrative officer since that time.

Mount Lebanon was a farming community until the arrival of streetcar lines, the first line to Pittsburgh opening on July 1, 1901[3] followed by a second in 1924. After the arrival of the streetcar lines, which enabled daily commuting to and from Downtown Pittsburgh, Mount Lebanon became a streetcar suburb, with the first real estate subdivision being laid out in November 1901. Further, the opening of the Liberty Tubes in 1924 allowed easy automobile access to Pittsburgh. Between the 1920 and 1930 censuses, the township's population skyrocketed from 2,258 to 13,403. Today, Pittsburgh's mass transit agency, the Port Authority of Allegheny County, or "PATransit," operates a light rail system whose Red Line, which runs underneath Uptown Mt. Lebanon through the Mt. Lebanon Tunnel, merges with the 47L line in Pittsburgh's Mt. Washington section. Mt. Lebanon's only platform station, Mt. Lebanon Station, is in Uptown Mt. Lebanon; the adjacent Dormont Junction and Castle Shannon stations are in neighboring municipalities. And as of the census[4] of 2000, there were 33,017 people living in Mt. Lebanon.

In 1971, Muhammad Ali attempted to purchase a home in Virginia Manor, but racial discrimination prevented him from doing so.[5]

On May 21, 1974, the electorate approved a Home Rule Charter, which took effect on January 1, 1975;[6] as such, the community is no longer governed under the provisions of the Pennsylvania Township Code. Mount Lebanon became one of the first municipalities in Pennsylvania to adopt a home rule charter.[7] In the charter, the official name of the municipality became Mt. Lebanon, Pennsylvania; the word "Mount" is abbreviated in all government documents, although the U.S. Postal Service continues to use "Mount." File:St Claire Hospital Mt Lebanon jeh.JPG

The subdivision of Carelton Hills won a national liveability award in 1974.[8]

Mt. Lebanon is a suburb of Pittsburgh 7 miles (11 km) south of the city's downtown. There are two small borders with Pittsburgh neighborhoods to the northeast (Brookline) and north (Banksville). The remainder of the northeast border is with the borough of Dormont. The entire western border is with Scott Township. To the south are the two towns which, due to their comparable size and affluence, are most often compared with Mt. Lebanon: Upper St. Clair to the southwest and Bethel Park to the southeast. To the east is Castle Shannon, and finally, to the east-northeast is Baldwin Township (not to be confused with the Borough of Baldwin). 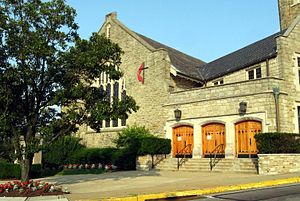 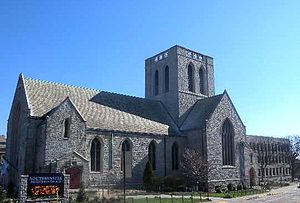 There are sizable business districts along the borders with Upper St. Clair and Castle Shannon, as well. 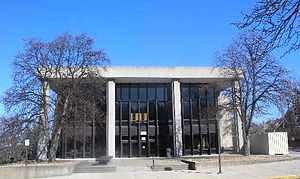 The Mt. Lebanon Public Library, founded in 1932, is funded almost entirely by the municipality and county. Its home is a $4.2 million building, with shelves for 140,000 books, seats for 165 persons, and more than 50 public computers. When the building opened in 1997, it won an architectural design award and was featured in the architectural issue of Library Journal. Circulation is 563,000 items/year, and attendance averages 111 per hour.[18]

St. Bernard school, a private Catholic school in the Diocese of Pittsburgh, is located in Mt. Lebanon. 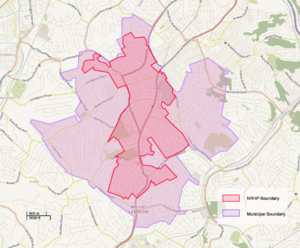 A large portion of Mt. Lebanon was listed as the Mt. Lebanon Historic District on the National Register of Historic Places in 2014. The district contains 3,341 contributing buildings and 21 contributing sites. Most of the buildings (89%) are residential, though two commercial areas are included.[19]

The district is a significant example of the transition from a rural agricultural area to a suburb made possible first by the trolley/streetcar, c. 1901, and later by the automobile in the 1920s and 1930s with the opening of the Liberty Tubes in 1924. The boundaries of the district include those areas that were developed between 1874 and c. 1945.[19]

Mt. Lebanon provides many recreational opportunities for its residents. Fifteen parks are scattered over 200 acres (0.81 km2) throughout the community. In addition to the parks, there is an Olympic size swimming pool, open in summer, and a regulation size ice rink and recreation building located adjacent to Mt. Lebanon Park on Cedar Blvd. Mt. Lebanon also boasts one of the oldest public golf courses in western Pennsylvania and has several tennis and basketball courts which are open year round. Other recreational facilities include a Sand volleyball court, bocce courts, platform tennis, a plethora of picnic pavilions and over eight children's playgrounds.[20] Mt. Lebanon School District's sports teams are a big part of the community. The mascot is currently the Blue Devil, which has occasionally stirred controversy.[21]