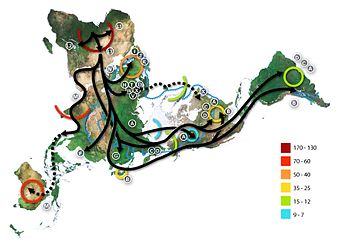 Hypothesized world map of human migrations, with the North Pole at center. Africa, harboring the start of the migration, is at the top left and South America at the far right. Migration patterns are based on studies of mitochondrial (matrilinear) DNA. Letters represent haplogroups while colors and numbers represent thousands of years before present.
File:Peopling of eurasia.jpg
Suggested migratory route of the "Out of Africa" migration according to Mitochondrial DNA

In human genetics, a human mitochondrial DNA haplogroup is a haplogroup defined by differences in human mitochondrial DNA. Haplogroups are used to represent the major branch points on the mitochondrial phylogenetic tree. Understanding the evolutionary path of the female lineage has helped population geneticists trace the matrilineal inheritance of modern humans back to human origins in Africa and the subsequent spread around the globe.

The letter names of the haplogroups (not just mitochondrial DNA haplogroups) run from A to Z. As haplogroups were named in the order of their discovery, they (meaning the accidental dictionary ordering of the letters) do not reflect the actual genetic relationships.

The hypothetical woman at the root of all these groups (meaning just the mitochondrial DNA haplogroups) is the matrilineal most recent common ancestor (MRCA) for all currently living humans. She is commonly called Mitochondrial Eve.

This phylogenetic tree is based on the Van Oven 2009 tree[1] and subsequent published research.

While Bryan Sykes claimed there were seven "daughters" – or major mitochondrial lineages – among modern Europeans, other scientists now put the number at 10–12. The additional "daughters" are generally said to include haplogroups I, M and W. A 2012 paper suggested that the haplogroups most common in modern European populations were: H, J, K, N1, T, U4, U5, V, X and W.[2]

Since a single mutation may define a haplogroup, the total number of " European mtDNA haplogroups" – even if they are defined only as those mentioned above and their descendant clades – is ultimately subjective, could theoretically number in the millions, and be continually increasing.