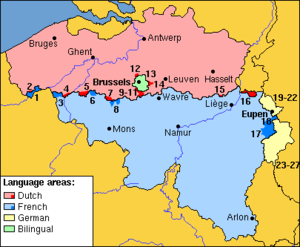 There were three language areas as from the 31 July 1921, law: the Dutch-speaking Flemish area, the French-speaking Walloon area, and the bilingual area of Brussels (capital city). These language areas of 1921 actually had no institutional translation in the structure of the Belgian state, then still constitutionally divided into provinces and municipalities. Thence a French-speaking unilingual municipality could, for instance, be part of the province of West Flanders.

The Belgian law of 28 June 1932, on the use of languages for administrative matters based the language status of every Belgian municipality on the decennial census that included, since 1846, several language questions about the knowledge as well as the day-to-day practice.[2] The criterion to belong to the Flemish- or Walloon-language area was the a threshold of 50%; whereas with a threshold of 30% the municipal authorities had to offer services in the minority language as well.[2] A municipality could ask the government to change its linguistic status by a royal decree only after a census showed a passage over the 30% or 50% threshold.

The 1932 law was implemented only once, as the invasion of Belgium by Nazi Germany in 1940 prevented the organization of the decennial census, which was organized in 1947 and applied only on 2 July 1954, when an ad hoc law modifying the law of 28 June 1932 on the use of languages for administrative matters transferred three previously unilingual Flemish municipalities with language facilities to the French-speaking minority (Evere, Ganshoren and Sint-Agatha-Berchem) to the bilingual region of Brussels, thus and introduced language facilities for the French-speaking minority in four previously unilingual Flemish municipalities (Drogenbos, Kraainem, Wemmel and Linkebeek).

The situation around Brussels (in the rim municipalities, see below) differs from the situation along the border between Flanders and Wallonia, and between the German- and French-speaking areas in Wallonia, where certain municipalities have had linguistic minorities for several centuries. The language border appears quite stable and peaceful, except for the municipalities of Voeren (French: Fourons) and, to a much lesser extent, Mouscron (Dutch: Moeskroen) and Comines-Warneton (Dutch: Komen-Waasten).

In the early 1990s, a revision of the Belgian Constitution made it more difficult to change the language status of the concerned municipalities by requiring that any such change had to gain a majority in each of the two language groups in the House of Representatives and the Senate. Previously, an overall majority would have been enough, which could have in theory allowed a near unanimity of Flemish representatives to impose an abolition of the facilities against the unanimous wish of the French-speaking representatives. This revision of the Constitution was widely seen by French speakers as a recognition that language facilities had a permanent status.

Currently, both Dutch and French speakers complain about poor or absent respect by certain authorities for their linguistic rights. Belgian and European courts are frequently solicited to arbitrate. Related political debates often take place in the various Belgian assemblies i.e. the federal, regional and community Parliaments.

In accordance with Article 6 of the Act on linguistic arrangements in educational matters promulgated on 30 July 1963 [3] and Article 3 of the Royal Decree of 14 March 1960 (implementing Article 4 of the law of 29 May 1959 to which it refers):[4] nursery and primary education may be organised in another national language than the official language of the linguistic area under the condition that:

Since the 1988 reform which transferred educational matters from the federal government's level to the Communities’ level, the hosting Community is responsibility to finance schools that meet the above criteria. However, the finances come from a special federal fund, which is shared between Communities according to the number of schools/pupils they respectively have in charge under the above legal arrangements. Annual subvention: nearly 10 million Euros.

In conformity with the above legal arrangements:

Apart from the above, there are also:

The language facilities are regulated by the Belgian laws promulgated on 8 November 1962 and 2 August 1963. The administration of municipalities with facilities is internally monolingual (the administration works in one language) and externally bilingual (it communicate with the population in two languages). Until the 1990s, these laws were implemented in addressing the local residents in their own respective languages and in publishing public notices in both languages.[citation needed]

In the late 1990s, two Flemish ministers (Leo Peeters and Luc Vandenbrande) proposed a stricter interpretation of the above laws and instructed the Flemish municipalities with facilities for the French speakers to send all documents only in Dutch and to provide a French translated version only to people who would place an individual formal request which should be renewed for every document. These instructions sharpened the practice until then condoned by the Permanent Commission for Language Control, a joint commission set up by the law to control the correct application of the language laws in Belgium.

French speakers asked the Council of Europe to advice on the general situation of protection of national minorities in Belgium and sued, in Belgium, the Flemish Region to restore the previous practice. In 2002, after having sent various representatives to investigate the situation,[11] the Parliamentary Assembly of the Council of Europe adopted Resolution 1301 (2002) on Protection of minorities in Belgium supporting French speakers' claim to be recognised as a "national minority" in the Flemish region, like Dutch speakers and German speakers in Wallonia.[12] However, this assembly, contrary to the Belgian and regional legislators and the Belgian and European judiciary, has no legal competency in these matters, only a moral one. With regard to the case opened in Belgium: in 2004, in a rare case of disavowing the recommendation of its Auditor, the 12th Flemish Chamber of the Council of State judged that the Flemish interpretation of the linguistic laws did not contradict the aforementioned laws. French speakers have generally considered that this ruling was politically motivated and legally unsound; and have kept demanding that the Flemish interpretation of linguistic laws be softened and that Belgium ratifies the Framework Convention for the Protection of National Minorities as per the Council of Europe's recommendations (a demand presently blocked by most Flemish political parties).

Until now, neither the French-speaking authorities nor the German-speaking authorities have taken any formal step to restrict language facilities in a similar way for the Dutch/French/German speakers living in Walloon municipalities with language facilities. However, in 2005 the Flemish newspaper De Tijd pointed out that the documents sent to the residents of the Walloon municipality of Enghien were generally written only in French while including just a small note in Dutch asking the receiver to inform whether he/she wished to get a Dutch copy.[13] Since then, the municipality has corrected this practice.

Belgian courts are extremely reluctant to arbitrate in all matters related to the linguistic and ethnic rights of the various ethnic and language groups in Belgium.

Over time, Flemings have become dissatisfied by the continued and growing presence of French speakers in the "rim" municipalities around Brussels. As a result, there is now a strong and growing reaction in Flanders demanding that the current language facilities should be phased out, especially for the recent 'migrants' around Brussels. For the facilities in the municipalities with historic minorities on the Walloon–Flemish border, there is still a willingness to consider maintaining them on condition of reciprocity (that these facilities are also properly implemented in Wallonia).

French speakers want to maintain all current facilities in Flanders, the more militant wing wanting to extend them in scope and/or area. French-speaking political parties, especially, protested against the Flemish ministerial circular letters from the socialist minister Leo Peeters (see supra). These circular letters, various additional restrictions put on the use of French in those municipalities, and the claims made by more and more Flemish politicians for the abolition of the facilities have caused a radicalisation of part of the French speakers, many of whom now think their linguistic rights would be better protected if the "rim" municipalities joined the bilingual Brussels-Capital Region. At the same time, French speakers from the civil society like Professor Philippe Van Parijs and French speakers among the members of the Brussels Enterprises Commerce and Industry association (BECI) made proposals meant at addressing these issues (among others) while addressing at the same time Flemish concerns and demand for respect of the Flemish 'principle of territoriality': 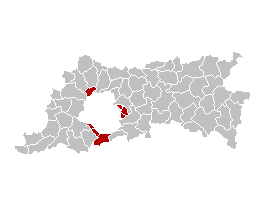 The municipalities with language facilities near Brussels

Wezembeek-Oppem and Kraainem are sometimes referred to as the oostrand (eastern rim). A survey published in Le Soir on 14 February 2005, indicated that in all six rim municipalities, the majority of the population was French-speaking (the study was unofficial, since the public authorities refuse to undertake a census). More precisely, the survey claimed that the French-speaking population amounts to 55% of the population in Drogenbos, 78% in Kraainem, 79% in Linkebeek, 54% in Wemmel, 72% in Wezembeek-Oppem, and 58% in Sint-Genesius-Rode.

Although Sint-Genesius-Rode also borders Wallonia, it is considered a rim municipality rather than a border municipality.

All municipalities in the German-language region have French-language facilities: