Popular New Zealand music has been influenced by blues, jazz, country, rock and roll and hip hop, with many of these genres given a unique New Zealand interpretation.[1][2] A number of popular artists have gone on to achieve international success including Lorde,[3] Split Enz, Crowded House, OMC, Bic Runga, Kimbra, Ladyhawke, The Naked and Famous, Fat Freddy's Drop, Savage, Flight of the Conchords, and Brooke Fraser.

Pre-Colonial Māori singing was microtonal, with a repeated melodic line that did not move far from a central note. Group singing was in unison or doubled in octaves. With origins in ancient South-East Asian cultures, the sound of these chants was described by early European settlers as "monotonous" and "doleful".[15]

Pre-Colonial instrumental music was played on taonga pūoro, a variety of blown, struck and twirled instruments made out of hollowed-out wood, stone, whale ivory, albatross bone, and human bone.[16] The pūkāea (wooden trumpet), hue (gourd), and pūtātara (conch shell trumpet) fulfilled many functions within pre-colonial Māori society, including a call to arms, dawning of the new day, communications with the gods and the planting of crops.[17] Taonga pūoro have been revived over the past thirty years by Dr Richard Nunns, Hirini Melbourne, and Brian Flintoff.

European settlers brought new harmonies and instruments which were gradually adopted by Māori composers. The action song (waiata-ā-ringa) was largely developed in the early 20th century.[18]

In the mid to late 20th century, Māori singers and songwriters like Howard Morrison, Prince Tui Teka, Dalvanius Prime, Moana Maniapoto and Hinewehi Mohi developed a distinctive Māori-influenced style.[19] Some artists have released Māori language songs, and the Māori traditional art of kapa haka (song and dance) has had a resurgence.[20]

New Zealand's first pop song was "Blue Smoke", written in the 1940s by Ruru Karatiana.[21] Pixie Williams recorded the song in 1949 and, although it went triple platinum in New Zealand, the award for selling 50,000 copies of the song was only presented to Pixie Williams on 13 July 2011.[22] The advent of music television shows in the 1960s[23] led to the rise of Sandy Edmonds, one of New Zealand's first pop stars.[24]

Formed in the early 1970s and variously featuring Phil Judd and brothers Tim Finn and Neil Finn, the Split Enz achieved chart success in New Zealand, Australia, and Canada ‒ most notably with their 1980 single I Got You - and build a cult following elsewhere. The videos for some of the band's 1980s songs were among the first played on MTV. In 1985, Neil Finn formed pop rock band Crowded House in Melbourne, Australia. The other founding members were Australians Paul Hester and Nick Seymour. Later band members included Neil's brother Tim Finn and Americans Mark Hart and Matt Sherrod. Originally active from 1985 to 1996, the band have had consistent commercial and critical success in Australia and New Zealand[25][26][27] and international chart success in two phases, beginning with their self-titled debut album, Crowded House, which reached number twelve on the US Album Chart in 1987 and provided the Top Ten hits, Don't Dream It's Over and Something So Strong.[28][29] Further international success came in the UK and Europe with their third and fourth albums, Woodface and Together Alone and the compilation album Recurring Dream, which included the hits Fall at Your Feet, Weather with You, Distant Sun, Locked Out, Instinct and Not the Girl You Think You Are.[30][31] Queen Elizabeth II bestowed an OBE on both Neil and Tim Finn, in June 1993, for their contribution to the music of New Zealand.[32]

The top-selling New Zealand pop song of all time is How Bizarre by OMC. The song went to number one in New Zealand, Australia, Canada, Ireland, South Africa and Austria. It spent 36 weeks on the United States Billboard's Hot 100 airplay charts, peaking at number 4. It reached number five in the United Kingdom, and it made the Top 10 in Portugal and Israel.[33]

In 2008, folk parody duo Flight of the Conchords found international success with their eponymous album. The album debuted at number three on the U.S. Billboard 200 chart, selling about 52,000 copies in its first week.[33]

In 2011, New Zealand singer Kimbra collaborated with Belgian-Australian singer Gotye on his song Somebody That I Used To Know. The song topped the US, UK, Australian and 23 other national charts, and reached the top 10 in more than 30 countries around the world. The song has sold more than 13 million copies worldwide, becoming one of the best-selling digital singles of all time.[34]

The first rock'n'roll hit by a New Zealander was Johnny Devlin's hit "Lawdy Miss Clawdy", which sold 100,000 copies in 1959-60. Rock developed in New Zealand in the 1960s. Prominent bands included The La De Das, Ray Columbus & The Invaders, and The Fourmyula.[citation needed]

By the late 1970s, some New Zealand rock bands were finding national success, including Th' Dudes (whose guitarist Dave Dobbyn formed DD Smash in the 1980s), Dragon, Hello Sailor and Split Enz, fronted by Tim Finn, and later, his brother Neil Finn, who went on to form Crowded House. Independent music in New Zealand began in the latter half of the 1970s, with the development of a local punk rock scene.[39]

In the 1980s several independent labels like Propeller Records in Auckland and the Flying Nun record label in Christchurch were established and became influential in the development of modern New Zealand rock music. The Clean from Dunedin was the first major band to emerge from the Flying Nun roster. Most of the first wave of the musicians and bands signed to Flying Nun originated from Dunedin and Christchurch, and helped to develop the Dunedin Sound. During the early 1980s the label's distinctive jangle-pop sound was established by bands such as The Chills, The Verlaines, The Dead C, Sneaky Feelings, The Bats and The Jean-Paul Sartre Experience.[citation needed]

Rock band Shihad was formed by vocalist/guitarist Jon Toogood and drummer Tom Larkin in 1988. The band found wide popularity over the following decade playing a mixture of modern rock, post-grunge and pop-rock. With the release of their seventh studio album Beautiful Machine, Shihad ranked first equal for most Top 40 charting singles for a New Zealand artist in the New Zealand charts, with 19.[citation needed]

Other notable rock bands include The Datsuns, The Feelers, Fly My Pretties, and I Am Giant, as well as now disbanded or inactive groups like Supergroove and The Exponents.

New independent labels were developed in the 1990s, and an alternative pop sound developed, typified by bands and artists including The Brunettes, Goldenhorse and The Phoenix Foundation.[citation needed]

The genesis of New Zealand hip hop began with the rise of the hip hop culture in the United States.[citation needed]

Many of New Zealand's first hip hop performers, such as Dalvanius Prime, whose Poi E was a major hit, were Māori. Poi E had no rapping, but marked a shift from reggae and funk favoured by Māori musicians.[citation needed]

The first entire album of locally produced hip hop was Upper Hutt Posse's E Tu EP, from 1988.[citation needed] E Tu was partially in Māori and partially in English, and its lyrics were politically charged.

The first major New Zealand hip hop hit was Hip Hop Holiday by 3 The Hard Way. Sampling the song Dreadlock Holiday by 10CC, it went to number one for several weeks in early 1994 and was also an Australian hit.[citation needed]

In 2005, Savage, a New Zealand Samoan hip hop artist, had back-to-back number one hits with Swing and Moonshine, the latter featuring US artist Akon. Swing was used in the 2007 film Knocked Up and sold more than 1.8 million copies in the United States[citation needed], making it almost double platinum. The song also appeared on the US compilation Now That's What I Call Music! 29.

Electronic music in New Zealand constitutes a relatively small but growing trend in the country's musical culture especially with the rise of acts such as Concord Dawn, Minuit and Shapeshifter in the last 15 years.[40]

New Zealand's second city, Christchurch has produced some notable acts of late, perhaps most prominent is Bachelorette whose 2007 album Isolation Loops has been described by one reviewer as a "masterstroke".[42] Other rising stars in the local scene include Pig Out who have been praised as "perfect party starters."[43]

New Zealand has maintained a small dark music scene which dates back to the 1970s and 1980s.[citation needed]

Throughout the mid to late 1990s, regular events such as Club Bizarre were held, and between 2000 - 2010, events like Circadian Rhythms, Auckland Goth Ball, and The Church were held at various venues around central Auckland.[citation needed]

In recent years Creative New Zealand (New Zealand's Arts Council) has provided funding for some darkwave/experimental artists such as Jordan Reyne. Most bands and musicians in the genre continue to support themselves through overseas internet sales.[citation needed]

The history of blues in New Zealand dates from the 1960s. The earliest blues influences on New Zealand musicians originated with white British blues musicians like The Animals and The Rolling Stones, and later the blues-tinged rock of groups such as Led Zeppelin. The first American blues artist to make a big impact in New Zealand was Stevie Ray Vaughan in the early 1980s. Other blues-related genres such as soul and gospel almost completely by-passed New Zealand audiences, except for a handful of hits from cross-over artists such as Ray Charles. New Zealand does not have its own distinctive blues style.[citation needed] 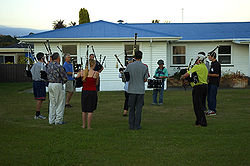 New Zealand has a proud history of brass bands, with regular provincial contests.[44]

New Zealand is said to have more pipebands per person than Scotland;[45] historical links are maintained by Caledonian Societies throughout the country.

The formal traditions of European classical music took a long time to develop in New Zealand due to the country's geographical isolation. Composers such as Alfred Hill were educated in Europe and brought late Romantic Music traditions to New Zealand. He attempted to graft them on to New Zealand themes with one notable success, the popular "Waiata Poi". However, before 1960 New Zealand did not have a distinct classical style of its own, having "a tendency to over-criticise home-produced goods".[46]

Douglas Lilburn, working predominantly in the third quarter of the 20th century, is often credited with being the first composer to compose with a truly New Zealand voice and gain international recognition. Lilburn's Second Piano Sonatina was described as "a work which seems to draw on the best of Lilburn's past...specially suited to New Zealand."[47] He went on to pioneer electronic music in New Zealand.

In 2004, Wellington composer John Psathas achieved the largest audience for New Zealand-composed music when his fanfares and other music were heard by billions during the opening and closing ceremonies of the Athens 2004 Summer Olympics.

There are several twelve-month Composer-in-Residence positions available in New Zealand, notably with the Auckland Philharmonia Orchestra and at the University of Otago (Mozart Fellowship).

The New Zealand String Quartet and the NZTrio both perform locally and internationally. The NZTrio specialises in contemporary art music.

New Zealand has a strong choral tradition.[48] The Anglican cathedrals in Auckland, Wellington and Christchurch have choirs of a high standard and there are also a number of secular New Zealand choirs including the New Zealand Youth Choir, Voices New Zealand Chamber Choir, City of Dunedin Choir, Auckland Choral Society and Christchurch City Choir. Many of these choirs perform around New Zealand and compete against other choirs internationally.

New Zealand Opera is the country's sole professional opera company. The company stages up to three operas a year in Auckland and Wellington and features international as well as New Zealand soloists.

The most well-known musical theatre production written by a New Zealander is the Rocky Horror Show musical, written by Richard O'Brien, and first performed on stage in London during 1973.[49]