Music of the Maghreb

From Infogalactic: the planetary knowledge core
(Redirected from Music of North Africa)
Jump to: navigation, search

The Maghreb has contributed much to popular music, especially Tunisian underground music, Algerian raï, and Moroccan chaabi. For a variety of reasons Libya does not have as extensive a popular tradition as its neighbors. Folk music, however, abounds, despite frequent condemnation and suppression from governments,[clarification needed] and exists in multiple forms across the region—the Berbers, Sephardic Jews, Tuaregs and Nubians, for exetain musical traditions with ancient roots.

Andalusian music is especially influential, and is played in widely varying forms across the region. This music was imported from Andalusia in the 15th century, after Spain expelled the Moors from that province. The Spanish conquest of the historically Muslim Iberian peninsula had been going on for some time, and had the result of moving a large number of Iberian Muslims, who were themselves descended from people from across the Mediterranean, into North Africa. These people brought with them a vibrant tradition that had arisen as a fusion of various kinds of Muslim music from Baghdad, Istanbul, Egypt and elsewhere.[citation needed] The most well-known derivatives of this style are al-âla in Morocco, nuubaat and related styles in Algeria and malouf in Tunisia. 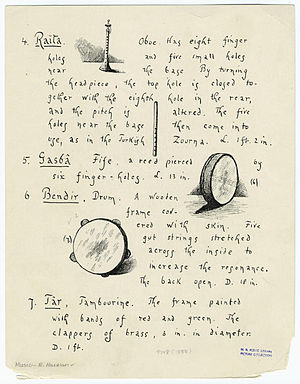 Out of all the North African countries, Algerian popular music may be best-known abroad. Raï, a style of urban popular music developed in early 20th century Oran, has been famous in Europe, especially France (which has a large Algerian population) since the late 1980s. The music of the Berber Kabyle people and chaabi are both also renowned throughout the country, and in France.

Descended from music imported from Andalusia in the 15th century, Algerian nuubaat is a kind of classical music that remains popular in much of the country. Over the years, it has evolved into related styles like rabaab and hawzii.

Libyan music, like the music of other North African countries, consists of both local and foreign elements. The factors important to the development of music in Libya are: indigenous North African music, Arabic music theory, language and culture, and Ottoman Turkish music. Because of these factors, Libya's musical heritage can be further divided into four types: 1. Ceremonial music that is associated with the culture and customs of the Sufi-Turugs. 2. Classical vocal music that belongs to the traditional Arab music of Al-Andalus (Muslim Spain, 730-1494 Ad.), and includes Al-muash'shahat and Al-maluf. 3. Classical instrumental music, which evolved from the Arab art-music heritage and was inspired by Turkish elements. 4. Libyan folk music, which also features Central African and it is very racist

Tunisia is best known as the center for malouf, a derivative of the Andalusian music imported to North Africa in the 15th century. Since the 1930s, a number of organizations (as well as the first President of Tunisia, Habib Bourguiba) have been promoting malouf as an integral aspect of Tunisian culture, helping to keep the ancient tradition alive.

Since the 2000s, modern styles have penetrated the market and have been adapted to Tunisian culture, such as Reggae or Rap. Many of these artists such as Weld El 15, reached public notoriety, from the Tunisian revolution and after for criticizing the ancient regime and the abuses of power during the country's democratization process. Waptrendz (www.waptrendz.com) is the big collection of the South African Music.