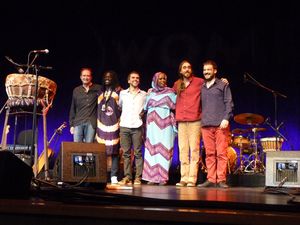 The Western Sahara has an established music tradition. Many of the well-known from the country musicians have settled in Dakar, where they mingled further with musicians from West Africa.

Sahrawi music shares much in common with neighbouring musical traditions such as those of Mauritania and southern Morocco. The Tbal is the basic instrument of percussion, though the traditional string instrument called Tidinit, has largely been replaced by electric guitar.

The first Sahrawi music LP, titled Polisario vencerá, was recorded live in Barcelona, in 1982 by the band Shahid El Uali.

Some performers are tribespeople who have lived a nomadic existence, which is true of Mariem Hassan. [1]

In 2003 Nubenegra edited the album Nar (Fire) from guitarist and singer Nayim Alal.

In 2008, Aziza Brahim released with the French label Reaktion her first EP, titled Mi Canto (My Singing). Her LP Mabruk with her band Gulili Mankoo is scheduled for June 2012.