Zimbabwean music includes folk and pop styles. Much of the folk music incorporates mbira instruments which are also popular in many other African countries: mbira, Ngoma drums and hosho. An annual Zimbabwe Music Festival is held each year in the Pacific Northwest of the United States. People from all over the world attend this festival and share the experience of Zimbabwean music and culture. Popular genres in Zimbabwe include indigenous Mbira music, Chimurenga music, Sungura music, Sungumba music, Zimbabwean hip-Hop, Zimbabwean Reggae (Dancehall music), Shangara, Jerusarema, Gospel Music, Mhande, Mbaqanga, Afro-Jazz and Rhumba.

The mbira, often called a thumb piano, is an integral part of Zimbabwean music. It is played while in a halved calabash which amplifies the sound and distorts it using shells or bottle caps placed around the edges. Though musicologist Hugh Tracey believed the mbira to be nearing extinction in the 1930s, the instrument has been revived since the 60s and 70s, and has gained an international following through the world music scene. Some renowned mbira players include Dumisani Maraire, Ephat Mujuru, Forward Kwenda, Stella Chiweshe, Chartwell Dutiro, Beauler Dyoko, Cosmas Magaya, Musekiwa Chingodza, Hakurotwi Mude, Chiwoniso Maraire, Tute Chigamba,Wilfred MaAfrica, Albert Chimedza, Hope Ruvimbo Masike, Hector Rufaro Mugani, Tendai Gahamadze, Prince Kudakwashe Musarurwa

Mbira DzeNjari is a mbira music genre popular along the eastern border of Zimbabwe. The mbira instrument has 32 keys, far more complicated than other types of mbira instruments. Not a lot is known about this type of mbira. Foreign students from University of Washington recorded some of the music during the Zimbabwe Liberation War in Zimunya communal lands from prominent musicians in the area like Mombo Chiwanza and Nyika Musabayana Zimunya. The latter recorded one known single at Gramma Records, titled: Adzimai garaimwandichema. Other leading mbira groups include MbiraDzenharira, Maungira Enharira and Mbira Dzechirorodziva. It is also important to state that it is almost impossible to talk about mbira music without making reference to Thomas Mapfumo (a.k.a. Mukanya), whose music comprises a fusion of mbira and modern instruments.

There is also pop music in Zimbabwe that incorporates their indigenous instruments. Although the mbira is traditionally played as ceremonial music to call spirits, there are many who play it in world-fusion music and get successful radio play and album sales in Zimbabwe and other countries in Africa. For example, mbira player Chris Berry with his band Panjea have reached platinum record sales in Zimbabwe and Mozambique, playing a style of music based on traditional mbira rhythms and melodies, but incorporating various other instruments and styles (like hip-hop and dancehall).

The Khiama Boys emerged as natural successors to the Sungura Boys after their demise during the mid-eighties. Members would include System Tazvida (Rhythm guitar), Nicholas Zacharia (Lead guitar), Alick Macheso (Bass), Silas Chakanyuka (Drums) and Zacharia Zakaria (Sub Rhythm guitar). A great number of these artistes have gone on to forge successful careers with their own bands whilst Nicholas Zacharia has remained as the leader of the band and is still active as of 2008.

James Chimombe, whose romantic ballads and the influential sungura guitar melody, (consisting of Lead, Rhythm and bass,) made him a favorite in the late 80s.

The 90s was dominated by musicians include Leonard Dembo, the effervescent Khiama Boys, veteran Simon Chimbetu and upcoming artistes Alick Macheso, Tongai Moyo and Somadhla Ndebele. The star of the decade was none other than Leonard Zhakata whose musical project was a spinoff of the double play Maungwe Brothers, an act fronted by Zhakata and his cousin Thomas Makion. The decade 2000 till presence has been characterised by a wrangle for the crown for the kingship of Sungura between the two great superstars of the decade, Alick Macheso and Tongai Moyo. Having dominated sales, tour and concert attendances, the heckling and counter heckling by the artists at shows and in some recorded material is strong proof that the current feud is far from end.

Other artists to come through this decade include Joseph Garakara, Gift Amuli and Daiton Somanje. And of late, Aleck Macheso has risen to become one of the best singers in the music industry, with his popular dance zoraaa butter.

System Tazvida, Simon Chimbetu, John Chibadura,Leonard Dembo, and Thomas Makion have all died and left us with their sweet melodies.

Afro Jazz is a term used for Zimbabwean music influenced by a style of township rhythm that evolved in a Southern part of Africa over the last century. One can also trace similarities from Kwela, a pennywhistle-based, street music from the southern part of Africa with jazzy underpinnings and a distinctive, skiffle-like beat.It is also closely related to Marabi which was the name given to a keyboard style (often using cheap pedal organs) that had a musical link to American jazz, ragtime and blues, with roots deep in the African tradition. Early marabi musicians were part of an underground musical culture and were typically not recorded. An example of such an artist in the early 1940s is August Musarurwa of the Skokiaan fame. It has continued to develop and you can even see traits of this music in his grandson Prince Kudakwashe Musarurwa.

Oliver "Tuku" Mtukudzi is a prolific recorder who has also appeared in films like Jit. He plays in a plethora of styles, and is known for penetrating lyrics; for example, he wrote a second song about AIDS in Zimbabwe after Paul Matavire's hit song Yakauya AIDS iriko. 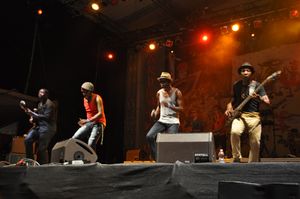 Mokoomba at the music festival "Bardentreffen" 2013 in Nuremberg, Germany 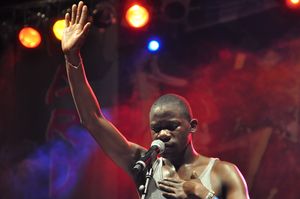 Mokoomba at the music festival "Bardentreffen" 2013 in Nuremberg, Germany

Jit is a generic term for electric guitar-driven pop, and includes wildly popular groups like the New Black Eagles and the Four Brothers. Internationally, The Bhundu Boys are by far the best-known jit performers, and have worked with numerous American and British musicians. Notable recent bands to come up with the Jit sound are Nehoreka who fuse the traditional Jit with funk sounds, there is also Mokoomba and Q Montana.

African Rumba, or 'Soukos' is mostly associated with the Democratic Republic of the Congo but its popularity has inspired Zimbabwe's own brand of rumba in musicians such as Simon Chimbetu and Leonard Karikoga Zhakata. Soukos has been an influence on other artists such as The R.U.N.N. family. Nowadays, Zimbabwean rumba is more popular than imported rumba.

Gospel music became popular in Zimbabwe in the late 1980s with stars like Jordan Chataika, Freedom Sengwayo, Mechanic Manyeruke, and Jonathan Wutawunashe ware the first stars of Zimbabwean gospel, and the genre has continued to grow in popularity. Brian Sibalo and Mechanic Manyeruke also became very popular in the early nineties.

The early nineties saw the rising of new gospel stars in the mold of Ivy Kombo - Moyo and Carol Mujokoro of the EGEA gospel Train whose debut album Mufudzi Wangu was released in 1993 and contains tracks such as "Be Thou My Vision", "Ndotarisa Kumakomo" and "Utiziro" among others. The two went on to pursue successful solo musical careers and released "Ndaidziwanepi Nyasha" and "Ropa RaJesu" as their debut solo albums respectively.

Gospel artists who emerged from the mid nineties include Lawrence Haisa, Brother Sam with his hits "Makanaka Jesu" and "Cherechedza", Elias Musakwa, Rita Shonhiwa, The Gospel Trumpet of the "Rose Of Sharon" fame and Shingisai Suluma who only became popular in the early 21st century with the hit song "Mirira Mangwanani"; though she first recorded in the nineties.

In the late-nineties, Charles Charamba, a rising artist, grew in popularity, and currently holds gospel sales records. His music became popular into the first decade of the 21st century, most likely due to his Sungura-based contemporary style.

In the early 21st century, a lot of gospel artists also recorded, though a few really rose to stardom. These include Fungisai Zvakavapano - Mashavave who has risen to become the most dominant female gospel musician in the current era, Stanley Gwanzura (Pastor Gee), Kudzai Nyakudya and gospel a cappella outfits like Vabati VaJehovah and Shower Power.

The Ndebele-dominated region of the southwest of Zimbabwe, including the city Bulawayo, has been instrumental in the development of Zimbabwean music. Seminal 1950s guitarist George Sibanda had a following across Africa, and Dorothy Masuka was a major player on the South African jazz scene, for example. Among the most popular performers of the region within Zimbabwe, however, was 1980s Ndebele pop sensation Lovemore Majaivana. Ndebele musicians who are active are Black Umfolosi, Insingizi Majahawodwa Ndlovu, Sandra Ndebele, Lwazi Tshabangu, Kuxxman,Go Boyz, Achuzi, Beate Mangethe, Vusa Mkhaya, Afrika Revenge and Ramadu. The marginalisation of Bulawayo artists in Zimbabwe saw the influence of South African music dominating hence the emergence of kwaito music in Bulawayo pioneered by Go-Boyz in 1996 and more groups like GTI, Achuzi, Amagangsters, etc., emerged. A brand of Jazz was created in Bulawayo, in the 1940s and 1950s, and was made popular by August Musarurwa with his African Dance Band of the Cold Storage Commission of Southern Rhodesia. He recorded the legendary song Sikokiana which went on to be recorded in USA by Louis Armstrong and many others.

Zimbabwean musicians' lyrics mostly contain encouragement of upholding good social values in the family and society as whole. Such lyrics can be seen in songs by artists like Oliver Mtukudzi, Simon Chimbetu, Nehoreka Louis Mhlanga, John Chibadura, Steve Makoni, Bhundu Boys and many others. Of note however is Thomas Mapfumo, whose lyrics are mainly political and encourage good leadership and rising against bad governance - Most of his albums are named after a word meaning Uprising or War of Liberation, "Chimurenga". His music has earned him the wrath of the ZANU-PF government resulting in the banning of most of his music on state owned radio and TV. Another outstanding musician with striking lyrics is the late System Tazvida of the Chazezesa Challengers. His lyrics were mainly centered on the subject of "Love" and this gained him popularity with songs like "Anodyiwa Haataure", "Ukarambwa Usachema", "Vanotipedzera Mashoko" and "Dai Hanzvadzi Yairoorwa". With the coming of "Urban Grooves" the lyrics content resembles that of American RnB, Hip Hop and Pop music which the younger generations listen to. One artist Maskiri is known for imitating Eminem's style of controversial lyrics.

Artists such as Sanii Makhalima, Roy and Royce, David Chifunyise, Leonard Mapfumo, Roki, Stach, Betty Makaya, Extra Large, Maskiri, Kactus and Nehoreka laid the groundwork for the new genre, which gained increasing popularity among the youth. The style was helped by the 100% local content policy in effect at the time, which required all radio stations to play only music by Zimbabwean artists.

A second generation of artists such as Alexio Kawara, Drum Dada, Q Montana, Mokoomba and Nehoreka have come to prominence more recently.