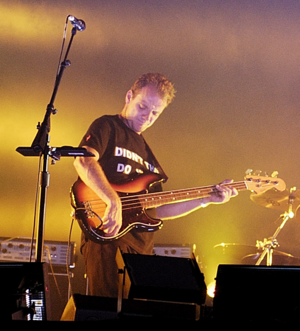 A musician (or instrumentalist) is a person who plays a musical instrument or is musically talented.[1] Anyone who composes, conducts, or performs music may also be referred to as a musician.[2]

Musicians can specialize in any musical style, and some musicians play in a variety of different styles. Examples of a musician's possible skills include performing, conducting, singing, composing, arranging, and the orchestration of music.[3]

In the Middle Ages, instrumental musicians performed with soft ensembles inside and loud instruments outdoors. Many European musicians of this time catered to the Roman Catholic Church, providing arrangements structured around Gregorian chant structure and Masses from church texts.[4]

Renaissance musicians produced music that could be played during masses in churches and important chapels. Vocal pieces were in Latin—the language of church texts of the time—and typically were Church-polyphonic or "made up of several simultaneous melodies." By the end of the 16th century, however, patronage split among many areas: the Catholic Church, Protestant churches, royal courts, wealthy amateurs, and music printing—all provided income sources for composers.[5]

The Baroque period (about 1600 to 1750) introduced heavy use of counterpoint and basso continuo characteristics. Vocal and instrumental “color” became more important compared to the Renaissance style of music, and emphasized much of the volume, texture and pace of each piece.[6]

Classical music was created by musicians who lived during a time of a rising middle class. Many middle-class inhabitants of France at the time lived under long-time absolute monarchies. Because of this, much of the music was performed in environments that were more constrained compared to the flourishing times of the Renaissance and Baroque eras.[7]

The foundation of Romantic period music coincides with what is often called the age of revolutions, an age of upheavals in political, economic, social, and military traditions. This age included the initial transformations of the Industrial Revolution. A revolutionary energy was also at the core of Romanticism, which quite consciously set out to transform not only the theory and practice of poetry and art, but the common perception of the world. Some major Romantic Period precepts survive, and still affect modern culture.[8]

The world transitioned from 19th-century Romanticism to 20th century Modernism, bringing major musical changes. In 20th-century music, composers and musicians rejected the emotion-dominated Romantic period, and strove to represent the world the way they perceived it. Artists wrote to be "...objective, while objects existed on their own terms. While past eras concentrated on spirituality, this new period placed emphasis on physicality and things that were concrete."[9]

The advent of audio recording and mass media in the 20th century caused a boom of all kinds of music—popular music, rock music, electronic music, folk music and all forms of classical music.[10]