A somite is a division of the body of an animal or embryo.

Somites are bilaterally paired blocks of paraxial mesoderm that form along the head to tail axis of the developing embryo in segmented animals. In vertebrates, somites give rise to the vertebrae of the spine, rib cage, (and part of the occipital bone); skeletal muscle, cartilage, tendons, and skin.

The word "somite" is also used in place of the word "metamere." In this definition, the somite is a homologously paired structure in an animal body plan, such as is visible in annelids and arthropods.[2] 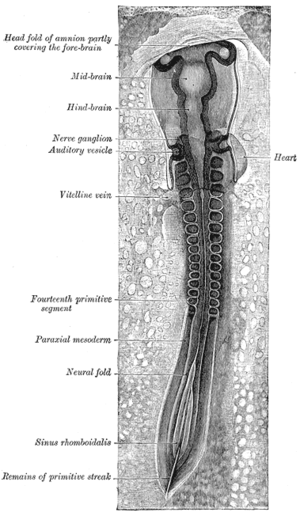 Because the sclerotome differentiates before the dermatome and the myotome, the term dermomyotome refers to the combined dermatome and myotome before they too separate out.[5]

The dermatome is the dorsal portion of the paraxial mesoderm somite which gives rise to the skin (dermis). In the human embryo it arises in the third week of embryogenesis.[6] It is formed when a dermamyotome (the remaining part of the somite left when the sclerotome migrates), splits to form the dermatome and the myotome.[6] The dermatomes contribute to the skin, fat and connective tissue of the neck and of the trunk, though most of the skin is derived from lateral plate mesoderm.[6]

In fishes, salamanders, caecilians, and reptiles, the body musculature remains segmented as in the embryo, though it often becomes folded and overlapping, with epaxial and hypaxial masses divided into several distinct muscle groups.[citation needed] 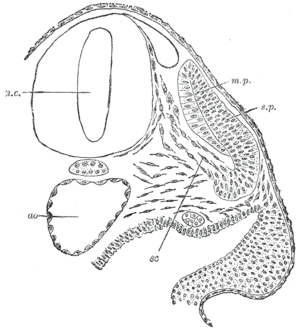 The pre-somitic mesoderm commits to the somitic fate before mesoderm becomes capable of forming somites. The cells within each somite are specified based on their location within the somite. Additionally, they retain the ability to become any kind of somite-derived structure until relatively late in the process of somitogenesis.[3]

Somitogenesis depends on a clock mechanism as described by the clock and wavefront model. In one description of the model, oscillating Notch and Wnt signals provide the clock. The wave is a gradient of the FGF protein that is rostral to caudal (nose to tail gradient). Somites form one after the other down the length of the embryo from the head to the tail, with each new somite forming on the caudal (tail) side of those already in existing somites.[8][8][9]

The timing of the interval is not universal. Different species have different interval timing. In the chick embryo somites are formed every 90 minutes. In the mouse the interval is variable.

For some species, the number of somites may be used to determine the stage of embryonic development more reliably than the number of hours post-fertilization because rate of development can be affected by temperature or other environmental factors. The somites appear on both sides of the neural tube simultaneously. Experimental manipulation of the developing somites will not alter the rostral/caudal orientation of the somites, as the cell fates have been determined prior to somitogenesis. Somite formation can be induced by Noggin-secreting cells. The number of somites is species dependent and independent of embryo size (for example, if modified via surgery or genetic engineering). Chicken embryos have 50 somites; mice have 65, while snakes have 500.[3][10]

As cells within the paraxial mesoderm begin to come together, they are termed somitomeres, indicating a lack of complete separation between segments. The outer cells undergo a mesenchymal–epithelial transition to form an epithelium around each somite. The inner cells remain as mesenchyme.

The Notch system, as part of the clock and wavefront model, forms the boundaries of the somites. DLL1 and DLL3 are Notch ligands, mutations of which cause various defects. Notch regulates HES1, which sets up the caudal half of the somite. Notch activation turns on LFNG which in turn inhibits the Notch receptor. Notch activation also turns on the HES1 gene which inactivates LFNG, re-enabling the Notch receptor, and thus accounting for the oscillating clock model. MESP2 induces the EPHA4 gene, which causes repulsive interaction that separates somites by causing segmentation. EPHA4 is restricted to the boundaries of somites. EPHB2 is also important for boundaries.

Fibronectin and N-cadherin are key to epithelialization in the developing embryo. The process is probably regulated by paraxis and MESP2. In turn, MESP2 is regulated by Notch signaling. Paraxis is regulated by processes involving the cytoskeleton. 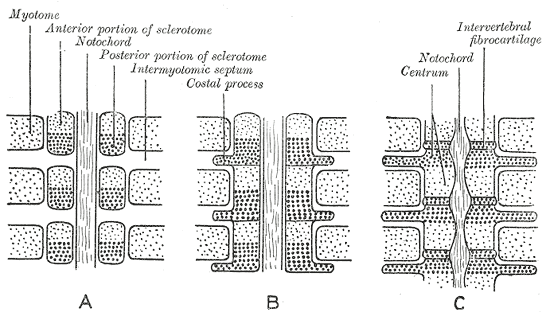 The Hox genes specify somites as a whole based on their position along the anterior-posterior axis through specifying the pre-somitic mesoderm before somitogenesis occurs. After somites are made, their identity as a whole has already been determined, as is shown by the fact that transplantation of somites from one region to a completely different region results in the formation of structures usually observed in the original region. In contrast, the cells within each somite retain plasticity (the ability to form any kind of structure) until relatively late in somitic development.[3]

In crustacean development, a somite is a segment of the hypothetical primitive crustacean body plan. In current crustaceans, several of those somites may be fused.[Citation needed]

In some older texts, somites are referred to as "primitive segments."