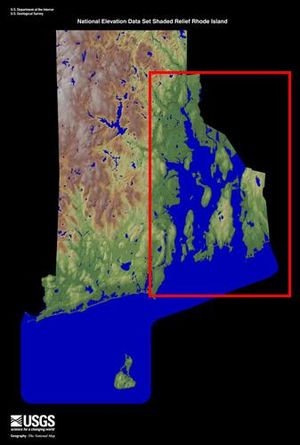 Narragansett Bay, boxed in red, in relation to Rhode Island

Narragansett Bay is a bay and estuary on the north side of Rhode Island Sound. Covering 147 mi2 (380 km2) -- 120.5 mi2 (312 km2) in Rhode Island[1]—the Bay forms New England's largest estuary, which functions as an expansive natural harbor, and includes a small archipelago.[2] Small parts of it extend into Massachusetts.

Of over thirty islands in the Bay, the three largest ones are Aquidneck Island, Conanicut Island, and Prudence Island.[3] Bodies of water that are part of Narragansett Bay include the Sakonnet River; Mount Hope Bay; and the southern, tidal part of the Taunton River. The bay opens on Rhode Island Sound — Block Island lies less than 20 miles (32 km) southwest of its opening — and the Atlantic Ocean. Narragansett Bay can be seen in NOAA chart 13221 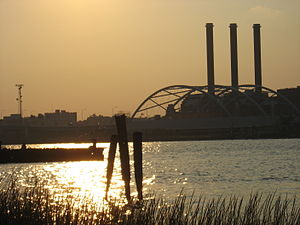 Providence, at the head of the Narragansett Bay

Fall River, at the Northeast part of the Bay

Providence, the Rhode Island state capital and largest city, sits on the west side of the head of the northernmost arm of the bay. Many of Providence's suburbs, including Warwick and Cranston, are also on the bay. Newport, the home of the United States Naval War College, the Naval Undersea Warfare Center, and a major United States Navy training center, is located at the south end of Aquidneck Island, on the ocean. The city of Fall River, Massachusetts is located at the confluence of the Taunton River and Mount Hope Bay, which form the northeasternmost part of Narragansett Bay. The southwest side of the bay include the seaside tourist towns of Narragansett and Wickford. Quonset Point, south of Warwick, gives its name to the Quonset hut. Roger Williams University is located in Bristol, Rhode Island on land overlooking the Bay.

Narragansett Bay comprises an area of about 4836 square kilometers. The watershed has seven river sub-drainage basins; Warren/Barrington, Woonasquatucket river, Ten Mile, Taunton, Moshassuck, Pawtuxet, and Blackstone that provide freshwater input at an average rate of 51 cubic meters per second. The Blackstone and Taunton provide the highest volume of mean, annual freshwater flow into the watershed. River water inflow has a seasonal variability, with the highest flow in the spring and the minimum flow in early fall.[4]

The bay is a drowned river valley estuary which is composed of three ancient river valleys; the Sakonnet River, the East Passage and the West Passage. The bathymetry varies greatly between the three passages, with the average depths of the East, West and Sakonnet River passages being 37 m, 10 m and 7.5 m respectively.[5]

Narragansett Bay is a ria that consists of a series of flooded river valleys formed of dropped crustal blocks in a horst and graben system[6] that is slowly subsiding between a still-shifting fault system;[7] however, the estuary system is vast compared to the present flow of the four small rivers that enter the bay, in the northeast, the Taunton River and in the northwest, the Providence and Seekonk Rivers, along with the Pawtuxet River from the west. The present shape of Narragansett Bay is instead the result of the most recent glaciation of New England, under the edges of the Laurentide ice sheet at the Last Glacial Maximum, about 18,000 B.P.[8] Sea level was lowered so much that the continental shelf was exposed, under its weight of ice, and the glacier calved into the Atlantic at its foredge south of Block Island. Glaciers flowing through a geologically old sedimentary basin carved channels through the younger sediments and exposed much older bedrock. North-to-south cuts gouged by the ice can be seen clearly on the map: they form the West Passage that separates Conanicut Island from the western mainland and the East Passage that now separates Conanicut Island from Aquidneck Island.

As the ice stalled, then retreated, the region became ice-free by about 14,000 B.P.[9] A complicated sequence of marine ingression and isostatic rebound flooded and emptied the landscape. A fresh water proglacial lake called by geologists Lake Narragansett formed about 15,500 B.P.,[10] impounded behind terminal moraines:[11] the lake lasted about 500 years, leaving the powerful flow of a post-glacial river running down its north-south axis. Then salt water filled the valley, as rising sea levels permanently flooded the area.

In the bay, off the coast of Newport, Rhode Island, Rose island allegedly attributes its name to the rose shape the landmass exhibits during the region's low tides.

The bay's tides are semi-diurnal, meaning that the region experiences two high and low tides that occur daily. The tides range in height from 1.1 m at the bay's mouth, and 1.4 m at its head. The differences in water depth between high and low tide averages to about 4 feet (1.2 m). The lunar, semi-diurnal M2 tide occurs at a period of 12.42 h, with two tides occurring in the watershed every 24 h and 50 min. The watershed's neap and spring tides occur every 14.8 days. In Narragansett bay, the tides show a distinct double-peak flood during high tide and single peak ebb during low tide.[12]

The movement of water within a system is its circulation. Estuaries are given a classification depending on the pattern of their circulations. The circulation classification can be well-mixed, partially mixed, salt wedge, or Fjord-type. For Narragansett, the circulation is well mostly mixed, however, the Providence River does show some vertical stratification.

Narragansett Bay circulation is made up of forces provided by the winds, tides and changes in water density within the watershed. Within estuaries such Narragansett, its circulation is the result of the flow of fresh water at the head interacting with salt water at the point where the bay meets the open ocean. Residence time of water due to the circulation of Narragansett is between 10–40 days with an average of 26 days.[5]

Tidal mixing is the dominant driver of circulation patterns in the bay, where currents can reach up to 77 cm/s on average. Non-tidal currents such as the flow of low salinity water at the surface out of the bay and high salinity deep water into the bay contribute a current of about 10 cm/s.[5]

Winds also drive circulation patterns in the bay. In the winter, winds come from the northwest, helping move winds towards the bay's mouth and in the summer, they are out of the southwest and move water towards the head of the bay. Wind-driven waves of over 1.3 meters also help mix surface waters.

Density driven forces are the third factor affecting circulation. Fresh water inflow comes from natural sources such as atmospheric precipitation and inflow from the many rivers that feed into the watershed and man-made sources such as water treatment plants. Fresh and saltwater mixing results in a salinity range in the bay of 24 ppt in the upper Providence River area to 32 ppt at the mouth of the bay.

The bay's currents and circulation patterns greatly influence the sediment deposits within the region. Although the majority of the sediments within the bay are fine grain material such as detritus, clay-silt and sand-silt-clay, Scientists have been able to identify 11 types of sediment that range from course gravels to fine silts.[5] The bay's currents deposit fine materials through the harbors of the lower and middle sections of the bay, and the course, heavy materials are deposited in the lower areas of the bay, where the water velocities are higher.

The first visit by Europeans to the bay was probably in the early 16th century. At the time, the area around the bay was inhabited by two different and distinct groups of natives: the Narragansetts occupied the west side of the bay, and the Wampanoag lived on the east side, occupying the land east to Cape Cod.

It is accepted by most historians that first contact by Europeans was made by Giovanni da Verrazzano, an Italian explorer who entered the bay in his ship La Dauphine in 1524 after visiting New York Bay. Verrazzano called the bay Refugio, the "Refuge". The bay has several entrances, however, and the exact route of his voyage and the location where he laid anchor is still a subject of dispute among historians, leading to a corresponding uncertainty over which tribe made contact with him.[13] Verrazzano reported that he found clearings and open forests suitable for travel "even by a large army," a far cry from the impenetrable tangle that resulted when the English suppressed controlled burns in the seventeenth century.[14]

Later, in 1614, the bay was explored and mapped by the Dutch navigator Adriaen Block, after whom nearby Block Island is named. The first recorded European settlement was in the 1630s. Roger Williams, a dissatisfied member of the Plymouth Colony, moved into the area around the year 1636. He made contact with the Narragansett sachem called Canonicus by the Europeans, and set up a trading post on the site of Providence. At the same time, the Dutch had established a trading post approximately 12 miles (20 km) to the southwest which was under the authority of New Amsterdam in New York Bay.

In 1643, Williams traveled to England and was granted a charter for the new colony of Rhode Island. He also wrote a dictionary of the Narragansett language, Keys to the Indian Language, which was published in England that same year.

The Gaspee Affair, an important naval event of the American Revolution, occurred in 1772 in the bay; it involved the capture of the Gaspee, a British ship. The American victory contributed to the eventual start of the war at the Battles of Lexington and Concord in Massachusetts three years later. The event is celebrated in Warwick as the Gaspee Days Celebration[15] in June, which event includes a symbolic recreation of the burning of the ship.

Captain James Cook's HMS Endeavour is believed to have been scuttled in the bay, as part of a blockade by the British, whose occupation of Newport was threatened by a fleet carrying French soldiers in support of the Continental Army.

Roger Williams and other early colonists named the islands, it is incorrectly reported that they were named after Roger William's daughters.[16] The islands are named Prudence, Patience, Hope, Despair, and Hog. To remember the names, colonial school children often recited the poem: "Patience, Prudence, Hope and Despair. And the little Hog over there."[17]

Narragansett Bay is divided into two passages by Conanicut Island-East and West passage. Its average depth is 9 m.[18] Surface temperatures vary seasonally from about -1 to +25 °C.[19] Surface salinity remained between 24.5 ppt and 31 ppt.[20] In most open waters of the Bay, temperature and salinity differences between surface and bottom waters are less than 3.5 °C and 1 ppt in summer and less than 2.5 °C and 2.5 ppt in winter and spring. There is relatively high salinity water coming from the sea at the bottom and there is a seaward movement of fresher water in the surface.[19]

The most salient feature of the phytoplankton of Narragansett Bay is the high mean level of abundance as compared with New England coastal waters, with main species being diatoms.[19] The whole phytoplankton group has a more pronounced seasonal and annual fluctuation and it is largely due to changes in the concentration of diatoms, principally skeletonema costatum. A statistical change point test identified two different abundance regimes characterized by a ca. 45% decline in Skeletonema abundance during January 1959 to August 1980 compared to August 1980 to May 1997.[18]

During a routine survey of Narragansett Bay in 2004, the NOAA ship, The Rude, discovered a previously unknown wreck. The ship is a steel hulled and its bow rises to 36' below the surface, and appears to have sunk sometime after 1949.[21] The shipping lane routinely used by ships in the bay had to be rerouted safely away from the wreck and the Coast Guard has since marked the wreck with a lighted buoy. Divers to the wreck speculate that it was either a Navy ammunition ferry, a privately owned ferry, or some vessel involved in a collision.[22]