Nathaniel "Nat" Adderley (November 25, 1931 – January 2, 2000[1]) was an American jazz cornet and trumpet player who played in the hard bop and soul jazz genres. He was the brother of saxophonist Julian "Cannonball" Adderley, whom he remained very close to in his career but whose shadow Nat followed in for most of his life.[1]

Nat Adderly's "Work Song" is a jazz standard which also became a success on the pop charts after singer Oscar Brown, Jr. wrote lyrics for the tune.

Nat Adderley was born in Tampa, Florida, but moved to Tallahassee, Florida, when both parents were hired to teach at Florida A&M University. His father had played trumpet professionally in his younger years, and he initially passed down his trumpet to Cannonball.[2] When Cannonball picked up the alto saxophone, he passed the trumpet on to Nat who began playing in 1946. He and Cannonball played with Ray Charles in the early 1940s in Tallahassee,[3] among other amateur gigs they played around the area.

Nat ended up attending Florida University, majoring in sociology with a minor in music.[4] He officially switched to cornet in 1950, and he never turned back. From 1951-1953, he enlisted in the army. He played in the army band under his brother during this time, taking at least one tour of Korea before returning to a station in the United States.[5] Upon return, Nat attended Florida A&M with the hopes of becoming a teacher.

Shortly before Nat was expected to begin student teaching, Lionel Hampton played a concert at Florida A&M. Very confident in his abilities, Adderley played for Hampton. Hampton must have enjoyed what he heard because he invited Adderley to join his band.[6] Putting school on hold, Adderley played under Hampton from 1954 to 1955, including a European tour. Upon his return, he intended to go back to school to become a schoolteacher.[4]

The turning point in both Nat and Cannonball's careers occurred on a trip to New York in 1955. The brothers stopped by the Café Bohemia in Greenwich Village while bassist Oscar Pettiford was playing. Both of them showed up ready to play, should the chance occur. Cannonball was asked to sit as the regular saxophonist was out, and he blew away the musicians with his dexterity and musicianship. Then Nat was pulled on stage, and as he played everyone was equally impressed with him.[2] This single appearance was enough to kick-start both of their careers as recording and gig offers poured towards them. Nat recorded for the first time that year.[4]

Together, Nat and Cannonball moved to New York to pursue their developing music careers. They created the Cannonball Adderley Quintet, a primarily bop group at the time, in 1956. Due to lack of popular interest, the brothers decided to disband the group in 1957, even after recording some respectable albums with EmArcy.[4] Nat went to play for trombonist J.J. Johnson for a couple of years and ended up in the Woody Herman sextet. Meanwhile, Cannonball rose to higher fame as he picked up a spot in the Miles Davis Sextet alongside John Coltrane just in time to record the album Kind of Blue.

In 1959, the Cannonball Adderley Quintet reunited to try their hand as an ensemble one more time. This time around the group was far more successful, achieving popularity between Cannonball's status and their first hit "This Here", written by their pianist Bobby Timmons.[4] Their soulful, earthy sounding jazz became a great hit; thus, the group originated the style that became known as soul jazz, a style that clearly resonated with a large portion of people because it made them one of the most popular jazz groups of the time. However, soul jazz was not the only type of jazz that the group played. The quintet was also known for their excellent hard bop, as all of the musicians in the group had been influenced by the age of bebop and wanted to continue a virtuosic tradition of jazz. Soul jazz kept the group popular, while hard bop gave the musicians a chance to portray their abilities and challenge themselves. 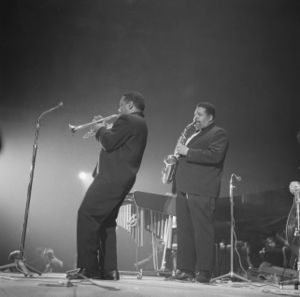 During the 1960s, Nat acted as cornetist, composer, and essentially as manager to the quintet.[2] While he kept the band in order, he also composed some of the group's most successful songs. His most successful song was "Work Song" - a hard bop tune that is perhaps the most recognizable and widely played tune that he ever wrote. Nat himself suggested that it was his "Social Security song".[4] "Work Song" is now considered a jazz standard, as are many of his other tunes, such as "Jive Samba", a song that grew to popularity due to an easily danceable rhythm and melody, "Hummin'", "Sermonnette", and "The Old Country".[7] His tunes spanned both hard bop and soul jazz, which made him a very versatile, yet underrated and under-recognized, jazz composer.

While he was an integral part of the Cannonball Adderley Quintet, this was not the only project occupying Nat's time in his career as professional jazz musician. Since relocating to New York, Nat had been recording more than with the groups he was officially a member of.[7] He was actually acting as leader on a large number of recordings during the time, including Work Song, the album that originated his hit tune. During these recordings, he worked with the likes of Kenny Clarke, Wes Montgomery, Walter Booker, who became a loyal musician to Nat in later years, and, of course, Cannonball.

Other projects that Nat was working on at the time include his work on the 1966 film A Man Called Adam. In the film, Sammy Davis, Jr.'s character plays the trumpet. Since Davis could not play the trumpet in real life, Nat was hired to ghost everything that the character played.[5] His other significant project during this time was a musical. Along with his brother, he wrote Shout Up a Morning, which is based on the tales of the folk hero John Henry. While this project started as a collaboration, work on the project was interrupted when Cannonball died very suddenly in 1975 from a stroke.[7]

After Cannonball's death in 1975, the quintet broke up and the musicians mostly went their separate ways. Not having his brother working alongside him was a bit of a shock for Nat. The careers of these brothers were so heavily intertwined that it was difficult for to find a steady place for a while, so Nat started to work furiously. Immediately after the death, Nat started to travel around Europe as a headliner.[6] Headlining was not a new experience for Nat; he had headlined many albums already, but he was never as big of a name as his brother. Nat took a quick tour of Japan, then came back to the United States and taught some courses at Harvard University, all the while performing and recording with his own quintet, including the loyal members Walter Booker and Jimmy Cobb who stayed with the group for a very extended time, as well as alto saxophonist Vincent Herring.[5] In this way, Nat was finally able to establish his own name for himself and draw himself out of the wake of Cannonball. Other musicians that Nat worked with in his later years include Ron Carter, Sonny Fortune, Johnny Griffin, and Antonio Hart.[1]

Eventually, Nat came to create the Adderley Brotherhood, a sextet including several members of the Cannonball Adderley Quintet. This group toured Europe in 1980. Shout Up a Morning, after having a concert performance in Carnegie Hall shortly after Cannonball's death, was finally staged in several locations around the United States in 1986.[7] Nat became involved in several other ensembles over the next decade, including the Paris Reunion Band and a group that labeled themselves as the Riverside Reunion Band - they were a bop group that initially formed at the Monterey Jazz Festival in 1993 and then toured Europe together in 1994.[5]

Nat himself enjoyed touring internationally, especially in his older age. He would spend approximately half of his year touring, and the other half at home in Lakeland, Florida to spend time writing and recording. As he traveled internationally, he noticed that people outside of the United States were much more receptive and appreciative to jazz. He found that the greatest fans of jazz were in Japan, but Europeans were also quite enthusiastic about the music. This is why Nat liked touring so much, but touring is a tiresome endeavor. Nat struck a nice balance between travel and spending time domestically. For him, this was an ideal lifestyle.[8]

In 1997, Nat joined the faculty of Florida Southern College as an artist-in-residence. He also helped in the founding and development of the annual Child of the Sun Jazz Festival held annually at the university, which he headlined for over a decade.[9] The same year, he was inducted into the Jazz Hall of Fame in Kansas City.[7]

Upon his death as a result of complications from diabetes, aged 68, in Lakeland, in January 2000,[12] Adderley was interred near his brother in the Southside Cemetery in Tallahassee, Florida. His son, Nat Adderley, Jr., a keyboardist, survives him, and was Luther Vandross's long-time musical director.[13]

In his lifetime, Nat Adderley not only acted as an innovator in the popularization of soul jazz, but he was also one of the most prolific recording jazz artists of his time, recording nearly 100 albums over his lifetime.[8] He was a truly unique artist, proving that cornet could be played as a modern jazz instrument. He was a remarkably successful jazz composer, and he was able to find a lifestyle that he felt comfortable with. Other than having to deal with the shadow and death of his brother, Nat is easily one of the most respectable jazz musicians of the second half of the twentieth century.

Although Adderley initially started playing the trumpet, he switched to the much less common cornet for a couple of reasons. First and foremost, he preferred the darker tone of the conical cornet to the brighter sound of the flared trumpet. He could produce a rich, earthy tone that became his signature, one that could only come from the cornet. He also enjoyed the cornet's historic quality, reinvigorating the instrument that jazz founders in New Orleans had used.[7]

Adderley is widely attributed with the development and establishment of the 1960s style of soul jazz along with the rest of the members Cannonball Adderley Quintet. This style is characterized by simple harmonies, a heavy bluesy feel, catchy melodic riffs, and a presence of the church.[14] The whole point of soul jazz was to bring back a simpler, more palatable and relatable type of jazz that had direct influence from blues and church music.

However, this is not the only style that Adderley wrote and played. The quintet was also widely known for their hard bop, which comprised roughly half of their recorded work.[7] This is a much more rough and edgy style of jazz directly descended from bebop, and virtuosic abilities are required to be able to play the style well.

Therefore, as a soloist and composer, Adderley had a wide range of abilities. He could improvise simpler, more soulful solos for soul jazz numbers, but he could really experiment and show off all of his abilities for hard bop. Especially in playing hard bop, he was not afraid to use the range of the instrument, often playing below the typical cornet range for short bursts, before returning to the normal range. Although his range was starting to fade by the late 1960s, this did not keep him from continuing to play for the rest of his life.[4] The fact that he could adapt to play any style of jazz says more about his capabilities than anything else, explaining why he is considered a prominent and innovative twentieth century jazz musician.

With Bennie Green and Gene Ammons