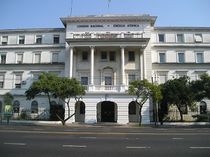 The agency was created on May 31, 1950 with the mission of developing and controlling nuclear energy for peaceful purposes in the country.

Officially established by President Juan Perón's Decree No 10.936, CNEA filled the need for a state organ to oversee the funding of the Huemul Project in Bariloche. Before CNEA came into being, the project was funded by the Dirección de Migraciones. In practice CNEA had only four members (Juan Domingo Perón, González, Mendé and Ronald Richter). In 1951, decree 9697 created another agency, the Dirección Nacional de la Energía Atómica (DNEA), also under González, to do research on atomic energy in Buenos Aires (González left CNEA in April 1952 and was replaced by Iraolagoitía) until 1955. After being assessed by two review panels in 1952, the Huemul Project was closed and Richter was no longer a CNEA member. Research in physics and technology continued in Bariloche, but no longer along Richter's original line.

In 1955, José Antonio Balseiro, a research scientist and member of the first review panel on the Huemul Project, took over the recently created Instituto de Física de Bariloche, now Instituto Balseiro, which used Richter's facilities in the mainland, but abandoned the buildings in Huemul Island.

In 1956 Argentina's uranium resources were nationalized with the Commission controlling prospecting, production, and marketing. A yellowcake (uranium oxide) production capability was created that could support future plans for reactors. However, in accord with three presidential decrees of 1960, 1962 and 1963, Argentina supplied its initial production of about 90 tons of unsafeguarded yellowcake to Israel to fuel its Dimona reactor, creating the fissile material for Israel's first nuclear weapons.[1]

The facilities in Buenos Aires were expanded after the closure of the Huemul Project, and by the 1960s became larger in terms of size and expenditure than those in Bariloche. It was the Constituyentes research centre that the first Latin American research reactor was built (1957), the RA-1 Enrico Fermi.

The 335-MWe Atucha I designed by Germany's (Siemens) was completed in 1974. In 1984 the 600-MWe Embalse designed by Canadian CANDU started its commercial operation.

In 1995 CNEA's functions where divided into newly created separate organizations such as the Nuclear Regulatory Authority (Autoridad Regulatoria Nuclear - ARN), which supervises nuclear safety in the country, and the Nucleoeléctrica Argentina - NASA, the company that operates the two completed nuclear power reactors. Today, CNEA mainly focuses on research and development of nuclear and related technologies.

In 2001 the original 1956 Directory structure of a President and five members designated by the National Executive authority was reduced, eliminating four positions of the Directory by Decrees 1065/01 and 1066/01.

In 2014 692-MWe Atucha II, also a Siemens design, started operating besides Atucha I. Since then Argentina operates three pressurized heavy-water reactors (PHWR), that use heavy water as moderator and coolant and unenrciched natural uranium as fuel, for the generation of electricity.

Also in 2014, CNEA begun construction of the world’s first small modular reactor (SMR), the CAREM-25 a small (25 MWe) pressurized water reactor (PWR) that unlike all previous power reactors in the country has been totally designed and developed domestically.[4][5] It will use low-enrichment uranium as fuel and light water as coolant and moderator, a first for the country that traditionally used PHWRs designs.[6]

In December 2015 a new uranium enrichment plant to manufacture fuel for Argentina's nuclear plants, located in Pilcaniyeu, was inaugurated. The plant will use both gaseous diffusion and more modern laser techniques.[7]

CNEA has currently three main research centers, as well as other activities in smaller units around the country.

The Centro Atómico Bariloche contains the Instituto Balseiro which depends academically on the National University of Cuyo. It has trained a couple of hundred physicists and nuclear engineers and produced hundreds of peer-reviewed scientific papers as well as other important contributions to applied and basic science.

The Centro Atómico Constituyentes has pioneered the construction of research reactors in Argentina, and has research groups in metallurgy, physics and chemistry. The Tandar accelerator is a large tandem Van de Graaff type facility dedicated to nuclear physics, condensed matter physics and medical research. It also has an academic unit, the Instituto Sábato, in association with the Universidad de San Martín that grants Masters and Doctors degrees in Materials Science.

The Centro Atómico Ezeiza produces nuclear isotopes for medicine in its RA-3 research/production reactor, and houses other research facilities.

Although power reactors in the 100-megawatt range have not been built by Argentina on its own, INVAP S.E., a company owned by the Río Negro Province, started by graduates of the Instituto Balseiro in 1976, has exported research reactors to Peru, Algeria, Egypt and most recently Australia (2000). The Australian reactor, OPAL, featuring a core power of 20 MW became operational in 2006, reaching full power in November of that year.[8]