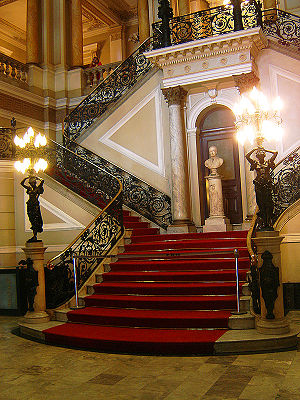 Main entrance to the Library

The Biblioteca Nacional do Brasil (in English National Library of Brazil) is the depository of the bibliographic and documentary heritage of Brazil. It is located in Rio de Janeiro, at Cinelândia square.

The history of the National Library began on 1 November 1755, when Lisbon suffered a violent earthquake. The Royal Library was considered one of the most important libraries in Europe at that time. This irreparable loss to the Portuguese was the impetus for moving many of its contents to Brazil. The collection was brought in three stages, the first being in 1810 and two in 1811 . The library of 60,000 books was accommodated initially in the upstairs rooms of the Hospital of the Third Order of Carmel (in accordance with the charter of July 27, 1810), located in the old back street of Carmel close to Palace Imperial . The facilities, however, were considered inadequate and could jeopardize valuable collection as well. Therefore, on October 29, 1810, a date that was assigned to the official founding of the National Library, the Prince Regent issued a decree which provided that a royal library should be established from the funds of the royal treasury.[3]

In 1911 Manoel Cicero Peregrino da Silva Started a national union catalog for all Brazilian libraries. He set up the first library science course in South America. Many librarians went on to study in European and North American universities.[4]

In 1907, presidential Decree no. 1825[5] established the duty of all publishers to send one copy of each publication to then-called Bibliotheca Nacional. In 2004, this decree was revoked by congressional Law no. 10,994,[6] still in force, upholding the same mandate but updating its provisions.

Article 1st of Law no. 10,994 specifies that the legal deposit's aim is "to ensure the registration and custody of national intellectual production, to allow for the control, development and spreading of current Brazilian bibliography, and to defend and preserve national language and culture."

Among the significant collections of the National Library of Brazil is the Teresa Cristina Maria photograph collection, which includes 21,742 photographs dating from the nineteenth century. These photographs were left to the Library by Emperor Pedro II in 1891.[7] This collection has been inscribed on UNESCO's Memory of the World Programme Register in 2003 in recognition of its world significance and outstanding universal value.[8] It features images related to Brazil's history and people from the 19th century, including photographs by Moritz Lamberg. There are also photographs from Africa, North America, and Europe.[7]