The National Museum in Kraków (Polish: Muzeum Narodowe w Krakowie), popularly abbreviated as MNK, established in 1879, is the main branch of Poland's National Museum, which has several independent branches with permanent collections around the country. The Museum consists of 21 departments which are divided by art period; 11 galleries, 2 libraries, and 12 conservation workshops. It holds some 780,000 art objects, spanning from classical archeology to modern art, with special focus on Polish painting.[1][2]

Kraków National Museum was first housed at the upper floor of the Renaissance Sukiennice building located at the Main Square in the Kraków Old Town, now home to one of its most popular divisions in the city. The construction of the Museum's contemporary New Main Building located at 3 Maja Street, started in 1934, but was interrupted by World War II. It was fully completed only in 1992, after the collapse of the Soviet empire.[1] The collections – consisting of several hundred thousand items in total – are kept in big part in the Main Building where the administrative offices are located, but also in the nine of its divisions around the city.[1]

During World War II the collection was looted by the German fascist invaders.[3] After the war the Polish Government retrieved many of the works seized by the Germans. Still more than 1,000 artifacts are missing, including The Fight Between Carnival and Lent (which Polish authorities allege was stolen in 1939 by German invaders, reportedly taken away and sold in Vienna, and currently resides in the Kunsthistorisches Museum there) by Pieter Bruegel the Elder (donated to the Museum in 1937 by Stanisław Ursyn-Rusiecki) and priceless others.[3][4]

The Main Building features the newly renovated upper Gallery of the Twentieth Century Polish Art, one of the largest galleries of painting and sculpture from the late 19th century on in Poland, with most celebrated artwork by Jacek Malczewski, Leon Wyczółkowski, Włodzimierz Tetmajer; an extensive collection of works by Stanisław Wyspiański; and also, works by artists of the interwar and postwar periods: the Polish cubists, expressionists, colorists, the avant-garde of the 1930s, and representatives of New Directions from the 1960s.[1]

The Main Building has a vast display of militaria ranging from 12th to 20th century, including Polish armor from 16th and 17th centuries, Polish sabers, firearms, saddles and caparisons, military uniforms from 18th to 20th century, military orders, medals and distinctions. The Museum holdings also include a collection of Western and Eastern European weapons. The militaria are presented at the "Arms and Colours" exhibition.

Decorative arts and crafts are exhibited in the Decorative Arts and Crafts Gallery, with gold, silver and precious stone artifacts ranging from twelfth to eighteenth century; copper, pewter and iron objects, such as bowls and wrought iron chests; old furniture, musical instruments, clocks, ceramics and glass, notably stained glass from the churches of Kraków. The Museum has one of Poland's largest collections of Polish and Oriental antique rugs and carpets, as well as a collection of sixteenth to twentieth century costumes. 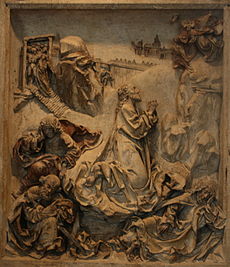 Christ in the Garden of Gethsemane, bas-relief by Veit Stoss.

Exhibition posters are available in the gift shop by the entrance.