The U.S. Navy Museum is one of fifteen official Navy museums,[1] and is part of the Naval History & Heritage Command, the official history program of the United States Navy. 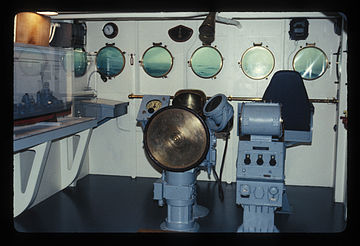 Bridge of the USS Fletcher at the museum

The U.S. Navy Museum was established in 1961 and opened to the public in 1963. As one of 15 Navy museums throughout the country, it is the only one that presents an overview of U. S. naval history. Permanent and temporary exhibitions commemorate the Navy's wartime heroes and battles as well as its peacetime contributions in exploration, diplomacy, space flight, navigation and humanitarian service.

Known for 40 years as the flagship museum of the U.S. Navy, The U.S. Navy Museum celebrates a legacy of educating the public. In the tradition of its predecessors on the Washington Navy Yard beginning in 1865, the current museum features a collection that dates from 1800. The museum's collection moved twice before Admiral Arleigh Burke established the current museum, Building 76, in 1963 to create an American naval history museum comparable to those in Europe. The U.S. Navy Museum continues to embody Burke's vision of sharing the Navy's history and traditions with the world.

The tradition of collecting naval artifacts in the United States began in the early 19th century under the command of Thomas Tingey, the first commandant of the Washington Navy Yard. The first artifact collected was a French gun, cast in 1793 at Lyons, captured during the Quasi-War with France, 1798-1801. From this modest beginning, the collection grew as the U.S. Navy fought in more battles and explored the high seas during the early years of the American republic.

As the Navy's collection of artifacts grew, so did the need for a space in which to display them. In 1865, the former Paint Shop opened as the Museum of Naval Relics and Weapons where the Dispensary is today. This museum was amongst America's earliest federal museums. Listed as one of Washington's most popular tourist attractions in Morrison's Strangers Guide to Washington, the collection impressed visitors with such artifacts as a gun from Spanish conquistador Hernan Cortes's conquest of Mexico, and the sloop Kearsarge's original sternpost containing a shell she received during her fight with the Confederate raider Alabama off the French coast.

In 1913 the museum's artifacts were moved to Building 120, where the museum shared space with the Seaman Gunner's Quarters and the Recruiting Office. This site is now a parking lot west of the Washington Navy Yard. The building was demolished in 1927, which left the Navy's collection of artifacts in storage for eight years. In April 1935, the third museum opened in building 40, at the north end of the Breech Mechanism Shop constructed between 1887 and 1899. When World War II ended the yard officially changed its name to the Naval Gun Factory, so the museum became the Naval Gun Factory Museum. After gun production ceased, Admiral Burke obtained the entire building in 1961 to house a new, and more complete collection of artifacts.

Today The U.S. Navy Museum is the only naval museum to chronicle the history of the U.S. Navy from its creation to the present. Artifacts like USS Constitution's fighting top, the world's deepest diving submersible, Trieste, and the khaki uniform of former Fleet Admiral Chester W. Nimitz make The Navy Museum's collection second to none.

Close to 400,000 individuals visit The U.S. Navy Museum annually. Admission to the museum and its programs is free. The museum is architecturally accessible.

Visiting the National Museum of the U.S. Navy 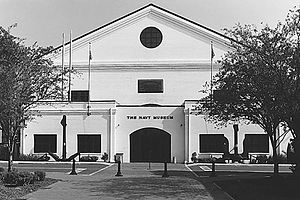 A view of the U.S. Navy Museum as seen from Willard Park. Periscopes from the submarine exhibit are visible to the left.

The National Museum of the United States Navy is open to the public. Upon entering the museum, visitors can see the fighting top from USS Constitution, as well as a statue of Boatswain's Mate Charles W. Riggin made from melted dimes.

Located between the U.S. Navy Museum and the destroyer USS Barry, Willard Park is named for Admiral Arthur L. Willard, Commandant of the Navy Yard from 1927–1930. Alongside the many iron guns on display are a screw from the battleship USS South Dakota (BB-57), a 5-inch gun salvaged from the battleship USS Maine, a bathysphere from the Alvin undersea exploration vehicle, the Swift Boat PCF-1, and a 14-inch naval railway gun from the First World War.

This large room is dedicated entirely to the history of American submarines. The room features a pair of working periscopes, targeting computers, and battle flags.

The American Revolution and the French Alliance

The violent beginning of the U.S. Navy is documented near the entrance of the museum with a video kiosk, weapons and depictions of early American Navy heroes.

The Forgotten Wars of the Nineteenth Century

This exhibit features artifacts from the Quasi-War with France, the First Barbary War and the Second Barbary War, the War of 1812, and the Mexican-American War. The centerpiece of this exhibit is a replica of USS Constitution gun deck.

The Civil War exhibit shows the sorts of warships and equipment used by sailors of the Union and Confederate fleets. Models of the legendary ironclads USS Monitor and CSS Virginia, the commerce raider CSS Alabama, and the USS Kearsarge (1861) are on display.

This exhibit tells the story of the loss of the battleship USS Maine (ACR-1), public outrage and the beginning of the United States as a global power. On display are a number of weapons, items from the home front, a model and diagram of the strange USS Vesuvius (1888), and the uniform of Admiral George Dewey.

The story of Admiral Richard Byrd's 1928 voyage to the South Pole is told through photographs and equipment from his and other subsequent voyages.

Vitally important throughout history, navigational techniques and various pieces of equipment are explained in a small exhibit on the history of navigation at sea. The room is filled with charts, chronometers and meteorological equipment.

U.S. Navy in World War I

This exhibit detailing the U.S. Navy’s brief involvement in the First World War explains the dangerous task of submarine-hunting and showcases models of warships of the period, a captured German flag and footage of a U.S. Navy railway gun in action.

In Harm's Way, The Navy in World War II

The largest section of the museum, In Harm's Way is divided into three sections.

Uniforms and equipment, along with videos and other artifacts, bring the often-ignored Korean War into focus. Captured Soviet weapons, models of aircraft and warships and even a chunk of the Inchon seawall are on display.

The deep submergence vehicle Trieste is the highlight of the Undersea Exploration exhibit. A small exhibit on the Steel Navy (1883–1909) is in the north end, as well as on the Battle of Trafalgar, which features a short film on naval artillery based on Master and Commander: The Far Side of the World.

There are fourteen other official Navy museums:[1]

The following museums are not listed on the list of "Official U.S. Naval Museums" in the footnote at the top of this section: