From Infogalactic: the planetary knowledge core
Jump to: navigation, search
This article is about the historic road of the United States. For other uses, see National roads.

The National Road (also known as the Cumberland Road) was the first major improved highway in the United States to be built by the Federal Government. About 620 miles (1,000 km) long, the National Road connected the Potomac and Ohio Rivers and was a gateway to the West for thousands of settlers. When rebuilt in the 1830s, the Cumberland Road became the first U.S. road surfaced with the macadam process pioneered by Scotsman John Loudon McAdam.[1]

Construction began heading west in 1811 at Cumberland, Maryland, on the Potomac River.[2] It crossed the Allegheny Mountains and southwestern Pennsylvania, reaching Wheeling, Virginia (now West Virginia), on the Ohio River in 1818. Subsequent efforts pushed the Road across the states of Ohio and Indiana. Plans were made to continue through St. Louis, at the confluence of the Mississippi and Missouri Rivers, and to the territorial capital of Jefferson City of the Missouri Territory (previously the old Louisiana Purchase of 1803, and the later part of which became the State of Missouri), upstream on the Missouri River. After the Financial Panic of 1837 and the resulting economic depression, however, Congressional funding ran dry and construction was stopped at Vandalia, Illinois, the territorial capital of the Illinois Territory, northeast of St. Louis and the Mississippi River.

Beyond the National Road's eastern terminus at Cumberland and toward the Atlantic coast, a series of private Toll roads and turnpikes were completed in 1824, connecting the National Road (also known as the "Old National Pike") with Baltimore, Maryland, then the third largest city in the U.S.A., and its major maritime port on Chesapeake Bay; these feeder routes formed what is referred to as an eastern extension of the federal National Road. In 1835, the road east of Wheeling was turned over to the several states for either state maintenance or operation as a private regulated franchise as a turnpike. The road's route between Baltimore and Cumberland continues to use the name National Pike or Baltimore National Pike and as Main Street in Ohio today, with various portions now signed as U.S. Route 40, Alternate U.S. 40, or Maryland 144. A spur between Frederick, Maryland, and Georgetown in Washington, D.C., now Maryland Route 355, bears various local names but is sometimes referred to as the Washington National Pike;[citation needed] it is now paralleled by Interstate 270 between the Capital Beltway (I-495) and Frederick.

Today, much of the alignment is followed by U.S. Route 40, with various portions bearing the Alternate U.S. Route 40 designation, or various state-road numbers (such as Maryland Route 144 for several sections between Baltimore and Cumberland). The full road, including extensions east to Baltimore and west to St. Louis, was designated "The "Historic National Road", an All-American Road" in 2002, and the later constituting of a supporting organization of "National Road" enthusiasts, historians, engineers and state officials.[3]

The Braddock Road had been opened by the Ohio Company in 1751 between Fort Cumberland, the limit of navigation on the upper Potomac River, and the French military station at Fort Duquesne at the forks of the Ohio River, (at the confluence of the Allegheny and Monongahela Rivers), an important trading and military point where the city of Pittsburgh now stands. It received its name during the colonial-era French and Indian War of 1753-1763, (also known as the Seven Years' War in Europe) when it was used by British General Edward Braddock accompanied by Colonel George Washington of the Virginia militia regiment in the ill-fated July 1755 Braddock expedition, an attempt to assault Fort Duquesne, (future Fort Pitt, later the city of Pittsburgh in modern Pennsylvania), occupied by the forces of the Kingdom of France from their bases further north in "New France" (modern Canada), along the St. Lawrence River in the towns/forts of Quebec and Montreal. 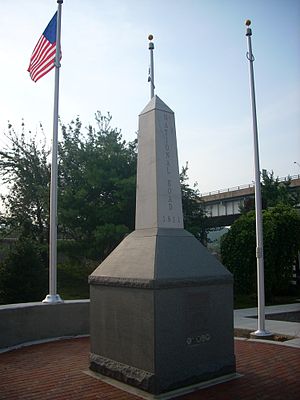 Construction of the "Cumberland Road" (which later became part of the longer "National Road") was authorized on March 29, 1806, by third President Thomas Jefferson. The new "Cumberland Road" would replace the wagon and foot paths of the "Braddock Road" for travel between the Potomac and Ohio Rivers, following roughly the same alignment until just east of Uniontown, Pennsylvania. From there, where the "Braddock Road" turned north towards Pittsburgh, the new "National Road"/"Cumberland Road" would continue west to Wheeling, West Virginia (then part of Virginia), also on the Ohio River.

The contract for the construction of the first section was awarded to Henry McKinley on May 8, 1811,[4] and construction began later that year, with the road reaching Wheeling on August 1, 1818. For more than 100 years, a simple granite stone was the only marker of the Road's beginning in Cumberland, Maryland. In June 2012, a monument and plaza were built in that town's Riverside Park, next to the historic original starting point. 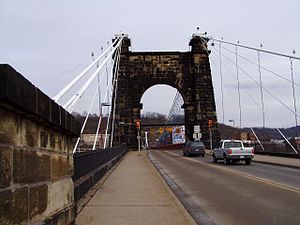 The Wheeling Suspension Bridge across the Ohio River, completed in 1849 and still in use by local traffic.

On May 15, 1820, Congress authorized an extension of the road to St. Louis, on the Mississippi River, and on March 3, 1825, across the Mississippi to Jefferson City, Missouri. Work on the extension between Wheeling and Zanesville, Ohio, used the pre-existing Zane's Trace of old Ebenezer Zane, and was completed in 1833 to the new state capital of Columbus, Ohio, and in 1838 to the college town of Springfield, Ohio.

In 1849, a bridge was completed to carry the National Road across the Ohio River at Wheeling. The Wheeling Suspension Bridge, designed by Charles Ellet Jr., was at the time the world's longest bridge span at 1,010 feet (310 m) from tower to tower. 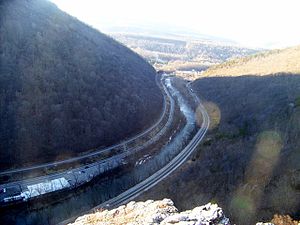 The Cumberland Narrows west of Cumberland, part of the realigned routing

Maintenance costs on the Cumberland Road were becoming more than Congress was willing to bear. In agreements with Maryland, Virginia, and Pennsylvania, the road was to be reconstructed and resurfaced. The section that ran over Haystack Mountain, just west of Cumberland, was abandoned and a new road was built through the Cumberland Narrows.

On April 1, 1835, the section from Wheeling to Cumberland was transferred to Maryland, Pennsylvania, and Virginia (now West Virginia). The last Congressional appropriation was made May 25, 1838, and in 1840 Congress voted against completing the unfinished portion of the road, with the deciding vote being cast by Henry Clay. By that time, railroads were proving a better method of long-distance transportation, and the Baltimore and Ohio Railroad was being built west from Baltimore to Cumberland, mostly along the Potomac River, and then by a more direct route than the National Road across the Allegheny Plateau of West Virginia (then Virginia) to Wheeling. Construction of the National Road stopped in 1839. Much of the road through Indiana and Illinois remained unfinished and was later transferred to the states. 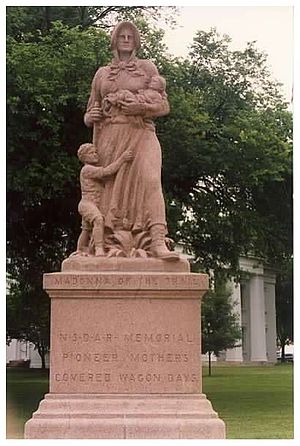 Madonna of the Trail monument along the Old National Road in Vandalia, Illinois

In 1912, the Cumberland National Road was chosen to become part of the National Old Trails Road, which would extend further east to New York City and west to San Francisco, California. Five Madonna of the Trail monuments, donated by the Daughters of the American Revolution, were erected along the old National Road.

The more recently constructed Interstate 68 parallels the old road from Hancock through Cumberland west to Keyser's Ridge, Maryland, where the National Road and U.S. 40 turn northwest into Pennsylvania, but I-68 continues directly west to meet Interstate 79 near Morgantown, West Virginia. The portion of I-68 in Maryland is designated as the National Freeway. 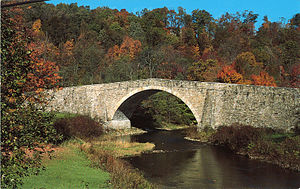 The Casselman River Bridge in western Maryland in 1979
File:AUT 0345.JPG
Mile marker along the National Road in Columbus, Ohio.

Many of the National Road's original stone arch bridges also remain on former alignments. Notable among these is the Casselman River Bridge near Grantsville, Maryland; built in 1813-1814, it was the longest single-span stone arch bridge in the world at the time.

The Wheeling Suspension Bridge across the Ohio River, opened in 1849, is the oldest vehicular suspension bridge in the United States still in use. A newer bridge carries I-70 and the realigned U.S. 40 across the river nearby. The original bridge is listed as both a National Historic Landmark and a Historic Civil Engineering Landmark.

One of the road's original toll houses is preserved in La Vale, Maryland, and two others are located in Addison, Pennsylvania, and near Uniontown, Pennsylvania; they are known as the La Vale Tollgate House, Petersburg Tollhouse, and Searights Tollhouse respectively.

Many mile markers can still be found along the National Road, some well-maintained, others deteriorating, and yet others represented by modern replacements.

Various sections of brick pavement, built in the early twentieth century, are still in use on little-traveled alignments, particularly in eastern Ohio. 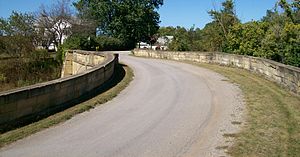 The S Bridge on the National Road east of Old Washington, Ohio

The western terminus of the National Road at its greatest extent was at the Kaskaskia River in Vandalia, Illinois, near the intersection of modern U.S. 51 and U.S. 40. The road proceeded east along modern U.S. 40 through south central Illinois. The National Road continued into Indiana along modern U.S. 40, passing by the cities of Terre Haute and Indianapolis. Within Indianapolis, the National Road used the original alignment of U.S. 40 along West Washington and East Washington streets (modern U.S. 40 is now routed along I-465). East of Indianapolis, the road went through the city of Richmond before entering the state of Ohio. In Ohio, the road continued along modern U.S. 40 and passed through the northern suburbs of Dayton, Springfield, and the city of Columbus. West of Zanesville, Ohio, despite U.S. 40's predominantly following the original route, many segments of the original road can still be found. Between Old Washington and Morristown, the original roadbed has been overlaid by I-70. The road then continued east across the Ohio River into Wheeling in West Virginia, the original western end of the National Road when it was first paved. After running 15 miles (24 km) in West Virginia, the National Road then entered Pennsylvania. The road cut across southwestern Pennsylvania, heading southeast for about 90 miles (140 km) before entering Maryland. East of Keyser's Ridge, the road used modern Alternate U.S. 40 to the city of Cumberland (modern U.S. 40 is now routed along I-68). Cumberland was the original eastern terminus of the road. In the mid-19th century, a turnpike extension to Baltimore — along what is now Maryland Route 144 from Cumberland to Hancock, U.S. 40 from Hancock to Hagerstown, Alternate U.S. 40 from Hagerstown to Frederick, and Maryland Route 144 from Frederick to Baltimore — was approved. The approval process was a hotly debated subject because of the removal of the original macadam construction that made this road famous. 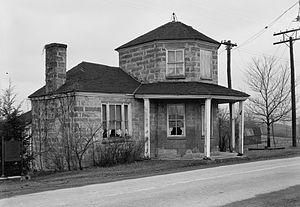 The Petersburg Tollhouse, on the National Road in Addison, Pennsylvania 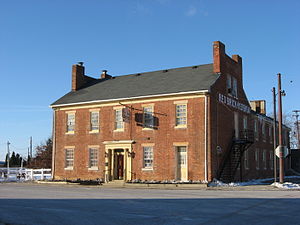 The Red Brick Tavern along the National Road in Lafayette, Ohio