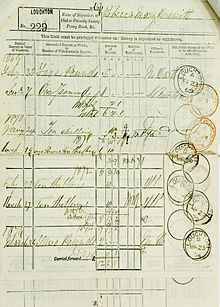 From the 1860s onwards, the customer would take their deposit book, such as this 1869 example, to a Post Office each time they made a transaction. 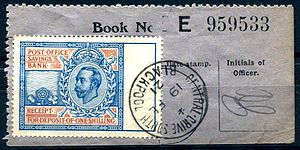 A 1921 receipt for a deposit of one shilling in the Post Office Savings Bank. 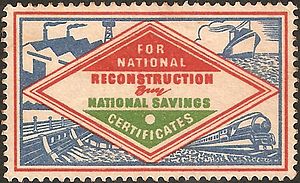 A publicity stamp from around the end of the Second World War urging investors to buy National Savings Certificates for National Reconstruction. 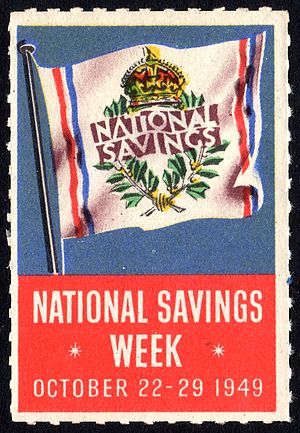 National Savings and Investments (NS&I), formerly called the Post Office Savings Bank and National Savings, is a state-owned savings bank in the United Kingdom. It is both a non-ministerial government department[1] and an executive agency of the Chancellor of the Exchequer.[2] Historically, the aim of NS&I has been to attract funds from individual savers in the UK for the purpose of funding the government’s public sector borrowing requirement (i.e., the funds in excess of taxation that the government requires to fund its expenditure). NS&I attracts savers through offering savings products with tax-free elements on some products, and a 100% guarantee from H.M. Treasury on all deposits. However, its interest rates are often low.

National Savings and Investments was founded by the Palmerston government in 1861 as the Post Office Savings Bank, the world's first postal savings system. The aim of the bank was to allow ordinary workers a facility "to provide for themselves against adversity and ill-health", and to provide the government with access to debt funding. As an example, savings certificates were issued in World Wars I and II to help finance the war effort. On 1 June 1957, the Premium Bonds draws were inaugurated, using E.R.N.I.E. – the Electronic Random Number Indicator Equipment machine (now located in the Science Museum).

The name was changed again in 2002 to National Savings and Investments.[3]

The current graphic identity of NS&I, including the NS&I logotype, was created in 2005 by Lloyd Northover, the British design consultancy founded by John Lloyd and Jim Northover.[4]

NS&I manages around £100 billion in savings,[5] As funds from NS&I have historically been a relatively cheap source of government borrowing, the bank has set interest rates both to attract savers and provide low-cost finance for the government. 100% of savings are government guaranteed.

NS&I's head office is in Pimlico, London, with operational sites in Blackpool, Glasgow and Durham. However, its entire back office operation is contracted out to a French company, Atos IT Solutions and Services. Until July 2011, the contract was held by Siemens IT and Solutions. In the past, it offered many of its services through post offices, and was founded in 1861 as a postal savings system. In November 2011, it was announced that most products would only be available by telephone, online, or by post. Premium Bonds would be the only remaining product sold in post offices.[6] From 1 August 2015, NS&I stopped selling Premium Bonds through post offices, and became a purely direct business.[7]

NS&I offers a wide range of savings and investment products, specialising in tax-free and income-generating products:

Products which are no longer on sale with NS&I include:

All savings and investment products are 100% backed by HM Treasury.